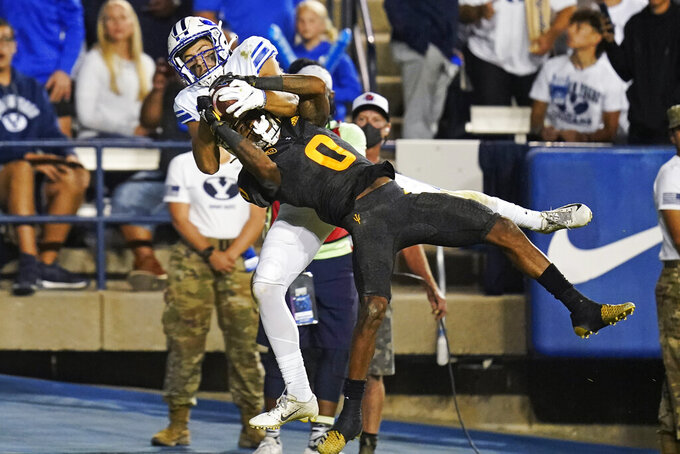 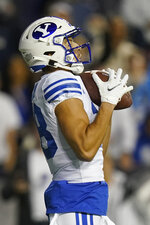 PROVO, Utah (AP) — Forcing turnovers and getting big plays at critical junctures from Jaren Hall is turning into a proven winning formula for BYU.

Hall threw for 214 yards and two touchdowns and added 38 yards on seven carries, leading No. 23 BYU to a 27-17 victory over No. 19 Arizona State on Saturday night.

Jaylen Daniels threw for 265 yards to lead the Sun Devils (2-1), but also tossed a pair of interceptions. Danyiel Ngata ran for 82 yards and a touchdown to lead Arizona State’s ground attack.

In addition to committing multiple turnovers, the Sun Devils racked up 16 total penalties and 121 penalty yards.

“We have the makings of a good football team,” Arizona State coach Herm Edwards said. “But when you do this, it’s not good football at all. It’s hard to watch when you’re going backward, and you just defeat yourself.”

Arizona State cut a double-digit halftime deficit to 21-17 late in the third quarter with back-to-back scoring drives. Ngata covered 51 yards on four straight runs and scored on a 10-yard sweep. Then, Christian Zendejas added a 40-yard field goal on the ensuing drive.

The Sun Devils appeared poised to go ahead before the third quarter ended after Merlin Robinson intercepted Hall at the ASU 25. Tyler Allgeier chased down Robinson as he ran along the sideline and punched the ball out of his hands, forcing a fumble that Hall recovered at the BYU 15.

“Tyler just went back to linebacker mode and saved the game for us,” BYU tight end Isaac Rex said. “That play was, by far, the biggest play of the game for us.”

The Cougars sealed the win after backup quarterback Baylor Romney tossed a 3-yard touchdown pass to Rex with 1:19 left. Romney came into the game after Hall was injured at the end of a QB run with 2:22 remaining.

Hall told reporters after the game he had not suffered a serious injury and expected to be back at practice on Monday.

Hayden Livingston recovered a fumble on the opening kickoff, giving BYU the ball at the Sun Devil 12. Allgeier put the Cougars up 7-0, plowing across the goal line on a 2-yard run three plays later.

He completed 11 of his first 12 passes to help Arizona State regain some momentum. Daniels’ 58-yard strike to Andre Johnson set up Rachaad White’s 1-yard run that evened the score 7-all early in the first quarter.

The Cougars capitalized when Daniels finally made a mistake in the second quarter. Max Tooley picked off a pass from Daniels at the BYU 17. The Cougars covered 83 yards in six plays and took a 14-7 lead on a double-pitch flea-flicker to Hall that he promptly turned into a 34-yard pass to a wide-open Gunner Romney in the end zone.

“It starts with me,” Daniels said. “I got to play better always, no matter what.”

Hall’s second touchdown pass, a 15-yard strike to a wide-open Rex, extended BYU’s lead to 21-7 late in the second quarter.

The redshirt sophomore finished with his second career 200-yard passing game and a belief that the Cougars are just scratching the surface on becoming a passing threat.

“We could definitely open up the pass game — more yards and more points,” Hall said. “I feel like I can be better, but our offensive line has just been killing it.”

Arizona State: Early turnovers created huge problems for the Sun Devils. Arizona State had a fumble and two interceptions before halftime and those takeaways set up two of BYU’s first three scoring drives.

Romney’s touchdown pass was his first pass of the season for BYU. Still, it wasn’t his only big moment for the Cougars. The redshirt sophomore made a pair of starts in 2019 while Zach Wilson was sidelined with a thumb injury. Romney led the Cougars to wins over Boise State and Liberty that season, before Wilson returned.

His past success running the offense made the BYU coaches not think twice about dialing up a pass play for Romney after the Cougars ran 11 straight plays up to that point.

“He has a great demeanor about him,” BYU coach Kalani Sitake said. “A lot of confidence in himself and his abilities.”

Daniels eclipsed 4,000 career passing yards with his third completion of the game. He now has 4,216 yards in 19 career games at Arizona State.

BYU will move a few spots in the AP Top 25 Poll after beating a ranked opponent at home. Arizona State could drop out of the poll after the loss.