No. 24 Louisiana visits Troy with division under wraps 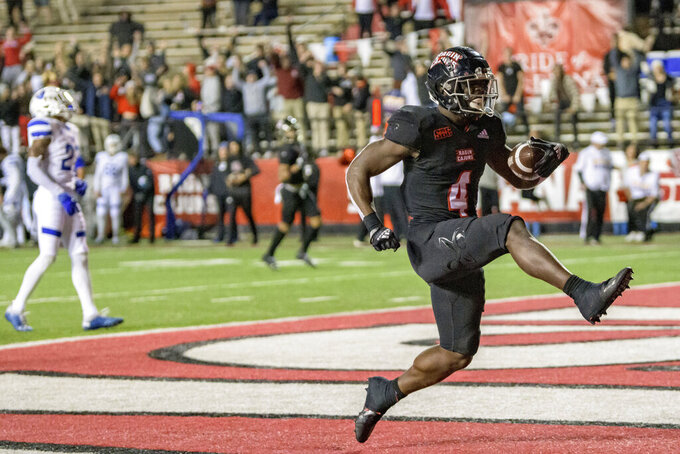 Louisiana-Lafayette running back Montrell Johnson (4) high-steps in the end zone on a touchdown during the second half of the team's NCAA college football game against Georgia State in Lafayette, La., Thursday, Nov. 4, 2021. (AP Photo/Matthew Hinton)

Louisiana-Lafayette has already won its division in the Sun Belt Conference and now the Ragin’ Cajuns have their sights on one more big reward.

“I think that’s the next kind of carrot that we can hang out there with the team,” Louisiana coach Billy Napier said. “I think homefield advantage, obviously, would be crucial.

“If anybody knows that we know that. Motivation is not going to be a factor here.”

Louisiana (8-1, 6-0) has already clinched the Sun Belt West Division title for the fourth straight year and has won eight straight since dropping the opener against Texas. Coastal Carolina and Appalachian State are both 4-1 in the East Division, but Louisiana beat the Mountaineers.

The Trojans (5-4, 3-2) are 6.5-point underdogs according to FanDuel Sportsbook and a win away from bowl eligibility.

They've won three of their last four games, including a victory over in-state rival South Alabama.

“I feel we are playing our best football now,” Trojans coach Chip Lindsey said. “I think we are an improving team that I’ve seen mature and grow as the season’s gone.”

The Ragin’ Cajuns have won four games by four points or less this season.

“I’m hopeful that we could put it together more consistently, is what I would say,” Napier said. “I think we’ve been a little bit up and down, which is certainly not the way you want to be.”

The Trojans, meanwhile, are 3-3 in games decided by eight points or less.

Cajuns quarterback Levi Lewis took advantage of the extra year of eligibility the NCAA granted during the coronavirus pandemic and is now playing a fifth season for the Ragin’ Cajuns. As a starter, he’s gone 30-7 and earlier this season broke Jake Delhomme all-time school mark of 64 touchdowns passing.

Lewis, who now has 66 career TDs passing, threw for 287 yards against Georgia State last week, his second most yards passing this season and sixth most of his career.

A ninth straight victory overall this season also would give Louisiana-Lafayette a school-record winning streak. A win also would make Cajun Field the site of the Sun Belt Conference championship game for the first time.

“I’ve been here for four years now and don’t have a championship, even though I’ve got these other things we’ve done as a team,” Cajuns punter Rhys Byrns said. “We still don’t have that main championship, so to do it in front of our fans would be a crazy day and one we’d remember forever.”

“Any time you get a chance to play a ranked opponent, especially at home, it presents a great opportunity,” Lindsey said. “And that makes it exciting.

“That’s a big deal. It just brings more to the game.”