No. 3 Georgia begins title defense against No. 11 Oregon 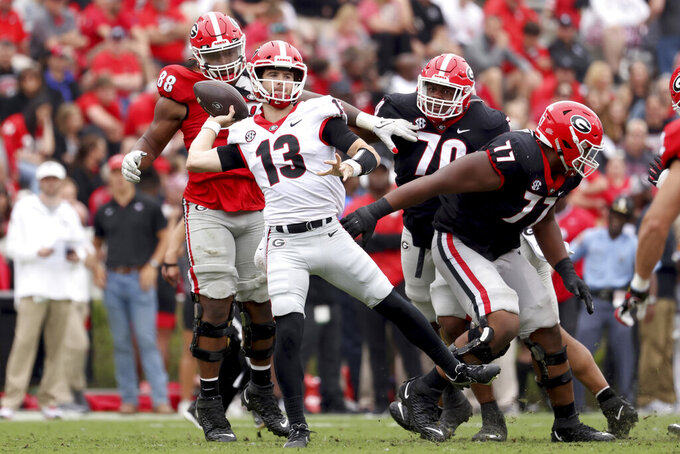 Line: Georgia by 16 1/2 according to FanDuel Sportsbook.

Georgia is looking to get started on another national championship season against the lone currently ranked team among its first 10 opponents. If the Bulldogs get by this one, the only other stiff test on their regular-season schedule would appear to be at No. 20 Kentucky in mid-November. Oregon 's Dan Lanning makes his head coaching debut against the team where he spent the last three years as co-defensive coordinator.

The Ducks' experienced offensive line against Georgia's defense. The Bulldogs had one of the great units in college football a year ago, with a staggering five players going on to be first-round NFL draft picks. But Georgia still has plenty of talent led by DL Jalen Carter, OLB Nolan Smith and DBs Kelee Ringo and Christopher Smith.

Oregon: QB Bo Nix. While Lanning declined to name a starting quarterback, Georgia is fully expecting to see a familiar face in the former Auburn signal-caller. “I know who the quarterback is going to be. I'm not worried about that,” Bulldogs coach Kirby Smart said. Nix transferred to Oregon after starting the last three seasons for Auburn, where he went 0-3 against Georgia.

Georgia: QB Stetson Bennett. After a storybook season that culminated with him being selected offensive MVP of both College Football Playoff wins, the former walk-on returns for his sixth college season. Bennett is the firmly established starter for the first time in his career after setting a school record for passing efficiency in 2021.

This is one of two Chick-fil-A Kickoff Games being held on the holiday weekend at Atlanta's Mercedes-Benz Stadium. No. 4 Clemson faces Georgia Tech on Monday night at the 75,000-seat home of the NFL's Atlanta Falcons. ... Georgia and Oregon are meeting for only the second time. Georgia defeated Oregon 27-16 at Sanford Stadium in 1977. ... Georgia had 15 players selected in the NFL draft, a record-for the seven-round era. ... The Ducks will wear a special decal on their helmets all season to honor tight end Spencer Webb, who died after falling and striking his head at a popular swimming spot in Eugene. ... Lanning was on Smart's staff at Georgia the last four seasons — three as the co-defensive coordinator with Glenn Schumann. Former Florida and South Carolina coach Will Muschamp has taken over the co-coordinator role from Lanning, still working alongside Schumann.