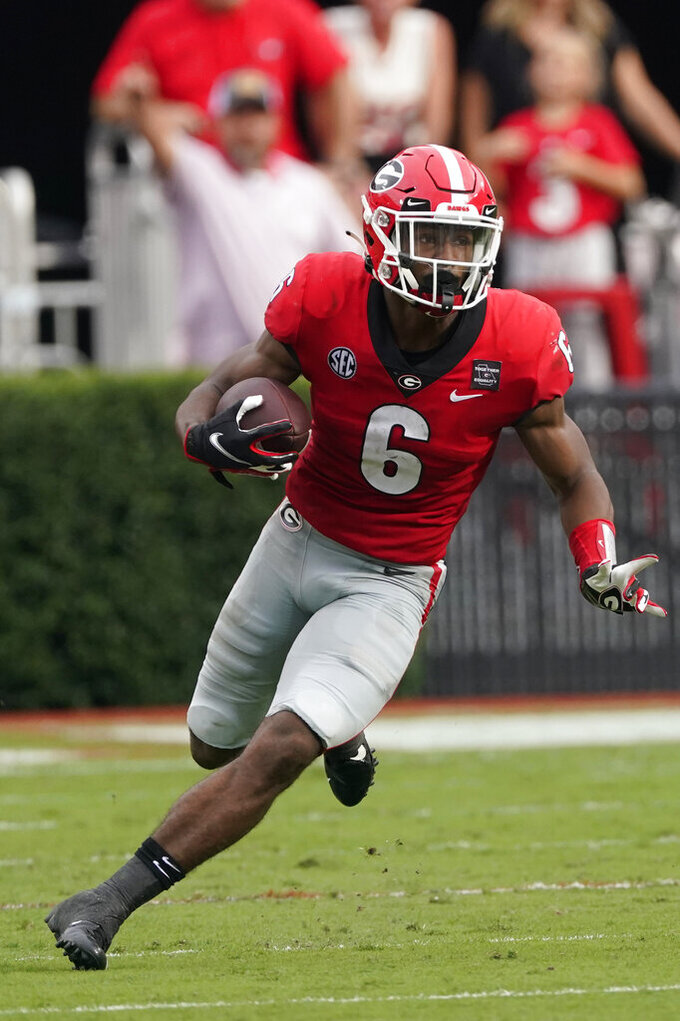 Georgia running back Kenny McIntosh (6) looks for running room in the first half of an NCAA college football game against Tennessee Saturday, Oct. 10, 2020, in Athens, Ga. (AP Photo/John Bazemore) 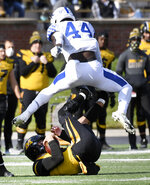 The Bulldogs return from a bye looking to bounce back from a 41-24 loss at No. 2 Alabama after leading 24-20 at halftime. Kentucky also seeks a boost after compiling just 145 yards in a 20-10 loss at Missouri that broke a two-game winning streak. The game was originally slated for Oct. 24 before the SEC rescheduled several games following COVID-19 outbreaks at a couple of schools.

Georgia quarterback Stetson Bennett vs. Kentucky’s defense. Alabama intercepted Bennett three times nearly two weeks ago, a performance he can’t afford against an opportunistic Wildcats defense. Kentucky came up empty trying to create turnovers at Mizzou but registered 10 takeaways over the previous two games, including nine interceptions to rank second in the SEC and nationally.

Georgia punter Jake Camarda ranks second nationally at 50.7 yards per kick and is chasing the school’s single season record. Former All-American Drew Butler averaged 48.1 yards on 56 punts in 2009 to lead the nation and win the Ray Guy Award as the top punter. His competition on Saturday is Kentucky’s Max Duffy, who won the award last season and ranks sixth at 47.5 yards.

Kentucky RB Chris Rodriguez Jr. has taken over the team rushing lead with 305 yards on 55 carries with four touchdowns. The sophomore is just 119 yards away from 1,000 career and has emerged as the Wildcats’ most effective rusher since late last season.

Georgia has won the past 10 series meetings, matching its longest streak from 1978-87. ... The Bulldogs rank fourth nationally in rushing defense (65.5 yards allowed per game) and 19th in scoring defense (19.5 points). ... Georgia redshirt sophomore receiver Kearis Jackson has 21 catches for 323 yards and a touchdown. George Pickens is next with 13 receptions for 140 yards and two TDs. ... Kentucky is 20th nationally in scoring defense (20.0) and 30th in total defense (357.2 yards). ... Wildcats junior safety Yusuf Corker had a career-high 18 tackles at Mizzou including two for loss and a sack. It’s the most for Kentucky since Jordan Jones had 19 against Southern Miss in 2016.