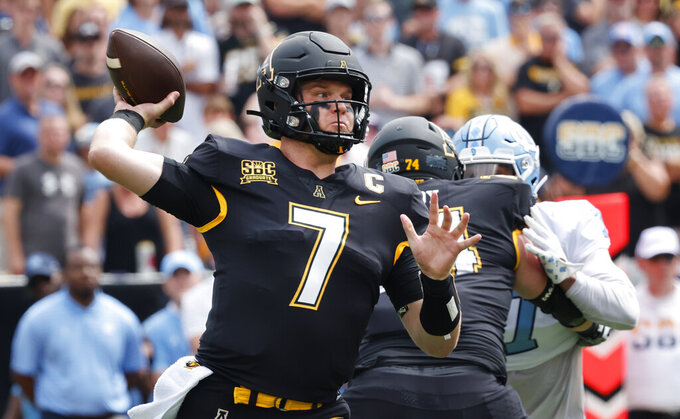 The Aggies got a 31-0 victory over FCS school Sam Houston last week, but are looking to clean some things up and play more consistently Saturday against what should be much tougher competition in the Mountaineers. Appalachian State will try to bounce back after losing a 63-61 thriller to North Carolina in its opener. They’ll look to build on the momentum gained in a stellar fourth quarter where they scored 40 points to rally from a 41-21 deficit to set up the exciting finish.

Texas A&M’s secondary vs. QB Chase Brice. Brice threw for a career-high 361 yards and set a school record with six touchdown passes, including four in the fourth quarter against North Carolina. Now he’ll face a secondary that allowed just 91 yards passing with an interception in the opener.

Appalachian State: RB Nate Noel had 14 carries for 116 yards and two touchdowns against North Carolina. The performance came after a 2021 season where he led the Sun Belt with 1,126 yards rushing.

Texas A&M: WR Ainias Smith had six receptions for a career-high 164 yards with two touchdowns in the opener. His TD receptions were for 63 and 43 yards, illustrating how dangerous he is as a deep threat.

The Mountaineers’ last game against an SEC team was a 20-15 win at South Carolina in 2019. ... This will be Appalachian State’s fourth game in the state of Texas. ... Appalachian State OLB Nick Hampton had 2 ½ sacks and forced a fumble in the opener. ... Texas A&M QB Haynes King had three touchdowns with a career-high 364 yards passing in Week 1. ... The Aggies haven’t allowed a touchdown at home in 12 straight quarters dating to last season. ... Texas A&M is 22-4 at home under coach Jimbo Fisher. ... The Aggies are 25-0 under Fisher when leading after the first quarter.