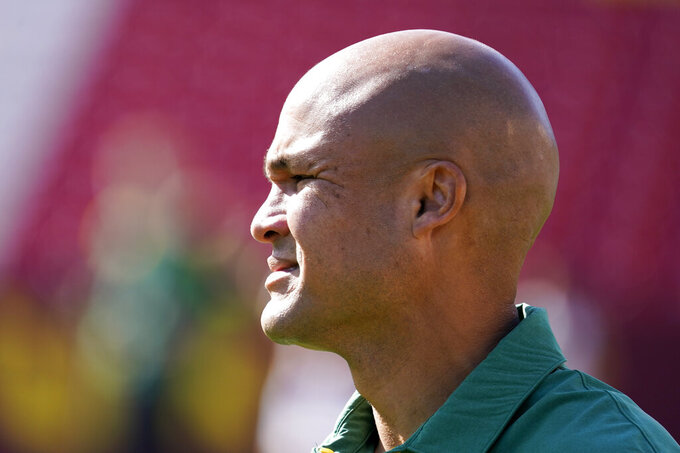 WACO, Texas (AP) — Ninth-ranked Oklahoma State came up only inches short of a Big 12 championship in its last meeting against Baylor.

“We use it to fuel us," Cowboys running back Dominic Richardson said this week.

Nearly 10 months after that Big 12 title game loss, when running back Dezmon Jackson was knocked out of bounds just short of the end zone on a desperate fourth-down dive in the final seconds, Oklahoma State (3-0) plays its Big 12 opener Saturday at defending champion and No. 16 Baylor (3-1, 1-0 Big 12).

“It'll set the tone for Big 12 play. There are only three undefeated (Big 12) teams ... I'd like to stay in that group,” OSU defensive end Brock Martin said. “Being undefeated is a major deal to make it to the final goal of the playoffs and national championship. Obviously, that's something we want to do.”

Jackson and Jairon McVea, the Baylor safety that kept him from scoring, were both seniors and no longer on the teams that both hope will be back at AT&T Stadium on the first Saturday of December for another title chance.

With so much attention on the rematch against the Cowboys, whose only Big 12 title was in 2011, Baylor coach Dave Aranda anticipates that his players will be amped up probably more than he would like them to be. His emphasis to them is to keep the focus inward, like they did in a conference-opening win at Iowa State last week.

“It's still great energy. It's a conference game,” said cornerback Lorando “Snaxx” Johnson. “But I wouldn't say it's because of them.”

But since the senior dual-threat quarterback's four picks in the Big 12 title game, he has thrown for 1,287 yards, run for 235 and accounted for 17 TDs (14 passing, three rushing) in Oklahoma State's past four games, including a bowl win over Notre Dame. He has only one interception and three four-TD games in that span.

Blake Shapen was filling in for injured starter Gerry Bohanon when he completed his first 17 passes with three touchdowns for Baylor in the 21-16 Big 12 championship victory. Shapen is now the outright starter, having won the job in the spring before Bohanon transferred to South Florida.

Shapen has only one interception this season while completing 69 of 100 passes for 773 yards and seven TDs, three of those last week at Iowa State.

“Their concept offensively from the outside looking in is the same as it was in the championship game," Cowboys coach Mike Gundy said of Shapen. "He might complete 14 passes in a game, and it may only be for 75 yards, but three or four of them might be converting third downs. It looks like they've programmed him in that direction until they play action, max protect, and try to throw it over your head."

True freshman running back Richard Reese had five rushing touchdowns in Baylor's first two home games, and added another last week on the road when he was the team's leading rusher for the third time this season.

With Taye McWilliams missing the past two games in concussion protocol, and likely out again Saturday, Reese has gotten 40 carries even without starting those games.

“His improvement says so much just about him and about his ability to learn and his ability to take coaching,” Aranda said. “He's just way selfless.”

MORE TO THE STORY

When the Cowboys last played in Waco to end the 2020 regular season, it was a game that had been pushed back nearly two months because of the pandemic. Oklahoma State won 42-3 against the very shorthanded home team.

Because of injuries and COVID-19, either positive tests or contact tracing, the Bears that night were without 47 people — players, coaches and support personnel. There was only one full-time offensive assistant coach at the game to close out Aranda’s first season with a 2-7 record after initially being unable to have spring drills with their new coaching staff.

Baylor has since won its last nine home games.

Oklahoma State has had 13 different players score a touchdown this season. The Cowboys are one of seven teams to have that many players get in the end zone, but Alabama, Kansas, Michigan, North Carolina State, UCLA and Western Kentucky have all played one more game.