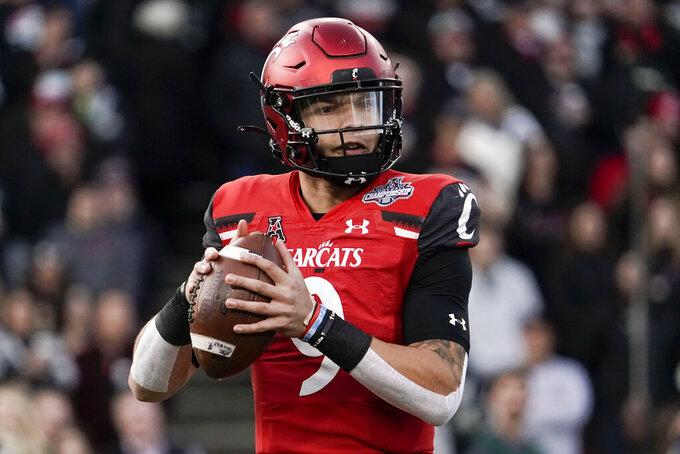 FILE - Cincinnati quarterback Desmond Ridder (9) looks to pass from the pocket during the first half of the American Athletic Conference championship NCAA college football game against Houston Saturday, Dec. 4, 2021, in Cincinnati. The fourth-ranked Bearcats (13-0) get their shot in the CFP semifinal Cotton Bowl on Friday, Dec. 31 against No. 1 defending national champion Alabama. (AP Photo/Jeff Dean, File)

ARLINGTON, Texas (AP) — Cincinnati quarterback Desmond Ridder and the breakthrough Bearcats aren’t caught up in what their unprecedented playoff appearance could eventually mean for other non-Power Five teams. This is their journey.

After a season-long debate about whether the outsider deserved a spot in the College Football Playoff, and being the only team to win every game along the way, the fourth-ranked Bearcats (13-0) get their shot in the CFP semifinal Cotton Bowl on Friday against top-ranked defending national champion Alabama.

“We’ve already had so much pressure on us throughout the entire season of marking off the checklist, so why add the pressure of every other non-Power Five school that we have on our back,” Ridder said. “It’s really just been about us and will always continue to be about us.”

The SEC champion Crimson Tide (12-1) is the playoff standard bearer. This is Alabama's seventh semifinal appearance in the eight seasons of the four-team CFP.

But the Tide most likely wouldn’t have made it back without Heisman Trophy winning-quarterback Bryce Young leading a late game-tying, 97-yard TD drive in the regular-season finale against Auburn that ended in an overtime win. The sophomore first-year starter then set an SEC championship game record with 421 yards passing in a 41-24 victory over Georgia, which was undefeated before then and plays Michigan at the Orange Bowl in the other CFP semifinal.

“It’s always challenging when you come off of winning a championship for players to have the same hunger, to have a sense of urgency to prove something,” said Alabama coach Nick Saban, who has six national titles the past 12 seasons. “But because we were young, I think it took this team a little longer to maybe respond on a consistent basis like we wanted them to.”

Ridder is among more than 30 Cincinnati seniors, many who decided to return for an extra year with coach Luke Fickell after the Bearcats went 9-1 last season with the only loss being 24-21 when Georgia kicked a last-second field goal in the New Year’s Six Peach Bowl.

“I’ve had a great experience over my five years here, and I’m just hoping we can seal it off with one of the best experiences there is,” said Ridder, a potential NFL first-round pick who holds the American Athletic Conference and school record with 12,280 career total yards.

“To be here and not take advantage of it would be a real regret,” tight end Josh Whyle said.

Before sweeping through the American Athletic Conference, the Bearcats won 24-13 at Notre Dame the first Saturday of October. That was the only loss for the Fighting Irish, who wound up fifth in the final CFP rankings on Dec. 5 and the first team out while Cincinnati made history.

Cincinnati still goes into the Cotton Bowl as a 13½-point underdog, according to FanDuel Sportsbook.

“Sauce” Gardner was a scrawny 160-pound freshman when he arrived at Cincinnati, and receiver Jameson Williams blossomed at Alabama after playing for Ohio State the past two seasons. Both are All-Americans this season.

Gardner has never given up a touchdown in coverage at Cincinnati, and hasn’t given up a catch inside the Bearcats 20 this season.

SUCCESS IN CFP AND AT JERRYWORLD

Alabama is 8-3 in CFP games and has won its last five semifinal games since a loss to Ohio State, with Fickell as the defensive coordinator, in the first year of the four-team playoff at the end of the 2014 season.

The Crimson Tide are 5-0 at AT&T Stadium, two of those CFP semifinal games in the home of the NFL’s Dallas Cowboys. They beat Michigan State 38-0 in the Cotton Bowl six years ago, and last New Year’s Day won 31-14 over Notre Dame in a Rose Bowl moved from Pasadena because of COVID-19 restrictions in California.

RUNNING FOR THE TIDE

Brian Robinson, finally Alabama’s featured running back in his fifth season, has 1,071 yards and 14 touchdowns rushing.

Bearcats leading rusher Jerome Ford spent two seasons at Alabama before transferring to Cincinnati two years ago. Ford, who said this week that he would “appreciate if people stopped calling me the Alabama transfer,” has 1,242 yards and 19 TDs in his second season with the Bearcats, his first as the starting tailback.