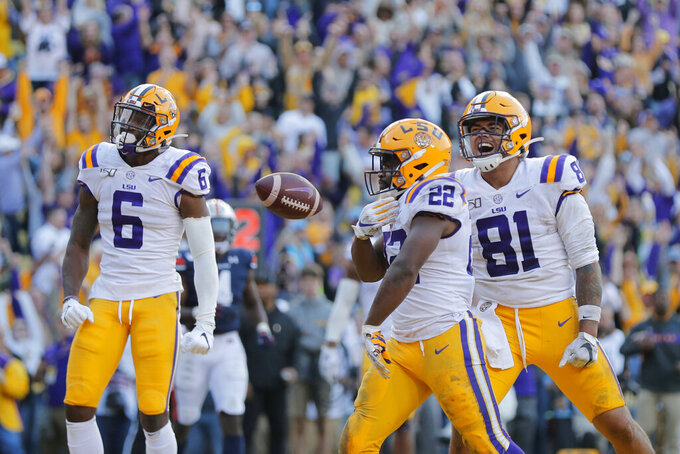 Gary Danielson has called the last 12 Alabama-LSU regular-season games for CBS Sports, including the Game of the Century in 2011, a No. 1 vs. No. 2 matchup that produced not one touchdown.

Before Danielson does the next Alabama-LSU game Saturday, another 1-2 event in Tuscaloosa, he planned to re-watch that '11 slugfest.

"One, to get into the mood. I don't really need it, but I kind of want to," Danielson said. "And the other is to get the feel of how much football has changed since then."

College football's most recent offensive revolution started in 2007 and is about to reach the final frontier: The Alabama-LSU rivalry.

The top-ranked Tigers (8-0) and No. 2 Crimson Tide (8-0) are playing a brand of football that bears little resemblance to the 2011 game, which LSU won 9-6 in overtime. This season, Alabama and LSU rank in the top five nationally in scoring, yards per play and — the one the really stands out — passing yards per game. With Joe Burrow pulling the trigger for the Tigers and Tua Tagovailoa leading Nick Saban's Tide, Alabama and LSU average a combined 715 yards passing and 95 points per game.

The star quarterbacks have combined to throw 57 touchdown passes, and that's with Tagovailoa having missed the last game and a half. The SEC these days looks more like the Big 12.

So what happened? Are the days of teams winning championships with dominant defenses complimented by conservative offenses over?

"You just can't do that anymore because there are too many capable offenses that can move the ball at will even against some of the best defenders," said former Alabama quarterback and current ESPN analyst Greg McElroy, who won a national title with the Crimson Tide in 2009 while throwing 17 touchdown passes in 14 games.

Points and yards in college football have been steadily increasing for decades, but there was a surge in 2007 when Bowl Subdivision teams averaged a record 28.4 points and 392.6 yards per game. After a little regression the next year, it's been up, up and away ever since.

The 2011 season was the last in which FBS teams averaged fewer than 400 yards per game and 5.7 yards per play. With spread offenses, um, spreading and pace-pushers following Oregon's up-tempo lead, teams averaged 28.3 points per game that season — a mark that has been surpassed every season since.

The SEC, while in the middle of a long run of national titles, was mostly still playing slow and steady on offense and relying on smothering defenses. It was seventh among 11 FBS conferences in scoring at 27.3 point per team per game in 2011 and ranked last in yards per team per game at 355. That was 15 yards fewer than the next lowest BCS league (Big East at 371.6) and almost 100 yards fewer than Big 12 teams (453.3).

The Crimson Tide won the national championship in 2011, winning a rematch with LSU in the BCS title game 21-0. That Alabama team is the last in major college football to hold its opponents below 10 points per game for a season (8.2).

This year, SEC teams are averaging 30.25 points per game, fourth among 10 FBS conferences, and 420.2 yards per game, second only to American Athletic Conference teams at 432.1.

To be clear: Alabama and LSU have usually had offenses that statistically rank among the best in the SEC, even the country. They have fielded dynamic offensive players such as Derrick Henry and Odell Beckham Jr. But nothing reveals the true identify of a college football team like a game against a physical peer. When LSU and Alabama have gotten together over the last decade, the games have generally been grinding affairs, where yards and points are hard to come by.

Danielson traces the evolution of offense in the SEC back past 2011 to Urban Meyer's Florida teams that won national championships in 2006 and '08. Meyer brought the spread with him from Utah, stressing the perimeters of a defense.

"There were a little bit of question marks: Would that work against the elite NFL players in the SEC? And Urban proved he could do it," Danielson said. "Now, the reason LSU and Alabama didn't change was because they didn't have to change. They were winning the way they were."

Saban also pushed back against the fast-paced offenses, questioning whether they were creating a more dangerous game. He said in 2012: "I just think there's got to be some sense of fairness in terms of asking: Is this what we want football to be?"

He, like just about every defensive coach, questioned whether rules should be changed to decrease how far down field an offensive lineman could block on a passing play from 3 yards to 1. Why? Because the run-pass option was creating still more problems for defenders who were getting turned inside out trying to decide whether to drop into coverage or play the run.

The transformation to spread offense for Saban started with the hiring of Lane Kiffin as offensive coordinator in 2014.

It took LSU a little longer. Les Miles's replacement, Ed Orgeron, needed a couple of years, but in Burrow and first-year passing game coordinator Joe Brady, who was lured away from the New Orleans Saints, LSU now has an offense that can keep pace.

"I think that's the way the game is going now, and if you look at some of the most successful teams offensively they're pretty much all playing that way," Saban said. "It's much more difficult to make explosive plays just running the ball. These guys (LSU) just make a ton of explosive plays because of what they've evolved to."