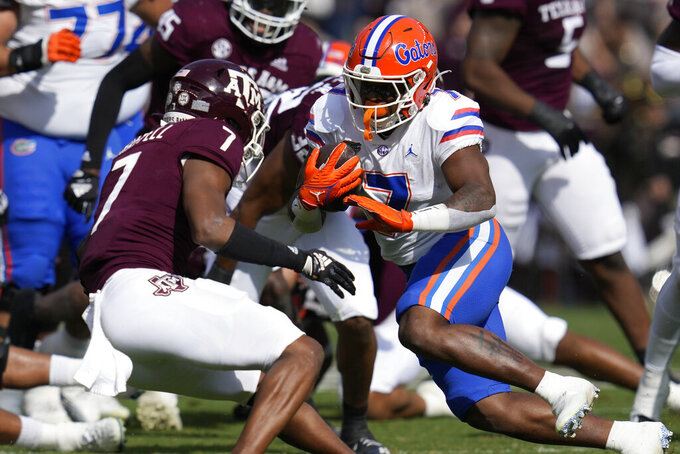 Florida running back Trevor Etienne (7) gets past Texas A&M defensive back Tyreek Chappell (7) during a run in the first quarter of an NCAA college football game Saturday, Nov. 5, 2022, in College Station, Texas. (AP Photo/Sam Craft)

COLLEGE STATION, Texas (AP) — Anthony Richardson threw for 201 yards and two touchdowns and rushed for 78 yards and two scores as Florida snapped its two-game losing streak with a 41-24 win over Texas A&M on Saturday.

Richardson had touchdown runs of 10 and 60 yards in the first quarter and connected with Ja’Quavion Fraziars and Caleb Douglas on touchdown passes of 19 and 12 yards, respectively, in the third quarter as the Gators (5-4, 2-4 Southeastern Conference) opened up a 34-24 lead.

“I told Anthony there late in the game ‘I think Anthony’s going to play this game for a long time,’” Florida coach Billy Napier said. “I think he will look back, and this will be one of those days that he will say was kind of a pivotal day. Playing with confidence. I thought he started fast. Really thorough in his prep during the week.”

Napier said he was proud of the Gators’ response in the second half, especially the defense which pitched a shutout over the final 30 minutes.

“I think we could have easily got frustrated with our defensive performance in the first half, but man, in that locker room you would never know,” Napier said. “It’s really a group that stuck together. They knew what the issues were. The ownership in each position group, being vocal about things they could do better. I think the staff did a terrific job making adjustments.”

Montrell Johnson Jr. rushed 22 times for 100 yards and a touchdown, Trevor Etienne rushed for 80 yards on 17 carries, and Ricky Pearsall had three catches for 65 yards as the Gators racked up 492 yards, including 291 rushing yards.

Devon Achane rushed for 122 yards and two touchdowns and caught another score for the Aggies (3-6, 1-5), who went into halftime up 24-20. Achane had rushing touchdowns of 5 and 2 yards and caught a 5-yard touchdown pass from Haynes King, who started in place of Conner Weigman.

King, who was making his fifth start of the season, finished 23 of 45 for 279 yards and a touchdown. Evan Stewart had eight catches for 120 yards, and Moose Muhammad III caught seven passes for 99 yards.

“They stymied us two or three times,” Texas A&M coach Jimbo Fisher said of the Aggies’ second half. “Even on the RPOs that we threw, they put the extra guy in the box, and we just didn’t get them blocked.”

Texas A&M lost its fifth straight, the longest losing streak for the Aggies since 1980.

“We’ll play hard and we’ll practice hard,” Fisher said. “We’ve been doing that. And like I say, play these last three games. … And the character of these guys, they’ll play. I know that. And we’ve just got to play. We’ve got to help them do a better job with them.”

Florida: The Gators, who need one more win to gain bowl eligibility, avoided their third straight season with a three-game losing streak with the victory. Florida was able to move the ball fairly easily on the Aggies throughout the game.

Texas A&M defensive back Jaylon Jones was ejected with 6:41 remaining in the first quarter after he was called for a targeting hit on Pearsall.

Florida: Hosts South Carolina next Saturday in its final home game of the season.

Texas A&M: Travels to Auburn for its final road game on Saturday.