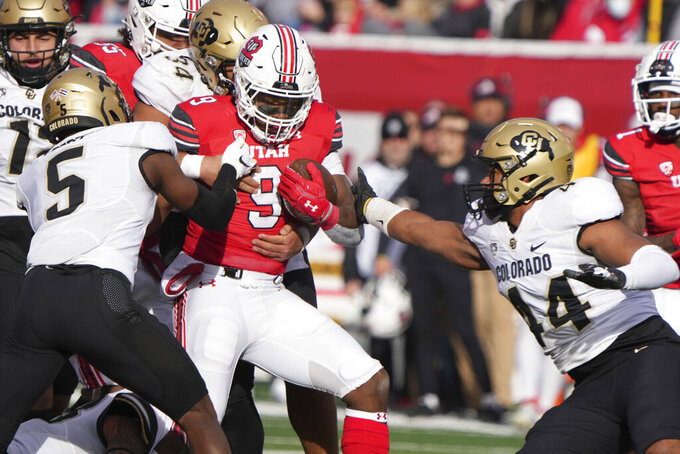 SALT LAKE CITY (AP) — Losing a couple of early season games was far from the most difficult thing Utah had to overcome to get back to the Pac-12 title game.

“We’ve taken probably the hardest thing that can happen and we’ve turned it into something beautiful,” receiver Britain Covey said after Senior Day victory against Colorado on Friday.

Cameron Rising threw three touchdown passes, Tavion Thomas ran for 142 yards and a score, and No. 16 Utah beat the Buffaloes 28-13.

Within the last year, the Utes lost star running back Ty Jordan and defensive back Aaron Lowe to tragic shooting deaths. Utah honored them with a TJ-AL logo on their helmets.

“There’s always been a reverence whenever we’ve talked about them, but we’re getting to the point now where we just celebrate them and honor what they represent. It’s more than two guys now, it’s the entire team, the whole university,” Covey said.

Utah Coach Kyle Whittingham said his team “didn’t have the look in our eyes that we had last week” and his players admitted it was difficult to focus since they already clinched the Pac-12 South. But they didn’t want to let their fallen teammates down. The Utes feel they are a team of destiny.

“I know they are out there with us,” said linebacker Devin Lloyd, who had nine tackles and a sack in what he said was his last home game before declaring for the NFL draft. “They are the reason why we have been as successful as we have been.”

Utah rallied from a 1-2 start to win eight of their last nine games on their way to their third Pac-12 championship appearance in four seasons.

“In this day and age, that is not easy to do. Great job by our defense … they were active, they flew around,” Whittingham said.

Rising scrambled and found Britain Covey on an improvised forward pitch for a 13-yard touchdown with 6:45 left in the third quarter to cap the scoring.

Thomas proved tough to tackle on any play, but especially when he powered through the first level and into the secondary to extend his school-record to 18 rushing touchdowns.

Colorado’s Brendon Lewis was harassed all game and finished with 84 yards passing, going 9-for-23, with four sacks.

The week after the Utes clinched the Pac-12 South against Oregon and ended the Ducks’ playoff hopes, Utah looked less than focused at the start against CU.

“It took a lot to focus on this game throughout the week because the whole off-season and entire season, we’ve been talking about the Pac-12 Championship,” Covey said.

Not long after Rising ran onto the field accompanied by Creedence Clearwater Revival’s “Bad Moon Rising,” he overthrew Brant Kuithe right into the hands of Colorado's Mark Perry. His 40-yard return set up a 33-yard field goal by Cole Becker for the Buffaloes’ first score of the day.

Becker hit a 56-yarder on the last play of the half.

The Buffaloes exploited the Utes’ weak link -- special teams -- with a blocked field goal in the first quarter and an electrifying 100-yard touchdown return by Nikko Reed to open the second half and cut the lead to 14-13.

Colorado never figured out a way to attack the stout Utah defense with only nine first downs, three three-and-outs and two turnovers on downs.

“Offensively we just struggled getting in rhythm to do anything positive. We had a couple nice drives … other than that we struggled with protection and we struggled creating any type of production in the run game,” Colorado coach Karl Dorrell said.

Eight Utah seniors were honored and joined by 10 juniors -- including Covey, Lloyd, lineman Nick Ford and Kuithe -- who may or may not return next season.

Utah won 700th game in school history, claimed its fifth straight win in the Colorado series and finished the season undefeated at home.

Colorado: The Buffaloes, who averaged 267 yards of total offense a game and ranked third from the bottom in the country, were opportunistic on special teams but it was another limp offensive performance.

Utah: The Utes again leaned on their running game and made crucial passes when needed. The defense made sure the result was never in doubt, despite poor special teams play.

Utah’s first two trips to the Pac-12 title game ended in disappointing losses and the Utes can’t wait to get another shot at the program's first Rose Bowl appearance.

“We’re not even going to celebrate this victory. The moment we get home, we’re just preparing,” Covey said.

Whittingham wishes he knew Pac-12 North’s winner, but will have to wait until the conclusion of tomorrow’s games.

“I’d go over the office right now and get started … but we’ll do some preliminary work on all three possible teams right way,” he said. “We can’t wait!”

Utah will play in the Pac-12 Championship game on December 3 in Las Vegas.