Run game could be key to Georgia's goal of boosting offense 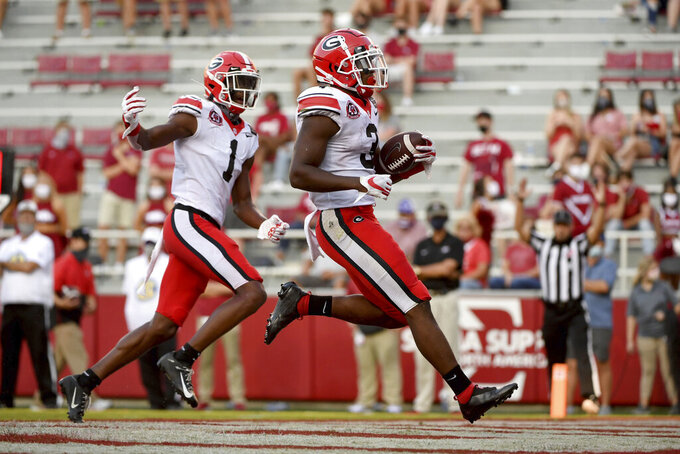 Georgia running back Zamir White (3) celebrates with teammate George Pickens (1) as he scores a touchdown against Arkansas during the second half of an NCAA college football game in Fayetteville, Ark., Saturday, Sept. 26, 2020. No. 5 Georgia has had an off week to prepare for Saturday's game at Kentucky after being shut out in the second half of a 41-24 loss to No. 2 Alabama. With Stetson Bennett expected to retain the starting job at quarterback, the Bulldogs are relying on their running game led by Zamir White to get the offense moving again.(AP Photo/Michael Woods)

Georgia is approaching the midpoint of its season seeking to regain its offensive momentum.

A strong running game may be the focus.

The No. 5 Bulldogs enter Saturday's game at Kentucky still looking to prove they can be consistently productive on the ground, as in recent years with such running backs as D'Andre Swift and Nick Chubb. They rank in the bottom half of the Southeastern Conference in rushing and passing with quarterback Stetson Bennett.

After being shut out in the second half of a 41-24 loss at No. 2 Alabama on Oct. 17, Georgia (3-1) used an off week to encourage competition at all positions, including at quarterback. Bennett continued to work with the first-team offense, but JT Daniels and D'Wan Mathis also took snaps with the starters.

“I’m excited about all of those guys,” coach Kirby Smart said Monday. "I thought they had great off-week work. They competed. Those guys continue to get better. We gave those guys a lot of reps during the off week.”

Smart gave no indication he was considering a change at quarterback. He said he is seeking stability instead of constant upheaval with first-year offensive coordinator Todd Monken.

“We are always evaluating guys at quarterback, and they are always trying to get better, grow their game,” Smart said, adding it is normal to encourage competition in an off week.

Georgia is hoping to gain momentum for next week’s game against No. 10 Florida.

Smart says he wants Georgia's offense to be balanced. There is balance, but not in a good way. The Bulldogs rank only eighth in rushing and ninth in passing in the Southeastern Conference. They rank fifth in the league with 33 points per game.

Bennett threw three interceptions and completed only 18 of 40 passes for 269 yards with two touchdowns against Alabama.

Zamir White ran for 57 yards with a touchdown against the Crimson Tide and is still seeking his first 100-yard game of the season.

“I feel the run game is there," White said. "There’s some stuff we've got to pick up, but that’s on all of us,” White said. "I think we'll be all right, though. Definitely with the offense, we just need to come together more and lock it in.”

Kendall Milton, Kenny McIntosh and James Cook have competed for carries behind White.

“We are fortunate we are able to play a lot of backs, so he doesn’t get probably as many carries, but that never seems to frustrate him,” said Smart of White.

This could be an important week for White and Georgia's running game against Kentucky (2-3).

John Fitzpatrick said he and other tight ends focused during the off week “on being stronger in the run game and being more efficient in our routes.”

Smart also said Georgia must continue to be a strong running team, even in a pass-happy era. He said the Bulldogs' success on play-action pass plays is dependent on the running game.

“If you are going to do those you have to be committed to the run,” Smart said.