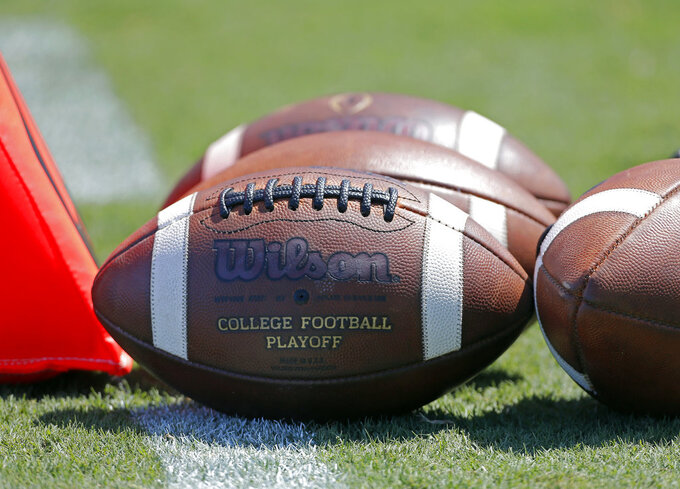 FILE - In this Sept. 2, 2017, file photo, footballs sit on the turf ready for kick-off before the start of an NCAA football game between South Carolina and North Carolina State in Charlotte, N.C. A study from The Institute for Diversity and Ethics (TIDES) finds that white men still “overwhelmingly” fill leadership positions at top-level college sports programs and conferences, leaving a “consistent underrepresentation of women and people of color” in those roles. (AP Photo/Bob Leverone, File)

A diversity study finds that white men still "overwhelmingly" fill leadership positions at top-level college sports programs and conferences, leaving a "consistent underrepresentation of women and people of color" in those roles.

The report card from The Institute for Diversity and Ethics in Sport (TIDES) at Central Florida finds only a slight improvement in racial and gender hiring for positions at Football Bowl Subdivision schools. The study examined positions that include university presidents or chancellors, athletic directors, faculty athletics representatives, conference commissioners and football coaching staffs.

The overall grade was a D after the study examined data from the start of the 2018-19 season, combining a C grade for racial hiring and an F in gender hiring.

"In our graduate program or any graduate program in the country — or even in an undergraduate program — a student with those grades wouldn't be in school any longer," said Richard Lapchick, the institute's director and the lead report author. "They would be tossed out of the school on probation or even suspended. It just underlines the unacceptability of these numbers."

The study found that 337 of 395 leadership positions in the study (about 85 percent) were held by whites, a slight decrease from 86.6 percent reported in the 2017 study. And white men predominantly held those positions, making up 73 percent of college presidents or chancellors and nearly 77 percent of athletic directors at 130 FBS schools.

By comparison, there are 22 women working as presidents or chancellors (about 17 percent), with only five of those being women of color, according to the study. There are 12 women working as FBS athletics directors, and all but two — UNLV's Desiree Reed-Francois and Virginia's Carla Williams — from that small group are white.

Still, Lapchick said, the hiring of three women as athletic directors and another as an interim AD in the past year offered "the only encouraging news in this particular report" — which he called "a lot of bad news."

"Progress has been glacial," he said.

The number of head football coaches of color remained similar to last year, going from 17 to 18. White men made up 62.5 percent of assistant football coach positions for a sport in which 54.2 percent of the players are black.

Lapchick supports the creation of what he calls the Eddie Robinson Rule — named after the late longtime Grambling coach — that would follow the lead of the NFL's Rooney Rule requiring teams to interview a diverse group of candidates for open positions.

"For me the factor that really could start to bring about change is athletes becoming outspoken," Lapchick said.

"I think we're going to start to see student-athletes at the college level, as well as professional athletes, saying: why aren't there more head coaches or athletic directors who are African-American or Latino or Asian-American or whatever the case may be — why don't they look more like those of us that are on the playing field? I think their voice is going to become a potentially powerful voice."