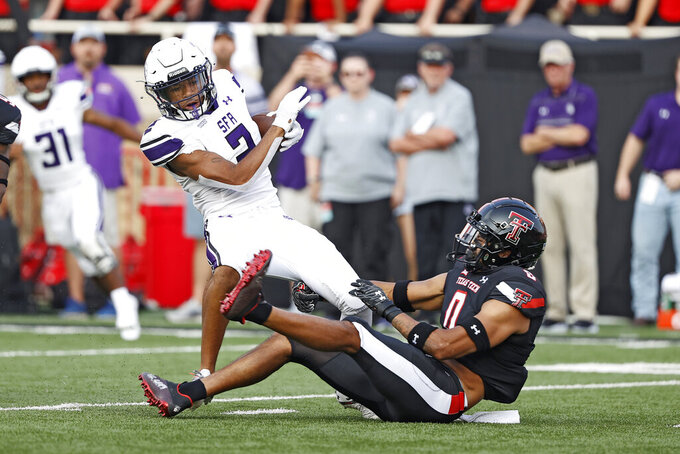 LUBBOCK, Texas (AP) — Tahj Brooks ran for two touchdowns in the third quarter, including a 67-yarder for the lead, and Texas Tech held on to beat lower-division Stephen F. Austin 28-22 on Saturday night.

The Red Raiders (2-0) made a stand in the final two minutes, forcing a turnover on downs after the FCS Lumberjacks had a first down inside the Texas Tech 10-yard line. Trae Self's fourth-down pass into the end zone was incomplete.

Texas Tech defensive tackle Jaylon Hutchings came up huge with a tackle for loss and a sack on consecutive plays before a QB pressure of Self on the final play for SFA (1-1).

After Brooks' long scoring run, Xavier White broke free for 52 yards on a 97-yard drive that ended with a short TD run.

“It wasn’t clean on offense, and I’ll take the blame on that,” Texas Tech coach Matt Wells said. “In a game where we didn’t play real crisp on offense, we fought at the end. We popped a couple of runs in the third quarter where we fit it up well.”

Leading 21-13, Texas Tech went for it on fourth down on the final play of the third quarter, and Tyler Shough fumbled on a sack. The ball ended up 39 yards behind the line of scrimmage, and SFA scored but couldn't convert the 2-point try, settling for a 21-19 deficit.

The Red Raiders pushed their lead to 28-19 on a White’s 4-yard touchdown run, which was set up by Erik Ezukanma's 55-yard catch-and-run on third-and-8.

Ezukanma got Texas Tech off to a quick start when he turned a first-down catch into a 75-yard touchdown three snaps into the game. He finished with six catches for 144 yards, while Brooks had 115 yards on 11 carries.

The Lumberjacks led 13-7 at halftime, keyed by Willie Roberts' 18-yard interception return for a touchdown. Self finished with 343 yards passing. Xavier Gipson hauled in 13 passes for 158 yards.

Stephen F. Austin: Coach Colby Carthel probably has his best building block even though it was a loss. He's in his third season of trying to make the Lumberjacks FCS contenders after winning a national championship at Division II Texas A&M-Commerce.

Texas Tech: It was quite a familiar feeling at the end for the Red Raiders. In their home opener last year, they had to stop a 2-point conversion late in the fourth quarter for a 35-33 victory over another FCS team, Houston Baptist.

Carthel had his share of support in the crowd. He was born in nearby Floydada and grew up in Friona, 100 miles northwest of Lubbock. His high school coach was James Morton, whose son Behren is a freshman quarterback for the Red Raiders.

Texas Tech gave the ball away four times in the win (two interceptions, two fumbles) and did not come up with a takeaway. That was the opposite of the Red Raiders’ season-opening win against Houston when they nabbed four interceptions, their most in a game since 2008.

Texas Tech: The final non-conference game is at home against Florida International next Saturday.