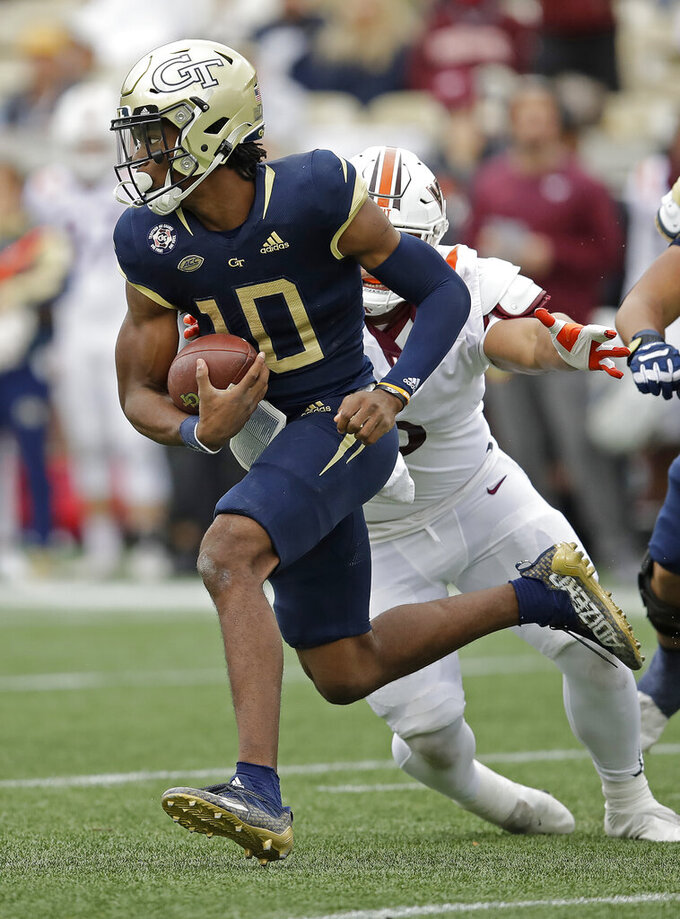 ATLANTA (AP) — It was easy to pick out a player of the game with Tre Turner catching seven passes for 187 yards and a touchdown to lead Virginia Tech to a 26-17 win at Georgia Tech Saturday.

Virginia Tech snapped a three-game losing to break even in the ACC on the strength of four field goals by John Parker Romo, Turner’s dazzling day, a big fourth-down stop with the Hokies’ backs nearly to their own goal line and a smash-mouth game plan.

The Hokies rushed 53 times for 237 yards, and as Georgia Tech geared to stop the run in the first half, Virginia Tech kept throwing the ball over the heads of the Yellow Jackets on the way to a 20-7 halftime lead.

Braxton Burmeister completed 15 of 25 passes, 254 yards and two touchdowns for Virginia Tech, and Turner racked up a career high in receiving yards. The Hokies gained 199 of those passing yards in the first half.

Thomas had rushed for 103 yards, Raheem Blackshear for 83, and Burmeister for another 46 even after losing 19 on sacks.

“It starts with running the football. We made some plays in the passing game as a byproduct of (Georgia Tech) selling out to stop the run,” said Fuente. “Malachi certainly played well. Raheem’s playing better because Malachi’s playing better. You see a concerted effort to move piles and go north and south.”

Georgia Tech (3-5, 2-4 ACC) toyed with a comeback in the second half, but couldn’t overcome a first half in which the Yellow Jackets allowed Virginia Tech (4-4, 2-2) – the next-to-last ranked offense in the conference at 329.7 yards per game – to match that yardage on the way to a 20-7 lead.

Virginia Tech took the lead on their second possession when Turner was open along the left sideline 10 yards past the nearest Georgia Tech defender. Only because Burmeister underthrew the ball did the wide receiver not waltz into the end zone as he finished a 69-yard scoring play by juking two defenders.

“We had a couple busts in the first half,” said Tech coach Geoff Collins, who suggested that a player injury played a factor in personnel on the field at the time.”

Georgia Tech running back Jahmyr Gibbs rushed for 113 yards, and nearly gave the Yellow Jackets the lead late only to slip on wet turf in Bobby Dodd Stadium.

After Georgia Tech pulled to within 23-17, Gibbs broke through a gaping hole over right tackle early in the fourth quarter for what looked like possible 81-yard touchdown run.

He had one last defender to worry about. “I saw a safety coming at an angle,” he said. “I tried to cut back. I rolled my foot.”

Gibbs slipped at the Virginia Tech 20, but said, “Nah,” when asked if the turf was slick on a cool, gray day with intermittent drizzle.

A few plays later, Collins opted to go for it on fourth-and-1 from the Virginia Tech 12.

Jeff Sims completed 15-of-26 passes for 183 yards and two scores and rushed for 60 yards. Sims had a touchdown pass to Gibbs called back by a penalty, and completions of 39 and 19 yards were canceled as well. He was responsible for both Georgia Tech turnovers, each in the second half, with a fumble and an interception.

Georgia Tech largely scrapped its base defensive look at halftime, “As the game they went on, they went back to more four down (linemen),” Fuente said. “We were able to run the ball, and the line was going the right direction.”

Virginia Tech: The Hokies carried play from start to finish in building a 23-16 edge in first downs while holding the ball for more than 10 minutes longer than the Jackets.

Georgia Tech is at Miami on Saturday.