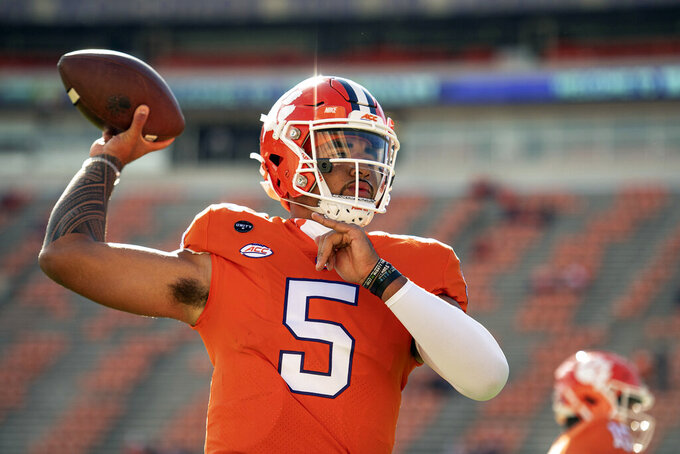 FILE - In this Oct. 31, 2020, file photo, Clemson quarterback D.J. Uiagalelei (5) warms up before an NCAA college football game against Boston College in Clemson, S.C. Uiagalelei finally has the national spotlight to himself. Uiagalelei and the No. 3 Tigers meet the fifth-ranked Bulldogs Saturday night in the Duke’s Mayo Classic, a neutral site game in Charlotte, N.C. (Josh Morgan/Pool Photo via AP, File)

No team has lost its opening game and reached the Bowl Championship Series title game or the College Football Playoff.

Something to keep in mind when watching No. 3 Clemson play No. 5 Georgia in the biggest game of the opening weekend of the season.

Tigers-Bulldogs is one of five games matching teams in the AP Top 25 on Saturday, the centerpiece of a long Labor Day weekend of college football.

The Big Ten decided to embrace early season conference games this year like never before, and the result is two ranked matchups (No. 17 Indiana at No. 18 Indiana and No. 19 Penn State at No. 12 Wisconsin) plus both of last season's division winners (No. 4 Ohio State and Northwestern) opening up.

There are also a plethora of intriguing games with neither team ranked such as Texas Tech vs. Houston, West Virginia at Maryland and Louisville-Mississippi on Monday night.

New starting quarterbacks will debut at powerhouse programs such as No. 1 Alabama, Ohio State, No. 6 Texas A&M and No. 9 Notre Dame.

Sometimes the game with the highest-ranked teams is not the best game. This is not one of those times.

Bulldogs coach Kirby Smart has been stacking top-three recruiting classes in recent years to keep up with Alabama — but Georgia hasn't had Tide-level success.

Is this the season for a breakthrough, with USC transfer JT Daniels now healthy and established at quarterback?

Realistically, the 60th meeting between the schools — first since 2008 — should not be a CFP elimination game, but history suggests the loser is in a bind.

The Crimson Tide unleash him against No. 14 Miami in Atlanta. Despite the inexperience, Young is already one of the betting favorites to win the Heisman Trophy, according to FanDuel.

Exploding out of the gate with a big game against a ranked opponent would quickly help validate the hype around a player that gets compared to Heisman Trophy winner and Arizona Cardinals quarterback Kyler Murray.

13 -- Consecutive games in which Wisconsin's defense has forced at least one turnover, the longest streak in the Big Ten. Penn State's Sean Clifford tied for the Big Ten lead with nine interceptions throw last season.

21-4 —- Combined record the last two seasons for No. 23 Louisiana-Lafayette, which opens at No. 21 Texas. It's the first game for new Longhorns coach Steve Sarkisian and it comes against a team that beat a ranked Big 12 school (Iowa State) last year.

34-1-1 — No. 15 Southern California's record against current members of the Mountain West. The Trojans open Saturday against defending Mountain West champion San Jose State, which is 0-4 against USC.

376 — Nebraska’s sellout streak after a donor bought up the remaining tickets for the Cornhuskers’ game Saturday against Fordham, an FCS school from New York. The streak dates to 1962, but if the Huskers continue to struggle — they opened the season with a loss at Illinois in Week 0 — Nebraska might have to continue to rely on the generosity of boosters to keep its record streak rolling.

With so many good games, it will be hard to catch everything this weekend. And it's easy to brush past the FCS-FBS matchups because so rarely does the FCS squad pull the upset.

There are a few ranked teams in FCS, Division I's lower tier of college football, facing ranked major college teams that could inject some unexpected drama into the weekend.

Montana, the ninth ranked team in FCS, faces No. 20 Washington of the Pac-12.

No. 7 Iowa State faces Northern Iowa, which comes in ranked 21st in FCS.

Couple of other potentially tricky spots for FBS teams against FCS: Missouri State is at Oklahoma State, Eastern Washington goes to UNLV and Monmouth plays at Middle Tennessee.

Can opening weekend be a must-win? No, not really.

However, after taking a pay cut after last year's losing season, it would certainly help Michigan coach Jim Harbaugh to take care of business in a drama-free way against Mid-American Conference contender Wester Michigan at the Big House.