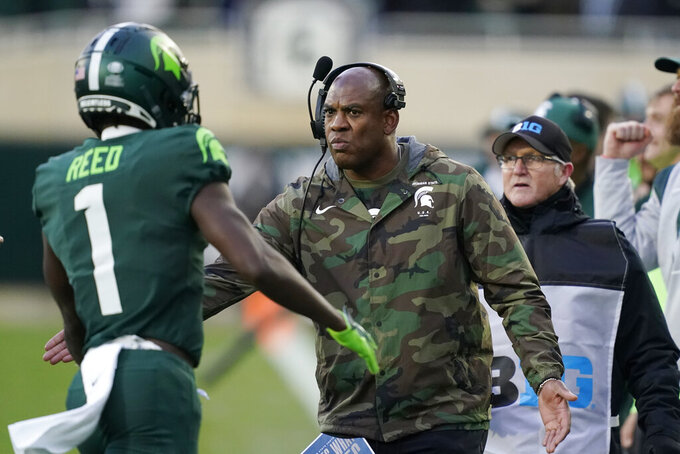 With two weeks left in the regular season, top-ranked Georgia is the only Power Five team to have clinched a spot in its conference championship game.

More tickets to title games should be punched this weekend.

What's certain is the Big Ten and Big 12 won't be decided until next week.

No. 7 Michigan State at No. 5 Ohio State

Michigan State (9-1, 6-1, No. 7 CFP) can take control of the Big Ten East race with a win at the Horseshoe. That would give the Spartans head-to-head tiebreakers against Michigan and Ohio State.

It's a tight race among Stroud, Alabama's Bryce Young, Michigan State's Kenneth Walker III and Mississippi's Matt Coral, and voters would be wise to wait until after the conference championship games to turn in their ballots.

Of the four, Stroud has the best remaining regular-season games with top-10 opponents in Michigan State and Michigan.

Stroud created some momentum with his 361 yards passing and five touchdowns against Purdue last week, and he has a chance to put up more big numbers against a Michigan State defense that's given up 350 yards or more through the air in each of its last three games.

8 — Nation-leading number of Northern Illinois games decided by one score.

Yes, it's a matchup of .500 teams. But it also is a snapshot of the state of college football with decisions on coaches coming fast and furious.

The Hokies announced Tuesday they would move on without Fuente, and Hurricanes coach Manny Diaz is in limbo following the Monday firing of athletic director Blake James.

Defensive line coach J.C. Price will serve as Virginia Tech's interim coach for the last two regular-season games. Diaz is set to coach Miami's next two games before his future is announced.

That loss to lowly Kansas didn't sit well in Austin, and neither does the Longhorns' current five-game losing streak. The noise got so loud that athletic director Chris Del Conte was moved to issue a statement of support for Sarkisian on Tuesday.

Texas just paid $24 million to buy out Tom Herman and his assistants last year, and it would cost $42 million right now if the Longhorns called it quits with Sarkisian and his staff.

Not to say money is no object, but Texas isn't a place known for patience, and Sark's seat will be on fire if he doesn't win out and get to a bowl.