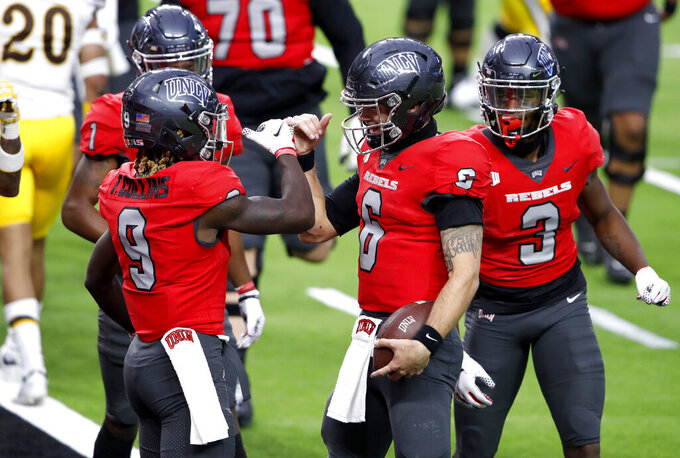 UNLV quarterback Max Gilliam, center, celebrates with teammates after scoring a touchdown against Wyoming during the first half of an NCAA college football game in Las Vegas on Friday, Nov. 27, 2020. (Steve Marcus/Las Vegas Sun via AP)

LAS VEGAS (AP) — Lee Williams had three short touchdown runs, Trey Smith rushed for a career-high 164 yards with a touchdown and Wyoming rolled up 399 yards on the ground to breeze past winless UNLV 45-14 on Friday night.

Xazavian Valladay kicked off the Cowboys rushing attack on the second play of the game, bursting through a gap up the middle and sprinting 78 yards untouched to score. Valladay finished with 94 yards rushing.

Smith broke off the biggest game of his five-season career at Wyoming, surpassing 100 yards early in the third quarter and squeezing past a would-be tackler to score on a 28-yard run.

Quarterbacks Max Gillam and Doug Brumfield scored keepers for UNLV, late in each half.

UNLV was held to 290 yards of offense with six punts, an interception and a fumble. The turnovers resulted in 14 Wyoming points. Junior linebacker Chad Muma had three sacks for the Cowboys.

Williams passed for 99 yards and rushed for another 43 with three TDs.

It was a rare blowout in this series as Wyoming and UNLV have battled through four overtime contests in Las Vegas, including a 69-66 three-OT slugfest in 2016 that remains the highest scoring game in the Mountain West Conference (No. 5 in FBS).