In Year 2 of pandemic, Boston College won't let guard down 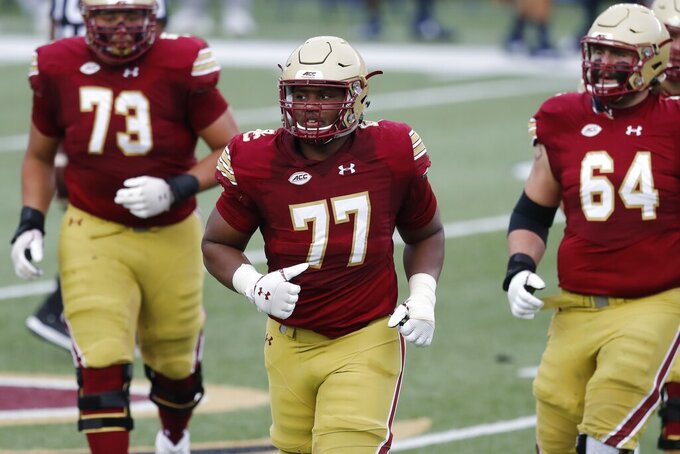 BOSTON (AP) — So far, Boston College has navigated COVID-19 as well as any football team in the country. As the Eagles head into the second season of the pandemic, they promise not to relax.

“Whatever we have to do to play, we’re going to do,” center Alex Lindstrom said at the team’s media day Monday.

“Nobody’s more important than the team. So they’re not going to go out to a bar and sacrifice getting something like COVID and come back and give it to somebody so we have to forfeit the game,” he said. “So, no, I don’t see that happening.”

In its first season under coach Jeff Hafley, BC stood out for its success in managing the coronavirus outbreak, making it to the final week before its only case: a player who went home for Thanksgiving and tested positive on his return.

The Eagles (6-5, 5-5 Atlantic Coast Conference) played all 11 scheduled games, with just one of them postponed just one day — and that was because of shuffling elsewhere in the ACC.

“We were one of the few teams, I believe, that had a good run of not testing positive,” defensive line coach Vince Oghobaase said. “So I think they understand the seriousness of the virus, and they understand if one guy does catch it or happens to pop that it can affect the unit if they contact trace.

“They take it seriously, especially with our experience last year,” he said. "Nobody wants to do that again.”

This year, 100% of the team has been vaccinated; one player transferred out rather than get the shot. And though the mask and social distancing restrictions have been scaled back, the risk is heightened in one way: If an outbreak prevents a team from taking the field, the game will be forfeited, not rescheduled.

“The stakes are raised,” defensive lineman Marcus Valdez said. “The risk of exposure is not as big as it was last year when we were unvaccinated. But the threat is still there. So we’re trying to definitely stay safe, and just trying to be conscious and smart.”

Players and coaches credit the success to Hafley, who joined BC in December 2019, just before the pandemic began. He spent much of his first year in Chestnut Hill unable to do the hands-on coaching he prefers, but the message still got through.

Instead of gathering his players in the meeting room, they would spread out in the field house. Positional coaches weren’t able to demonstrate technique without shouting it from six feet away. Talking in meetings was an endless series of muting and unmuting.

Hafley and his staff said they were glad to get back to something closer to normal this season.

"It's still kind of weird for me,” Hafley said. “But it’s nice to look at the guys in the eye like this and be able to coach them and sit next to them in the meeting room and have them in my office. So from that regard, it’s awesome.”

Linebackers coach Sean Duggan said he was glad to have his players over for dinner for informal gatherings; coaches can talk to players when they bump into each other in the hallways, without having to set up a Zoom meeting.

Entire units are back in practice together, instead of keeping players away to avoid sending the whole unit into isolation with a positive test.

“It is so rewarding,” Oghobaase said. “You lose sight of how real football is truly played, practiced, repped, taught. Last year, with COVID, we had to do so many things that were so unnatural to the game.”