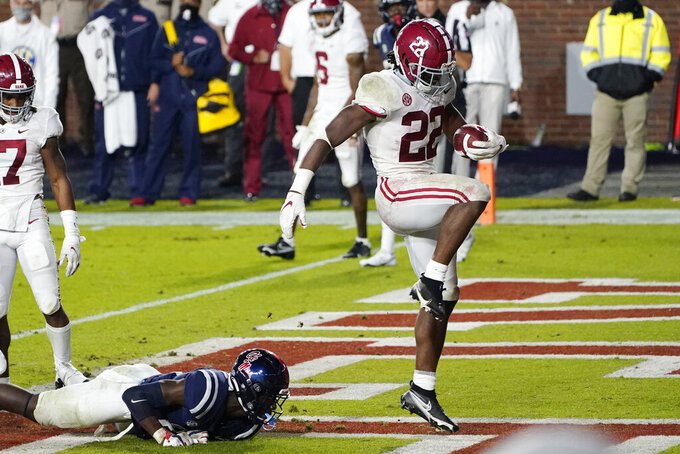 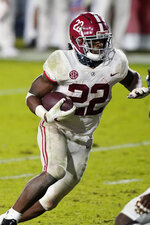 Najee Harris was front and center for Alabama leading up to the season.

The second-ranked Crimson Tide's standout tailback participated in college players' “We Want to Play” movement, spoke at a team march for social justice and was the subject of a YouTube series entitled “The Campaign.”

Harris took center stage again with a big game in a 63-48 win over Mississippi, running for 206 yards and a school record-tying five touchdowns. That performance was just in time for Saturday's showdown with No. 3 Georgia's defense, which is allowing a nation's best 38.3 rushing yards a game and hasn't given up a touchdown on the ground through three games.

“They have an amazing defense, one of the best in the nation, and that motivates me more,” Harris said Monday.

Alabama’s passing game was the big star of the first two games, when Harris averaged a modest 4.9 yards on 29 carries. He scored five touchdowns but didn’t have a run longer than 18 yards.

The headlines focused on quarterback Mac Jones and receivers Jaylen Waddle and John Metchie III. Then it was Harris's turn.

He carried 23 times against a struggling Rebels defense and caught three passes for 42 yards. Held in check the first two games, Harris scored on runs of 33, 5, 3 and 16 yards before a game-sealing 39-yarder with just over a minute left.

His 10 rushing touchdowns through three games is the most in the SEC in at least 15 seasons, according to Alabama.

Harris just happens to play on one of the best passing offenses in the country.

He was likely to be one of the top running backs selected in the NFL draft after last season but opted to return as a senior. After two seasons waiting his turn behind Damien Harris and eventual first-round NFL draft pick Josh Jacobs, the once-prized recruit had emerged as a star when he finally got his chance.

“He’s a tremendous back,” Georgia cornerback Eric Stokes said. "He’s a hard runner and especially he’s getting way better with his catching ability. That makes him a bigger threat, even outside of that.

"You know he’s a hard runner and you know you’ve got to bring him down.”

Off the field, when the season was in jeopardy because of the COVID-19 pandemic, Harris joined a group of players pushing for games to be played. “We want our voices to be heard and what we are saying is we want to play football this fall!” Harris posted on Twitter on Aug. 10.

He also took a prominent role in organizing and speaking in the team and athletic department's march in early September after recent incidents of police brutalit y against Black men and women.

Harris also was the subject of a YouTube series called “The Campaign” with several episodes airing on YouTube starting in September. It featured some of his training sessions and workouts but he also led a video tour of Alabama’s football building, stopping at the Heisman Trophy display for ex-Tide running backs Derrick Henry and Mark Ingram.

He said it wasn't about campaigning for the Heisman.

“The Heisman thing, it was just something like a hobby I guess during quarantine,” he said last month. “I wasn’t really focused on it.”

If Harris does emerge as a legitimate candidate late in the season, the Ole Miss performance certainly won't hurt his case. The one blemish: His first career lost fumble after 466 previous touches without one.

His teammates didn't need convincing of his abilities as a tailback.

Tide linebacker Christian Harris says after facing him in practice and seeing him in games Najee Harris "in my eyes is the best running back in college football most definitely.”

“It doesn’t necessarily surprise you, it’s just more like ‘Wow, this dude is different,’” Christian Harris said. "We’ve seen half the stuff he does before every day in practice so I guess we don’t have the same reaction as everybody else may have but it’s pretty crazy honestly. Like, watching it every day, it’s amazing.”