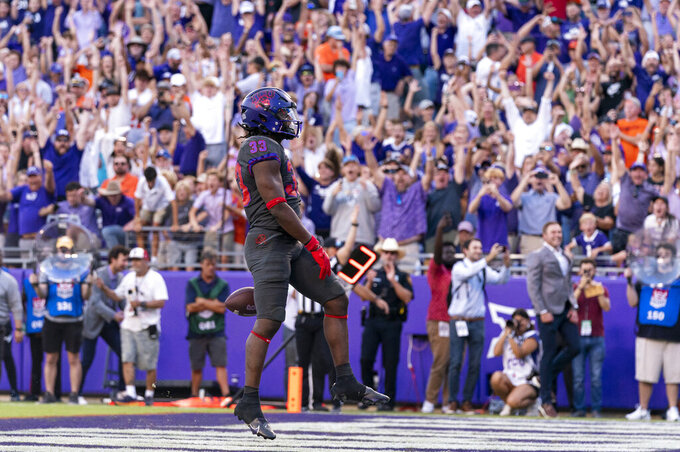 October reveals the truth about a college football season.

A Saturday that featured six games matching ranked teams, including three battles of unbeatens, promised to set the tone for the second half and sort contenders from pretenders.

No. 5 Michigan stepped forward emphatically in the Big Ten. No. 13 TCU made an improbable rally to become the Big 12 favorite. In the Pac-12, No. 20 Utah showed its not ready to give up its crown.

And No. 6 Tennessee put the Southeastern Conference on tilt.

Hendon Hooker and the Volunteers played the game of the day, and maybe the season, beating No. 3 Alabama for the first time since 2006 with a walk-off field goal.

“This is college football at its absolute best,” Vols coach Josh Heupel said.

No doubt about it.

For those who spend their Saturdays in front of multiple screens, there was about a 30-minute period when Alabama and Tennessee were trading haymakers and TCU was erasing a 14-point deficit against No. 8 Oklahoma State.

As great as Max Duggan, Quinten Johnston and the Horned Frogs were in taking one away that the Cowboys seemed to have in control, the Vols were the headliners.

The storyline of this season — or so we thought — was three elite teams, Alabama, Georgia and Ohio State, with the rest of the country playing catchup.

Alabama hasn't lived up to the billing.

Heisman Trophy winner Bryce Young and the Tide started No. 1, then barely escaped Texas in Week 2. OK, it happens.

Then Young injured his shoulder against Arkansas and had to sit out last week's game against Texas A&M. The Tide were a mess of turnovers and missed field goals and again barely escaped.

Surely, things would be different with Young.

Well, he was typically magical against Tennessee, but Alabama couldn't cover Jalin Hyatt (five touchdowns), couldn't stop committing penalties (17 for 130) and botched the last minute of the game when a potential winning kick was in sight.

“We did too many things to help them,” Tide coach Nick Saban said.

Saban and the Tide have plenty to lament, but having a first down at the Tennessee 32 with 34 seconds left and ending up with a 50-yard field goal sailing wide with 15 seconds left for the Vols turned out to be a disaster.

Tennessee still has to play at No. 1 Georgia on Nov. 5. Alabama has plenty of work left to do to win another SEC West title, including a trip to unbeaten No. 9 Mississippi.

But the Vols blew away the idea of the two SEC titans marching unimpeded toward another championship showdown in Atlanta.

Now they're CFP contenders and Hooker is the Heisman frontrunner.

Earlier in the day, Michigan officially put No. 2 Ohio State on notice.

The Wolverines beat the Buckeyes last year to end its long drought in the rivalry on the way to a Big Ten title and playoff berth.

The Wolverines have lived in the top-five for weeks this season, but with some skepticism after starting against the weakest nonconference schedule in the country and no ranked Big Ten teams.

Against No. 10 Penn State, Michigan looked like a real threat to the Buckeyes again.

Only a couple of long plays by the Nittany Lions and some stalled red zone trips in the first half kept the game respectable. Running back don't win the Heisman Trophy anymore, but Blake Corum is Michigan's man in that conversation.

“The offensive line knows that if they give Blake and Donovan (Edwards) space, any kind of crack, they’re going to make the most of it,” coach Jim Harbaugh said.

Last year he was the lightning to Hassan Haskins' thunder for Michigan. Corum is a workhorse now. He came into the game seventh in the nation in rushing at 122.5 yards per game and then went for 166 on 28 carries with two touchdowns against Penn State.

And to cap off a wild day, Utah knocked No. 6 Southern California from the ranks of the unbeaten.

A generous defense finally caught up to the Trojans, who also lost star receiver Jordan Addison to a leg injury that looked worrisome.

The Utes relinquished Pac-12 favorite and playoff contender status last week at UCLA, but on a night they honored two fallen teammates they played inspired and coach Kyle Whittingham made the smart call with a late 2-point conversion.

Like the Tennessee fans, Utah's stormed field — though they didn't make off with the Rice-Eccles' goal posts.

The ones at Neyland Stadium, at least one upright, ended up in the Tennessee River.

Next week's battle of unbeatens is in the Atlantic Coast Conference with No. 4 Clemson, which had its hands full with Florida State, and surprising No. 18 Syracuse meeting in Death Valley. The Orange are 6-0 for the first time since 1987. ... Marshall and Stanford are 2-0 against Notre Dame and 0-7 against other FBS teams. The Cardinal broke an 11-game losing streak against FBS opponents by handing the Fighting Irish their third loss. ... There are no undefeated Group of Five teams left after two Sun Belt upsets. No. 25 James Madison lost at Georgia Southern and Coastal Carolina was smoked at home on Old Dominion ... There are also no more winless teams in FBS. Colorado beat Cal in overtime to win the first game under interim coach Mike Sanford, with one of the craziest pass breakups you’ll ever see. ... Miami and Oklahoma both snapped three-game losing streaks for their first-year coaches. The Sooners got QB Dillon Gabriel back from injury and it fixed their offense as they handed No. 19 Kansas a second straight loss. Coach Brent Venables' defense is still a problem, but the Sooners could still be an issue in the Big 12. The Hurricanes held on at Virginia Tech, getting quarterback Tyler Van Dyke on track for what they hope will be redeeming stretch run for coach Mario Cristobal ... No. 22 Texas snapped a three-game losing streak to Iowa State and handed the Cyclones a fourth straight one-possession loss. Iowa State is 0-4 in the Big 12 by a combined margin of 14 points. ... No. 24 Illinois has already banked victories against Iowa, Wisconsin and Minnesota and is in great shape to win the Big Ten West in Bret Bielema's second season. Illini star Chase Brown became the first 1,000-yard rusher in the country this season against the Gophers. Circle Nov. 12 when Purdue travels tp Champaign, Illinois, in a game that could decide a trip to the Big Ten title game — just as we all expected.