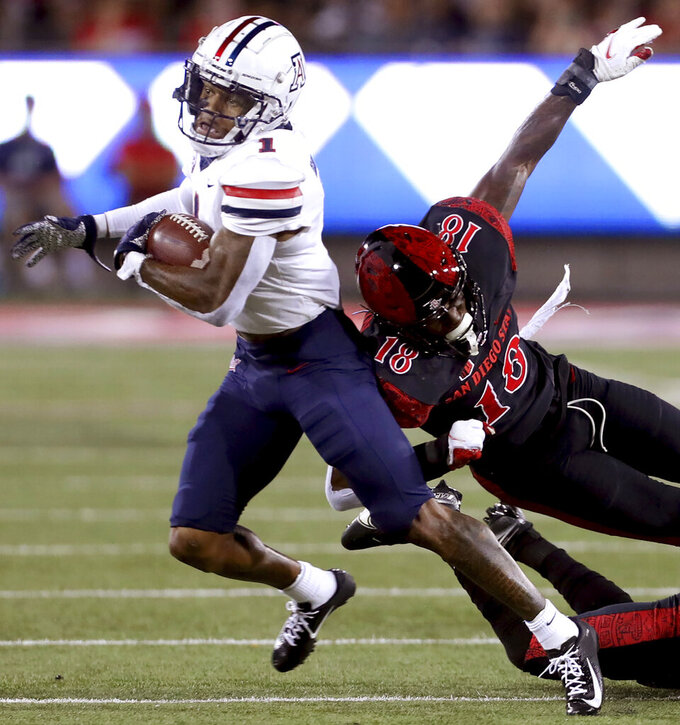 Arizona receiver Stanley Berryhill III bounces off San Diego State safety Trenton Thompson (18) after his catch and heads for the end zone for a touchdown during the first half of an NCAA college football game Saturday, Sept. 11, 2021, in Tucson, Ariz. (Kelly Presnell/Arizona Daily Star via AP)

TUCSON, Ariz. (AP) — Arizona entered the season with a new coach and hopes of ending a school-record losing streak.

The Wildcats came up just short in an opening loss to BYU and took a step backward in a home loss to San Diego State last weekend, stretching the losing streak to 14 games.

The next shot to end the streak appears to be the best one: Saturday against Northern Arizona.

Beating a winless FCS program would normally not be a big deal for a Power Five school, but the Wildcats will take any win they can get.

“I can’t wait to get our first victory and get that cloud lifted, and then from that point on go ahead and just play ball," Arizona coach Jedd Fisch said. “I know that that’s what we’re going to do.”

Fisch renewed hope in the desert after being hired last year, but the results on the field have yet to change.

Arizona (0-2) got off to a sluggish start against BYU before a late rally came up just short in a 24-16 loss, then struggled in nearly every phase of a 38-14 home loss to San Diego State.

Disappointed, the Wildcats had a week to sort things out before hosting the Lumberjacks.

"There were a lot of things that went wrong on Saturday night,” Fisch said. “I was very disappointed that we couldn’t get things going. I hold myself very much accountable for all the defeats and make sure that the players get the accolades for the victories, as they should.”

The numbers are in Arizona's favor to end the losing streak against NAU (0-2).

The Wildcats have not lost to an FCS opponent since 2002, a span of 15 games, and have won 14 straight against the Lumberjacks, scoring an average of 68 points the past three.

Northern Arizona has gotten off to a rough start to its third season under coach Chris Ball.

Coming off a pandemic-delayed spring season, the Lumberjacks opened the season with a 42-16 loss to Sam Houston State and lost 34-7 at South Dakota last week.

Northern Arizona is allowing 470 yards of offense per game, including 221.5 rushing, and quarterback Jeff Widener has thrown four interceptions to offset 476 yards passing.

It certainly won't get any easier Saturday night against a team that's bigger and faster at nearly every position.

“When we put a game plan together, it’s got to be simple and we’ve got to be able to handle the swings of the game," Ball said. "We just are still not handling the swings and physicality of the game right now.”

Fisch is making a change at quarterback for Saturday's game, going with Will Plummer after Gunner Cruz started the first two games.

Arizona punter Kyle Ostendorp has a Pac-12 high seven punts of at least 50 yards and is averaging 45.8 yards on 16 punts. ... Northern Arizona's Carson Taylor has 14 career sacks, fifth on the school's all-time list. ... Arizona WR Stanley Berryhill III has 17 receptions for 169 yards through two games. ... Lumberjacks WR Stacy Chukwumezie is 14th in the FCS with an average of 103.5 yards receiving per game.