Bazelak composure helping him settle in as Hoosiers new QB 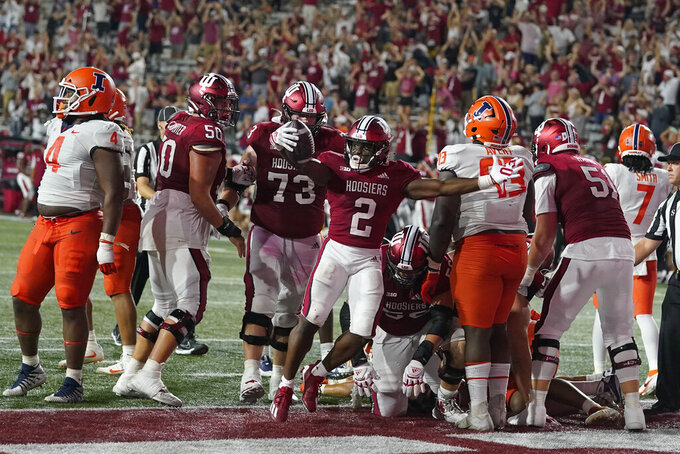 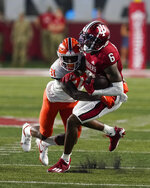 BLOOMINGTON, Ind. (AP) — Connor Bazelak stood at the microphone last weekend, every bit as composed following his first win as Indiana's new quarterback as he was during the decisive final drive.

And his spectacular Friday night finish convinced others that Bazelak can win games, too. Now, just one game into a new chapter in his career, many Indiana fans and teammates expect bigger and better results from the former Ohio prep star.

“Honestly, that was the first time I’ve seen Connor talk for real," said Cam Camper, who had two catches on the final series and finished with a school-record 156 yards receiving in a Hoosiers debut. "It was good to see him keeping us positive after certain plays, telling us it was good and we would get another one. The game kind of brought out Connor being a leader.”

He was 7 of 9 for 80 yards in his first career start, which ended with a torn anterior cruciate ligament in 2019. He returned the next season and was chosen the SEC's co-freshman of the year after topping the 300-yard mark three times, beating LSU and going 5-3 as the starter. Then last year, Bazelak threw 16 TD passes, 11 interceptions and didn't play in Missouri's bowl game, prompting him to search for a new school.

What he found at Indiana was that his quiet demeanor coupled with Allen's excitable personality was a perfect match.

“The things that showed up on Friday night, to me, those things were probably big factors (in the decision),” Allen said. "The poise that he shows in that moment when you have to just kind of have ice in your veins and just go make plays. Even though it was a tough decision, that was the decision and, obviously, he came up big for us and I wasn’t surprised.”

At least Bazelak succeeded in Week 1 — something that didn't happen last year when the Hoosiers were routed at Iowa. A spate of injuries ensued and the season quickly unraveled.

Bazelak, meanwhile, now has three more weeks to fine-tune his timing with his new team and he's already off to a good start.

He went 28 of 52 for 330 yards and one touchdown with one interception, becoming the first Hoosiers quarterback to top the 300-yard mark in his starting debut since Antwaan Randle-El in 1998.

Plus, he led the masterful 12-play, 75-yard drive in the final 2 1/2 minutes against an improving Illinois defense. The result: Indiana snapped an eight-game losing streak, a nine-game skid in conference play, and now is already within one win of matching last year's total.

Bazelak never doubted the Hoosiers could score in the waning moments of the opener.

Indiana can start building some sorely needed momentum. They've started two of the past three seasons with back-to-back wins and received bowl bids both times. The hope is Bazelak continues to excel in a system that he and his new teammates are still learning.

Running back Shaun Shivers, who scored the winning touchdown, played in his first game since transferring from Auburn. Camper spent the previous two seasons in junior college. And former Florida State receiver D.J. Mathews Jr. returned from a torn ACL by catching seven passes for 109 yards, including a 52-yard TD.

“I’m just really trying to keep everyone calm," Bazelak said. “That’s our offense. The whole game we’re in 2-minute (offense), so we didn’t have to do anything special. We knew we had only two timeouts, but when you get in a rhythm in this offense things start to roll.”