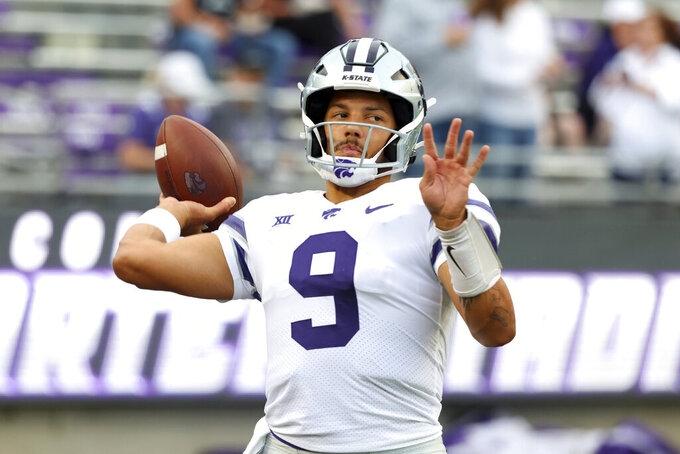 Max Duggan threw a completion a split second before a defender’s helmet struck his facemask on a targeting call, sending the TCU quarterback’s head snapping back and leaving him momentarily woozy on the ground.

The mobile Duggan took his share of collisions against Kansas State but finished the game and has No. 7 TCU alone in first place.

In a year of quarterback attrition, the Big 12 race could come down to how many are left standing, or who has a backup capable of shouldering the load. Most teams have lost their starting quarterback at some point this season. A few remain out, others have returned and the status of some for Saturday’s games are a day-to-day observation.

Just as he’s shaken off hard tackles, Duggan deferred questions about the recent pounding, instead pointing to the real battle in the trenches.

“My job’s pretty easy. When you’re a quarterback, you don’t get hit too often,” Duggan said after TCU beat Kansas State 38-28 on Saturday. “The guys up front, the guys blocking out on the defense, they’re getting hit every play. Those guys are never complaining, never talking about their hits. So the least I can do is get up after a play.”

Duggan might not be thriving had redshirt freshman Chandler Morris not sprained his left knee in the season opener. Despite being a three-year starter, Duggan lost the top position over the spring and summer to Morris. But Duggan has played so well that Morris has remained on the bench despite being available. Duggan has thrown 19 touchdown passes with one interception. His 181.8 efficiency rating is fifth in the nation.

While Duggan led TCU back from an 18-point deficit to beat Kansas State, the Wildcats are having their own quarterback issues.

Starter Adrian Martinez left after the first series with an undisclosed injury and did not return. Backup Will Howard threw for two touchdowns and ran for another, then hurt his shoulder on a third-quarter running play. Howard left the game briefly but was brought back in after a third-string freshman threw an interception.

Coach Chris Klieman said Tuesday he's not sure whether Martinez will be available but Howard should be ready when Kansas State, tied for second place with Oklahoma State, prepares to host the Cowboys on Saturday.

Oklahoma State's Spencer Sanders, playing through undisclosed injuries in the past few weeks, led the Cowboys to a comeback win over Texas on Saturday. Sanders is tied with Duggan for the Big 12 lead with 23 total touchdowns — seven more than anyone else.

“He’s feeling better,” Oklahoma State coach Mike Gundy said. “He’s not where he was. You can tell.”

Quarterback injuries seem to have hit the Big 12 harder than other Power 5 conferences, although there are some notable season-ending injuries elsewhere, including Devin Leary at North Carolina State (pectoral muscle).

Some schools can't catch a break: Utah State has seen injuries to its top three quarterbacks, forcing one to end his college career, and Texas A&M its top two.

Despite the frequency of quarterback visits to the training room, the Big 12 is on pace to challenge a high scoring mark under the current 10-team format that started in 2012. The league-wide average of 35.4 points scored is more than five points better than each of the past two seasons and the same as that averaged over the 2015 season.

One reason for the success is Kansas, which has far surpassed its scoring total for all of last season.

Jalon Daniels led Kansas to a 5-0 start, then injured a shoulder against TCU. The Jayhawks lost that game and the next two. Kansas now has an open week and no timetable has been set for Daniels’ return. Oklahoma’s Dillon Gabriel returned from a concussion on Oct. 15 to help the Sooners snap a three-game losing streak. Both quarterbacks were injured in back-to-back weeks on plays by TCU linebacker Jamoi Hodge, whose hit on Gabriel was ruled targeting.

Quinn Ewers of Texas missed three games with a collarbone injury. Texas Tech has gone 3-3 since Tyler Shough injured a collarbone in the season opener. Texas Tech coach Joey McGuire said Shough has been medically cleared and will be available to play against Baylor this week. Redshirt freshman Behren Morton has started the last two games, going 1-1.

Baylor’s Blake Shapen sustained a head injury Oct. 13 in the third quarter at West Virginia but returned Saturday to lead the Bears to a win over Kansas. West Virginia’s JT Daniels and Iowa State’s Hunter Dekkers also have yet to miss a start.

By this point in the season, every coach must address a growing list of players who may or may not be available.