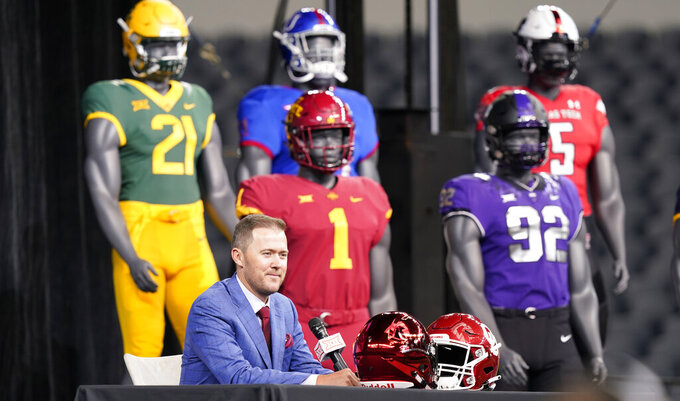 ARLINGTON, Texas (AP) — Big 12 Commissioner Bob Bowlsby said Wednesday the league is doing everything it can to encourage vaccinations for all of its athletes, though the conference won't mandate shots for the coronavirus.

Those not getting vaccinated, however, will be required to submit to multiple COVID-19 tests weekly, as was the case for all athletes throughout the pandemic-affected 2020-21 school year.

“I think it’s very short-sighted to not get vaccinations. Even if the Delta variant weren’t around, it makes sense to get vaccinated,” Bowlsby said during his introductory remarks at football media days.

“If indeed the Delta variant is as virulent and as infectious as it’s been reported to be, not getting vaccinated, you’re rolling the dice in terms of whether you’ll contract the virus,” he said. “And beyond that, for a student-athlete, you’re also rolling the dice on whether or not you’re going to be able to participate because you’re going to be in a testing protocol if you’re not vaccinated.”

TCU defensive end Ochaun Mathis said Horned Frogs players have not been pressured, but have been given ample opportunities to get the shots. He said he got vaccinated, and likes the additional benefit of not having to wake up early a couple of times a week for testing.

While not providing a specific number, Oklahoma coach Lincoln Riley said “a significant amount of our team is vaccinated. I think we’re heading in, my opinion, a great direction.”

Riley, whose Sooners are the overwhelming preseason favorite after winning the last six Big 12 titles, said he respects that vaccinations are a personal choice. But there is also the reality of being coaches and teammates together. He said those not vaccinated are going to be held to “a different standard, and you’re going to have the opportunity to lose games and not be available.”

Hundreds of U.S. colleges and universities say they will require students to be vaccinnated to return to campus or live in the dormitories this fall, including Notre Dame and Michigan. But many have no such requirements.

Nine of the 12 Pac-12 schools are requiring all students -- including athletes --- to be vaccinated to return to campus in the fall semester. In the Southeastern Conference, Commissioner Greg Sankey discussed the topic recently on the Paul Finebaum Show.

“What we can do is remove our roster numbers from last year -- if you recall, 53 available players, a certain number of offensive linemen, defensive linemen, quarterbacks -- and say, ‘You’re responsible to have a healthy team and be present at the scheduled time on the scheduled date to play,’” he said. "That very clearly says you’re going to have to adjust your thought process, your operations in order to make sure you play.”

Riley said there was an increase in Oklahoma players getting vaccinated after PGA golfer Jon Rahm was removed from the Memorial with a six-stroke lead after the third round because of a positive COVID-19 test. Even though he felt no symptoms, he missed out on the chance for a $1.67 million winner's check the next day. North Carolina State was also dropped from the College World Series because of COVID-19 protocols.

“I think some of those real-life things that have happened that we’ve seen have put in perspective for some of these guys,” Riley said. “Also, I think as time goes on and people see that the vaccination has widely been very, very successful. I think it’s opened the door for more and more people to get it, including our guys.”

There are still people who come up to West Virginia defensive tackle Dante Stills in Morgantown and think he is his older brother, Darius.

Dante Stills, who is getting ready for his senior season with a chance to be the leader of the Mountaineers defensive line, just tells them that Darius is in Las Vegas, where he will go to NFL camp later this month with the Raiders.

“Our whole lives, it’s been like that. People think I'm Darius and he's Dante," Dante said with a smile. “So it's normal.”

The brothers are the sons of former West Virginia standout Gary Stills, who went on to play nine NFL seasons.

The 6-foot-4 Dante Stills, three inches taller than his brother, has 28 1/2 career tackles for loss, three more than Darius had at West Virginia.

While Oklahoma has won the last six Big 12 titles, Kansas State is 2-0 against the Sooners under coach Chris Klieman.

“I don’t know if we have anybody’s number. I have so much respect for Lincoln (Riley) and his staff and his team, and they are a great, great team, and they deserve to be on top because of their body of work,” Klieman said. “It’s not a one-game season. It’s a body of work, and Lincoln and Oklahoma have proven that year-in and year-out that they are the elite team in our conference.”

The Wildcats were 8-5 in Klieman's debut in 2019, then dropped to 4-6 last year after quarterback Skylar Thompson suffered a season-ending shoulder injury in the third game. Thompson threw for 334 yards and a touchdown in a 38-35 win at Norman last Sept. 26 before getting hurt the next week.

Oklahoma quarterback Spencer Rattler, the Big 12′s top passer last season as a freshman, was picked the preseason offensive player of the year in voting by media, who also chose Iowa State linebacker Mike Rose as the top defender and Oklahoma running back Eric Gray as the top newcomer.

Rattler threw for 3,031 yards with 28 touchdowns and seven interceptions last season. Rose was fourth in the league last season with 8.0 tackles per game and had 96 overall. Gray is a transfer from Tennessee, where as a sophomore last season he was sixth in the SEC with 85.8 yards rushing per game.