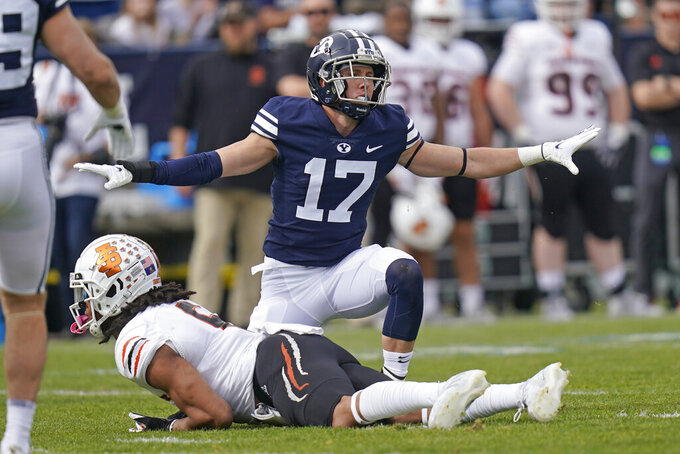 BYU defensive back Matthew Criddle (17) celebrates after breaking up a pass to Idaho State wide receiver Jared Scott in the first half during an NCAA college football game Saturday, Nov. 6, 2021, in Provo, Utah. (AP Photo/Rick Bowmer)

PROVO, Utah (AP) — Jaren Hall threw for 298 yards and four touchdowns, all in the first half, and No. 17 BYU demolished Idaho State 59-14 on Saturday.

Baylor Romney took over in the second half for Hall, who finished 2 yards shy of his fourth 300-yard performance in the last five games.

Puka Nacua had six catches for 120 yards and a touchdown for the Cougars, who debuted at No. 15 in the College Football Playoff rankings released Tuesday. Keanu Hill caught four passes for a career-high 92 yards and a touchdown. Hill also blocked a punt and recovered it in the end zone for BYU’s final score late in the fourth quarter.

BYU (8-2) finished with 560 yards of offense, averaging 7.4 yards per play, in its third straight victory. The Cougars have won 19 of 22 games over the past two seasons.

“Kalani has found his groove and I’m so glad the foundation that we laid is starting to pay off,” defensive lineman Uriah Leiataua said.

Sagan Gronauer threw for 167 yards and a touchdown for Idaho State (1-8), who fell to 0-7 all-time against the Cougars.

The Bengals gained 2 yards in the first quarter and did not complete a pass. Meanwhile, BYU’s offense encountered virtually no resistance as it raced to a 42-7 halftime lead.

“Once we got through that first quarter offensively, we started to move the ball a little bit,” Idaho State coach Rob Phenicie said. “I think Sagan settled down finally and we saw some good stuff moving forward.”

Hall’s highlights included a 23-yard touchdown pass to Puka Nacua midway through the second quarter and a 13-yard dart to Neil Pau’u just before halftime on which Pau’u dragged two defenders and fell across the goal line.

The Bengals’ lone first-half points came after Tyler Gonzalez recovered a fumble at the BYU 17. Jared Scott caught a 6-yard pass from Gronauer with 1:20 left before halftime.

BYU cashed in on an Idaho State turnover in first quarter. Hall scored on a 1-yard keeper after Pepe Tanuvasa returned an interception 16 yards to the Idaho State 6.

The Cougars now get a week off after playing 10 games in 10 weeks — a stretch that included six Power Five opponents.

Idaho State: The Bengals went three-and-out on three of four first-quarter drives and committed a turnover on the other, setting the tone for the blowout.

BYU: The Cougars scored touchdowns on five straight drives to open the game and did not punt until the third quarter. They totaled 397 yards and averaged 9.0 yards per play before halftime.

BYU has feasted on FCS opponents since becoming an FBS independent. The Cougars have won 18 straight games against lower-division teams dating to 1960, when they fell to Hawaii 13-6 in their season finale. BYU also hasn’t lost to a current member of the Big Sky Conference since falling 12-0 to Montana in 1959.

Hill’s touchdown off a blocked punt in the fourth quarter was the first such score for BYU since a 41-24 victory over Air Force in 2004. He drew motivation from a challenge by defensive graduate assistant Kyle Griffitts, who promised to shave his head once the Cougars finally blocked a punt.

“He kept telling us he was going to block one,” Sitake said.

Beating a struggling FCS opponent won’t move the needle for BYU in either the AP Top 25 or the College Football Playoff rankings.