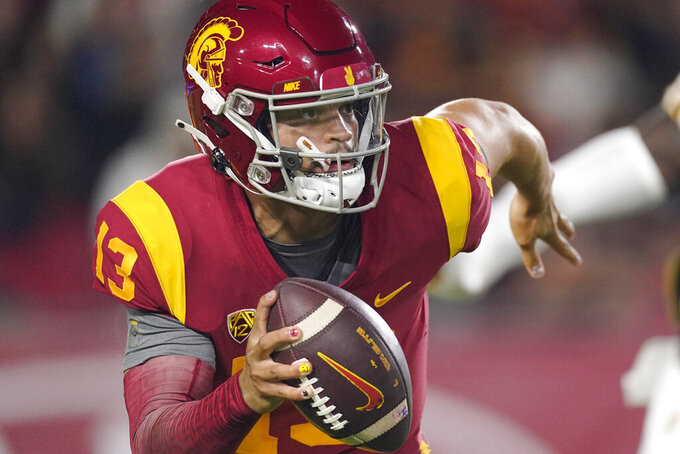 LOS ANGELES (AP) — Although Caleb Williams and No. 6 Southern California never trailed against Arizona State, the Trojans also couldn't pull away during a fairly average first half by their newly ambitious standards under coach Lincoln Riley.

“It just wasn't quite us,” Riley said. “Wasn't quite the edge that we're used to playing with, and that we expect to play with.”

Williams and the Trojans found their edge in the second half, and they used it to slice straight through the Sun Devils on the way to another big win.

Williams passed for 348 yards and three touchdowns and rushed for another score, keeping USC unbeaten in Riley's first season with a 42-25 victory Saturday night.

“You come off a win like Oregon State, and it's almost like you feel like you're over the hump, and you're thinking, ‘OK, we made it,’” Dye said. “That's absolutely never the case. You're never at the point where you've made it. We had to realize that, and we did in the second half.”

Caleb Williams led the way. The Oklahoma transfer marched the Trojans up and down the field against Arizona State for 485 total yards while demonstrating that his elusiveness, accuracy and playmaking acumen were all fully intact.

Emory Jones passed for 243 yards and Xazavian Valladay rushed for two touchdowns for the Sun Devils (1-4, 0-2), who gave an encouraging effort in their second game under interim head coach Shaun Aguano after the firing of Herm Edwards.

“Absolutely there is improvement,” Aguano said. “I’m sitting here because I’m not real happy about it, but I thought we could play and finish this game against them. We came in at halftime, we had the attention of those kids.”

Valladay and Jones scored early TDs to keep the game close for nearly three quarters, but Arizona State's offense stalled on three straight drives while USC pulled away. The Sun Devils had minus-6 yards rushing in the second half.

“Offensive side, they did their job," ASU safety Khoury Bethley said. “They kept us in the game today. Defense, we didn’t step up to the plate, though. ... Offense played like that, you think you should win the game. So defense, we're taking full responsibility for this one.”

Jordan Addison had eight catches for 105 yards for the Trojans, who are off to their first 5-0 start since 2020 — but their first in a full season since 2006, near the height of the Pete Carroll era.

USC's first three drives all ended in touchdowns, with Caleb Williams sneaking in for the first score. The quarterback also showed off his elusiveness while evading several near-sacks, and his across-the-body scoring pass to Mario Williams was an exceptional play.

But Arizona State was nearly as effective on offense, making three straight scoring drives longer than 50 yards to stay within 21-17 at halftime. Jones went 9 of 11 for 117 yards, while Valladay rushed for 57 yards and made a 29-yard TD reception.

USC's defense again struggled to get important stops, continuing a theme for a unit that didn't get the massive influx of elite transfer talent received by the offense. The Trojans also committed six penalties in the first half, including an offensive holding call that erased an 82-yard TD catch by Mario Williams.

Hudson scored his first career touchdown with 10:54 to play. Valladay replied with 6:16 left, but Addison recovered an onside kick before Dye put it away with several gritty runs leading up to his second TD with 3:46 to play.

Caleb Williams committed USC’s first turnover of the season on the opening drive of the second half, underthrowing Addison in the end zone for an interception by Timarcus Davis. The Trojans had been the only team left in the FBS without a turnover.

Arizona St.: The Sun Devils might be in transition, but they clearly don't intend to write off the rest of this season, as they showed with a spirited effort against a Top-10 opponent. Jones and Valladay are big-time playmakers who could make ASU dangerous in the second half of the season.

USC: Caleb Williams is the engine driving the Trojans' powerhouse offense, and he was in elite, feisty form. If he stays healthy, USC has the potential and talent to outscore just about anybody.

The defense? It still isn't at the offense's level, but that won't matter in some games.