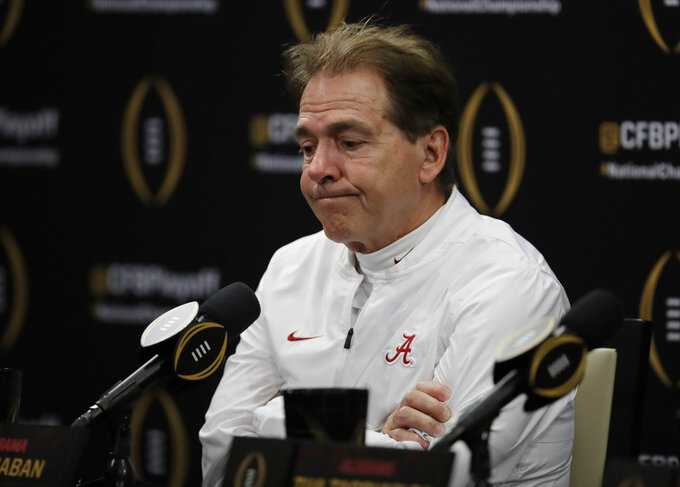 SANTA CLARA, Calif. (AP) — By the time the fourth quarter rolled around, Nick Saban knew his seventh national title would not come on this night.

He stalked the Alabama sideline as he always does, barking into his headset and at anyone within earshot.

There was nothing he could do.

The greatest coach in college football history watched his team get outplayed, out-lucked — and, yes, outcoached.

"I just had a feeling that I didn't do a very good job," Saban said. "I never really ever got comfortable with what we needed to do to win this game."

In what will certainly go down as the most humiliating performance of his Crimson Tide reign, Saban's team was blown out 44-16 by Clemson in the national championship game Monday night, a result that stamps the Tigers as the country's pre-eminent program and leaves Bama in the rare position of chaser instead of chasee.

"You learn a lot from experiences like this," Saban said. "Certainly, we didn't play well tonight. We had some issues."

To say the least.

The Tide was stuffed on a ridiculously inept attempt at a fake field goal.

And the outcome was essentially sealed when cornerback Saivion Smith tumbled to the turf with an injury, leaving Justyn Ross all alone for a 74-yard touchdown pass that stretched Clemson's lead to three touchdowns midway through the third period.

Saban flashed a bit of his notorious temper early on, barging into the middle of a defensive huddle on the bench to berate a unit that looked helpless against Lawrence & Co.

But he had accepted his team's fate by the time Clemson smothered the Tide's last gasp early in the final period. On fourth-and-goal from the Tigers 2, Tagovailoa took off running on a play that never had a chance. Clelin Ferrell slammed him to the ground for a 7-yard loss.

Saban, watching from the sideline with his arms folded, simply turned and walked the other way, head down, perhaps already pondering what he'll do to ensure this never happens again.

"One game doesn't define who you are," said Saban, whose team was No. 1 all season, until the very last game. "I also told the players that sometimes we learn more when things don't go well, when we lose. You have to learn how to lose as well as how to win."

Saban arrived at Alabama in 2007 and launched the greatest dynasty the game has ever seen. Sure, there were occasional disappointments along the way — the stunning Kick Six loss to Auburn, a championship game defeat to Clemson two years ago on a touchdown pass with a single second remaining — but Alabama was always in the game.

Not on this night in the Silicon Valley.

The tone was set on the Tide's third snap of the game. Tagovailoa, runner-up for the Heisman Trophy and a player of such immense talent that the old-school Saban went against his instincts to unleash a wide-open offensive style, unleashed a throw that was so errant it was hard to tell which of two receivers he was going to.

A.J. Terrell picked off the pass and took off the other way on a 44-yard touchdown that gave Clemson the lead less than 2 minutes into the game.

Alabama didn't fold right way, getting into a back-and-forth shootout that looked like it might go on all night. The Tide led 16-14 after a field goal in the opening minute of the second quarter.

Stunningly, it would be the last points of the night for a team that was highest-scoring of Saban's career, averaging nearly 48 points a game.

Tagovailoa delivered another pick on a deep pass into triple coverage. Clemson kept doing whatever it wanted on offense, building a 31-16 lead by halftime.

It certainly wasn't over at that point. Alabama had rallied from 14 points down to Georgia in the Southeastern Conference championship game. A year ago, the Tide overcame a pair of 13-point deficits to beat the Bulldogs in overtime for the national title — the fifth of Saban's Alabama career, the sixth overall when counting his 2003 BCS championship at LSU.

But whatever confidence Alabama might've had from its previous experiences was ripped away on the opening possession of the second half. After driving quickly down the field to the Clemson 22, with a chance to make it a single-score game, the Tide stalled out. Then, on fourth down, Saban sent out his shaky kicker — Joseph Bulovas had already missed an extra point — for a 40-yard field-goal attempt.

The Tigers were surely on the lookout for a fake.

The play needed to be imaginative and executed perfectly to have any chance. Instead, Alabama went with a strangely simplistic call. Holder Mac Wilson took the snap, bolted from his crouch and attempted to run over right tackle for the required 6 yards.

He came up 8 yards short.

The Clemson receiver didn't stop running until he got to the end zone.

As the final seconds ticked off the clock, Saban strolled to center of the field to offer his congratulations to Clemson coach Dabo Swinney.

Then, while orange and purple confetti fluttered all around him, Saban walked slowly toward the tunnel.

No one even noticed.