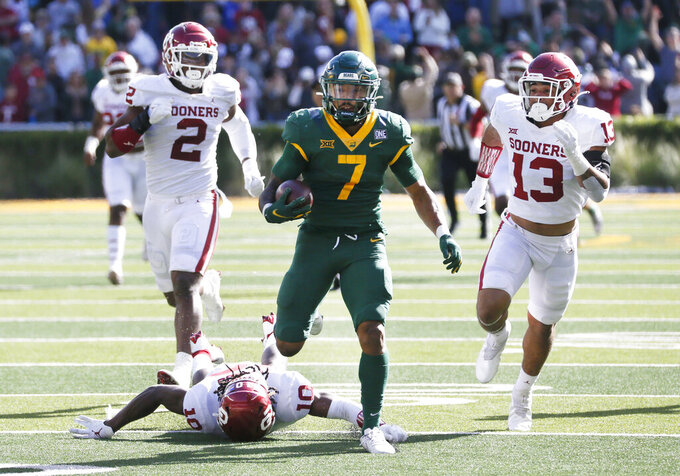 Baylor running back Abram Smith (7) breaks free on a 75-yard run as he is chased by Oklahoma linebacker David Ugwoegbu (2), safety Pat Fields (10) and linebacker Shane Whitter (13) during the second half of an NCAA college football game in Waco, Texas, Saturday, Nov. 13, 2021. The Southeastern Conference's most prolific offense clashes with one of the better defenses in the Big 12 when No. 8 Mississippi meets sixth-ranked Baylor in the Sugar Bowl. (AP Photo/Ray Carlin, File)

NEW ORLEANS (AP) — Mississippi quarterback Matt Corral wasn't about to miss a chance to make history in the Sugar Bowl.

The potential first-round NFL draft choice has spent four years helping the Rebels (10-2) rise from the bottom of the Southeastern Conference standings to a No. 8 ranking and the cusp of the program's first 11-win season — if they can beat sixth-ranked Baylor (11-2) on Saturday night.

Corral said the bond he has formed with Ole Miss teammates over several seasons outweighs the risk of an injury that could sink his draft stock — and his rookie pay day along with it.

“If I was them and in their shoes and they had a quarterback that was in the same position, like, I just couldn't live with what they would think of me, like, just leaving," Corral said. "No one really understands how close we really are. And it would have just been a wrong thing to do, just not playing.”

A prolific 2021 season has helped the dual-threat Corral join the likes of Archie and Eli Manning in discussions about the great QBs in the history of Ole Miss, which first fielded a football team in 1893.

The 6-foot, 200-pound Corral has passed for 3,339 yards and 20 touchdowns. He also has rushed for 597 yards and 11 touchdowns, periodically showing the toughness and strength to run right over and through would-be tacklers.

“When I look at Matt Corral, I just see a competitor. I see a winner. I see someone who wills his team,” said Baylor coach Dave Aranda, who oversees the Big 12 champion Bears' defense.

“In today’s age, a guy his caliber staying with it and playing in this game, I think, speaks a lot,” Aranda said.

Corral by no means dismissed everyone who advised him against playing. He was eager to listen to those he felt had his best interest in mind.

He said a personal trainer (whose name he did not disclose) told him that while he understood Corral's desire to play, he could not in good conscience advise putting his potential NFL prosperity at risk in a bowl game.

“I wouldn’t play in the game, but whatever you do, I have your back,” Corral recalled the trainer telling him. "That’s the only person that made me think about (sitting out), but I couldn’t do it.”

Corral's decision means coach Lane Kiffin's offense — which averaged an SEC-best 506.7 yards and 35.9 points per game this season — will take the Superdome field in full force against a highly regarded Baylor defense led by Big 12 Defensive Player of the Year Jalen Pitre.

It'll make Aranda's job harder, but it also makes the Sugar Bowl more compelling, and it sounds like the Baylor coach prefers the latter.

“So excited to be able to see him,” Aranda said of Corral. "Just love college football and love competitors and I think he’s a great one."

QB Gerry Bohanon's running ability (303 yards and nine touchdowns) also has helped Baylor average 31:37 of possession time. Whether that formula will work against high-scoring Ole Miss is another matter, but it presents a challenge for the Rebels' defensive front, which allowed 183 yards rushing per game this season.

Ole Miss did not have any players opt out of the Sugar Bowl — a gratifying development for Kiffin, now completing his second season with the Rebels.

“We didn’t have a conversation,” Kiffin said. “It’s not like someone came in wavering and we had to talk them out of it, or go over the pros and cons. I think it says a lot about this team.”

Baylor's defense allowed an average of 19.2 points per game and did not allow more than 30 points in any contest.

Baylor led the Big 12 with 24 takeaways, which included 16 interceptions, and gave up a conference-low 12 TD passes. The Bears also ranked 15th nationally against the run, allowing 116.9 yards per game.

Pitre, who plays a hybrid safety-linebacker position, has led the unit with 14 tackles for loss, 2 1/2 sacks, three forced fumbles and two interceptions.

This Sugar Bowl is full of coincidences.

Kiffin and Aranda both have worked with former LSU coach Ed Orgeron.

Aranda was on Orgeron's staff when the Tigers won a national title in the Superdome two seasons ago.

Orgeron and Kiffin were both assistants on Pete Carroll's staff at Southern California, and Kiffin later hired Orgeron as an assistant on his staffs at Tennessee and USC.

Kiffin's father, Monte, an Ole Miss analyst, returns to the city and stadium where he worked as Saints defensive coordinator in 1995.

Aranda, meanwhile, replaced Matt Rhule, who left Baylor for the NFL after coaching the 2019 Bears to the Sugar Bowl. Rhule, now in his second season with the Carolina Panthers, is scheduled to be in New Orleans on Saturday night because the Panthers play the Saints in the Superdome on Sunday.