Dykes opens things up at TCU since replacing Patterson 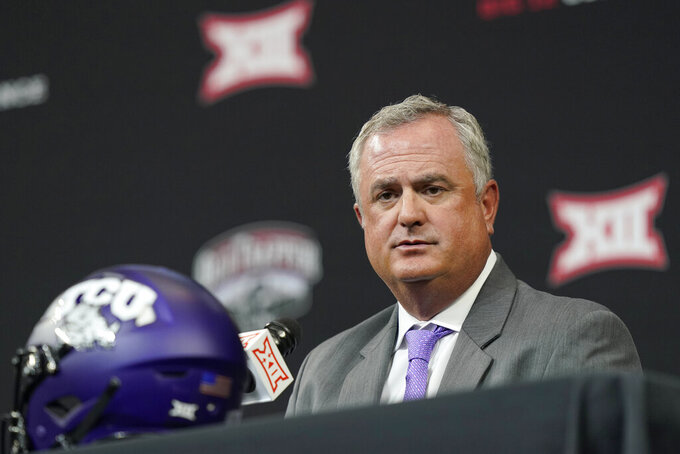 FORT WORTH, Texas (AP) — TCU senior linebacker Dee Winters and his teammates certainly weren't used to the sometimes carnival-like atmosphere during spring practice with fans around the field watching their every move.

“It was pretty abnormal,” Winters said. “Three years without it, so it was kind of different.”

New Horned Frogs coach Sonny Dykes got an inside look at the program while working in an off-field role for Gary Patterson in 2017. All of Patterson's practices were pretty much limited to essential personnel only.

Dykes has opened things up.

“I got over here in ‘17 and I was just like, `Wow, this is a great place, Fort Worth’s a great town. All the stuff is here that you need to be able to build a great football program.’ And obviously coach Patterson had done that,” Dykes said. “It was a little bit of eye-opener for me, just having been over here and then, kind of the circumstances worked the way that they did, and here I now. It’s been a interesting journey.”

Dykes went 30-18 the past four seasons at SMU, the most successful stretch for the Mustangs in three decades since being the only program shut down by the NCAA’s so-called death penalty.

Patterson's school-record 181 wins over 21 seasons include the Rose Bowl in an undefeated 2010 season. But the Frogs are 23-24 since making the Big 12 championship game in 2017. They split their final four games after Patterson and the school mutually agreed Oct. 31 to immediately part ways, and finished 5-7.

“TCU is about winning championships,” Dykes said. “I want to coach in this kind of environment where there has been that level of success and there’s that level of expectations as well.”

Max Duggan and Chandler Morris went into fall camp competing to be the starting quarterback. Duggan started 29 games the past three seasons, and Morris started twice last year while Duggan was dealing with a fractured bone in his foot.

“You’re not going to have a season without some adversity," said Duggan, adding his frustration was more about another losing season for TCU than his injury.

Morris threw for 461 yards and two touchdowns in his first start against Baylor. His 531 total yards were the second-most in school history, but he got hurt in the next game.

Two of fastest and most skilled players on TCU’s team wear the same number, and go against each other in practice.

No. 1 on offense is junior receiver Quentin Johnston. Senior cornerback Tre’Vius Hodges-Tomlinson is No. 1 on the defensive side.

“Kind of leaving the friendship at the door, and between them two lines kind of just battle out to the end,” said Johnston, who averaged 19.9 yards per catch last season and scored six TDs. “At the end of day, it helps both of us, it makes both of us better.”

Tomlinson is the nephew of NFL Hall of Fame running back and former TCU standout LaDainian Tomlinson, but the All-Big 12 defensive back is making a name for himself.

“I’ve always known what I was going to do, growing up with the confidence that I have and the chip that I carry,” Tre' Tomlinson said. “My uncle, he is outstanding. ... Personally, I have to live up to myself first. That’s how I go about it. I think of myself as that great someone too.”

The Frogs have added two transfer defensive backs who could make an immediate impact, Mark Perry had 72 tackles and three interceptions last season at Colorado, while Josh Newton had 48 tackles and eight pass breakups for Louisiana-Monroe.

Perry's first game for the Frogs will be on the road against his old team. TCU has a Friday night opener at Colorado on Sept. 2.

TCU closes its non-conference schedule Sept. 24 with Dykes returning to SMU. The 100th Iron Skillet rivalry game last year in Fort Worth had a chaotic postgame scene when some Mustangs players tried to plant their school flag on TCU’s midfield logo. The Big 12 opener is Oct. 1 against ninth-ranked Oklahoma before five conference games on the road, including at No. 10 Baylor and No. 12 Oklahoma State.