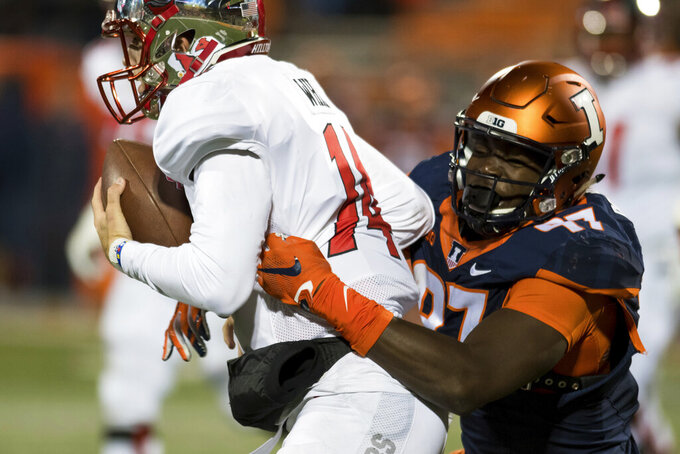 CHAMPAIGN, Ill. (AP) — Former Illinois football star Bobby Roundtree, who was paralyzed from the waist down in a swimming accident two years ago, died Friday, the university said. He was 23.

Illinois said Roundtree, a Florida native, died in the Tampa area where he was living. The cause of death was not immediately known.

Roundtree played two seasons for the Illini, starting as a freshman and becoming one of the top pass rushers in the Big Ten as a sophomore in 2018. He had 11.5 sacks in his two seasons.

On May 18, 2019, Roundtree was home in Florida when he suffered a spinal cord injury jumping off a boat. He was unable to move his legs after the accident.

“From his first day on campus, Bobby was a leader. His work ethic, competitive fire, and drive for excellence set him apart,” Illinois athletic director Josh Whitman said in a statement. “Following his tragic accident, those same qualities allowed him to tackle his new challenges with the same vigor and determination that we had seen on the football field. In so doing, he continued to bring light and inspiration to the lives of those around him — and, in fact, to so many people who had never had the pleasure of meeting him.”

Roundtree never walked again, but as recently as Monday posted a video on Twitter of himself working to stand with assistance in a rehab facility. Last year, he told the Chicago Sun Times he believed he would walk again.

“I believe I could’ve been further along strength-wise, could’ve been more independent,” Roundtree told the newspaper. "I also feel if the COVID wasn’t around, others would be able to come see me more.”

Roundtree said then he was living with his mother, Jacqueline Hearns, and younger sister. He attended Largo High School in Florida, just north of St. Petersburg.

“In the face of incredible adversity, he demonstrated he was, and always will remain, a true champion,” Whitman said. “Our thoughts and prayers are with his family. We will support them, and our players, coaches, and staff who knew him well, as we struggle to understand this terrible news and, ultimately, look to celebrate the remarkable young leader we have lost.”