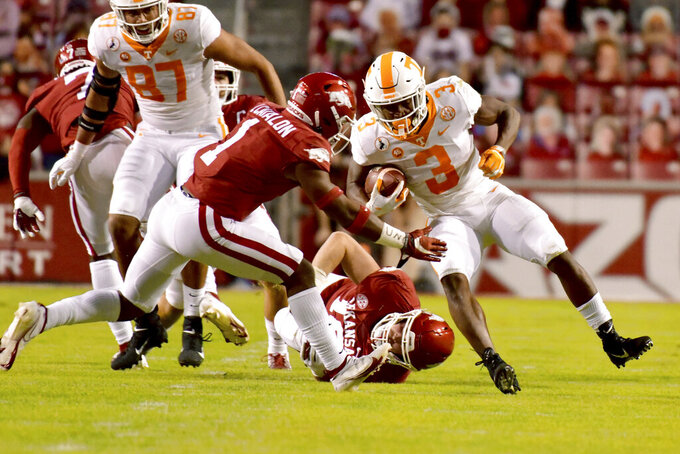 Tennessee running back Eric Gray (3) is tackled by Arkansas defensive back Jalen Catalon (1) during the first half of an NCAA college football game Saturday, Nov. 7, 2020, in Fayetteville, Ark. (AP Photo/Michael Woods)

FAYETTEVILLE, Ark. (AP) — Feleipe Franks threw three touchdown passes in the second half to lead Arkansas in a 24-13, come-from-behind win against Tennessee on Saturday night.

The Razorbacks (3-3, 3-3 Southeastern Conference) trailed 13-0 at halftime before scoring on four straight drives in the third quarter. Each touchdown came faster than the one before as Arkansas found the end zone on 16-play, 3-play and 2-play consecutive series.

“We did talk (at halftime) about making some explosive plays. We had to get our engine revved up,” Arkansas coach Sam Pittman said. “Feliepe threw them. We did need something momentum wise, some kind of big play to get us kind of going. It seemed like there were several of them, boom, boom, boom.”

Franks finished 18 of 24 for 215 yards passing and three scores.

Tennessee quarterback Jarrett Guarantano, who left late in the third quarter with a head injury, completed just 5 of 8 passes for 42 yards. Brian Maurer and Harrison Bailey, Guarantano’s replacements, were a combined 6-of-13 passing for 65 yards with two interceptions.

After allowing Tennessee (2-4, 2-4) to score on three of its four full-length drives in the first half, Arkansas gave up just 16 yards of total offense in the third quarter and countered with 257 of its own in the same 15 minutes.

Burks became the first Arkansas player since Keon Hatcher in 2016 to catch a touchdown pass in three straight SEC games. He finished with five receptions for 95 yards, five yards short of becoming the first Razorback to have three straight 100-yard games since 2016.

Burks' 59-yard touchdown catch was the biggest blow to the Volunteers, and in the best quarter of Arkansas’ season.

“(Scored) Twenty-four points and (allowed) 16 yards. ... You know what momentum is and we had it. We rode it through the third quarter,” Pittman said.

Tennessee: The Volunteers have lost four straight games after beating South Carolina and Missouri to open the season.

Tennessee’s three quarterbacks combined to throw for just 107 yards in the loss. It’s the lowest number of yards passing Arkansas has allowed in an SEC win since beating Missouri in 2015.

Arkansas travels to No. 8 Florida on Saturday.