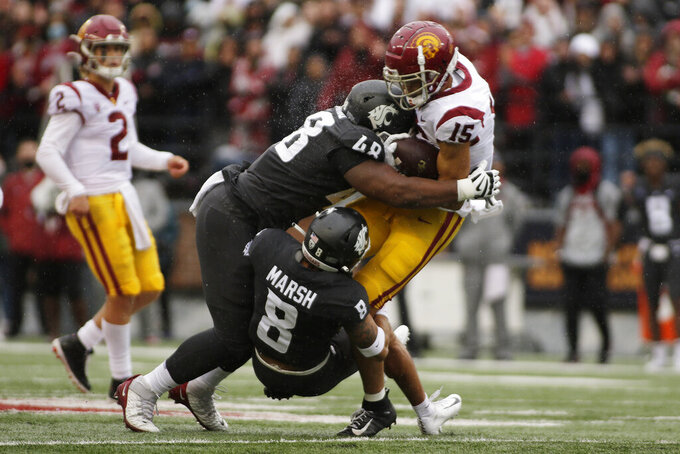 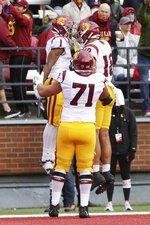 PULLMAN, Wash. (AP) — Freshman quarterback Jaxson Dart came off the bench to throw four touchdown passes as Southern California rebounded from last weekend's tough loss to Stanford, and the subsequent firing of coach Clay Helton, with a 45-14 victory over Washington State on Saturday.

Dart replaced an injured Kedon Slovis on the second series of the game. He completed 30 of 46 passes for 391 yards, with two interceptions, as Southern California (2-1, 1-1 Pac-12) won in its first game under interim coach Donte Williams, the first Black head coach in program history.

“I'm super fortunate to be around a group of guys and coaches who show a ton of resiliency and confidence in one another,” Dart said. “And like coach said, our main goal, and we're going to face some adversity, but we have to go 1-0, and win that moment.”

Dart was surprised to find himself playing early in the game.

“I think those moments always hit you when you are least expecting it," Dart said. “It was the first drive and we were just starting to get something going and I was just super excited, even though I felt terrible for Kedon.”

Drake London caught 13 passes for 170 yards for the Trojans.

Jayden de Laura threw for 117 yards and a pair of touchdowns for Washington State (1-2, 0-1), which jumped to a 14-0 lead and then watched the Trojans score 45 unanswered points, mostly in the second half.

“In the first half we were pressing,” Williams said. “Mistakes were being made.”

Williams did not have details of Slovis' injury. “For all I know he's gonna be available to practice this coming week,” Williams said of Slovis.

Last Saturday’s 42-28 loss at home to Stanford was the final straw for Helton, who was let go two days later. Williams, who was USC’s cornerbacks coach, will lead the team for the remainder of the season.

Washington State put together an 89-yard drive on its first possession, and de Laura threw a 12-yard touchdown pass to Travell Harris for a 7-0 lead.

Slovis was shaken up when he was sacked by Andrew Edson during the Trojans' opening possession, and replaced by Dart on the next series.

Dart was intercepted by Daniel Isom and the Cougars eventually had first and goal at the 1. But they failed to score on three runs and a pass play to turn the ball over on downs.

“The fourth down stop down there definitely is one that could have changed the game,” Washington State coach Nick Rolovich said of his team's failure to score.

Rolovich said the Trojans did a nice job of shutting down WSU's rushers for much of the game, as the Cougars rushed 30 times for 99 yards.

“That's a talented football team,” Rolovich said of USC, noting his team did not get a first down in the third quarter. “Our defense was on the field for too many plays.”

Asked what message he would give his team, Rolovich said: “Stay together. See how you can get better. We've got a long season in front of us.”

After a USC punt, the Cougars marched down the field again, and de Laura found Harris with a 7-yard touchdown pass for a 14-0 lead.

Late in the first half, the Trojans drove 93 yards, with Dart hitting Gary Bryant Jr. on fourth down for a 38-yard touchdown pass. That cut Washington State's lead to 14-7 at halftime.

Washington State's Harris fumbled while returning the opening kickoff of the second half, and the Trojans recovered. Dart fired a 5-yard scoring pass to London to tie the score at 14-14.

Victor Gabalis replaced an injured de Laura at quarterback for Washington State at the beginning of the second half.

Dart threw a 3-yard scoring pass to Bryant to lift the Trojans to their first lead at 21-14 with 6:16 left in the third.

Armani Marsh intercepted a Dart pass deep in WSU territory, giving the Cougars the ball at their own 5. Two plays later Gabalis fumbled when he was hit by Drake Jackson and Tuli Tuipulotu recovered in the end zone for a touchdown that lifted USC to a 28-14 lead.

De Laura returned at quarterback for the Cougars on the next series and was immediately intercepted.

Southern California holds a 61-10-4 advantage in the series.

Southern Cal’s trip to Pullman included some drama. After landing in nearby Lewiston, Idaho, on Friday, the Trojans’ team plane tipped backward on the tarmac, lifting the plane’s nose into the air after the grounds crew did not put the plane’s tail stand in place. Only coaches and staff members were still on the plane, according to a USC statement. The players, who sit in the front half, had exited and no one was injured, the statement said. The grounds crew quickly leveled the plane.

The firing of Helton seems to have lit a fire under the Trojans, who pounded Washington State behind the throwing of true freshman quarterback Jaxson Dart. Washington State made numerous mistakes and was outscored 28-0 in the third quarter. The Cougars played their first three games at home and have only a 1-2 record to show for it.

Washington State goes on the road for the first time, playing at Utah on Saturday.