Gamblers bet on new US football league despite no history 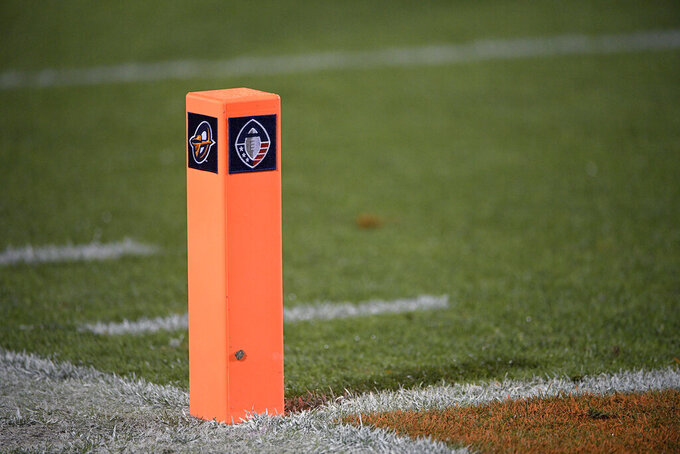 FILE - In this Feb. 9, 2019, file photo, logos for the Alliance of American Football, right, and the Orlando Apollos adorn an end zone pylon before an AAF football game between the Apollos and the Atlanta Legends on Saturday, Feb. 9, 2019, in Orlando, Fla. Almost no one knows the players, and there’s virtually no history to look back on. But that’s not stopping people from making bets on America’s newest professional football league, the Alliance of American Football. (AP Photo/Phelan M. Ebenhack, File)

ATLANTIC CITY, N.J. (AP) — Almost no one knows the players and there's virtually no history to look back on.

But that's not stopping gamblers from making — and bookmakers from taking — bets on America's newest professional football league, the Alliance of American Football (AAF).

With one weekend of games under its belt, the league has already drawn interest from some bettors — not nearly the action of a typical NFL game but enough to encourage sportsbooks that the fledgling league's games are worth offering on a betting menu.

While no bookmaker would reveal precisely how much was bet on last weekend's inaugural slate of games, many said they were encouraged.

"It was more than I expected," said Joe Asher, CEO of William Hill US, which operates books in Nevada, New Jersey and several other states. "Tiny in comparison to the NFL, but not bad considering it's a brand new league."

"It was light in football terms, but understandably so," he said. "Some books had pretty robust action, comparable to an NBA game, while at others, it trickled in."

One obvious challenge: How to set betting lines — or any expectations — from a league with no past results aside from an exhibition game. Many outlets limited bets on the infant league to $500 to $1,000.

"It's a challenge, for both bookmakers and sports bettors, when there is no history on the teams and very little history on most of the players involved," said Mattias Stetz, chief operating officer of Rush Street Interactive, which operates the sportsbooks at two Pennsylvania casinos.

"The handle was relatively small to start, but we expect it to pick up as players get more familiar with the league," Stetz said. "TV ratings were surprisingly high for the AAF this weekend, and betting handle tends to follow public interest, so we are excited to see where things go from here."

Rood said the league invited sportsbooks to watch a preseason game and review training camp scrimmages to familiarize themselves with the teams. He said 60 percent to 70 percent of bets came from sophisticated gamblers, or "sharps" looking to profit from a situation in which nobody knows much about the league.

William Hill's lines on the initial AAF games were "not as tight, but our guys do their best," Asher said.

League officials did not respond to a message seeking comment from The Associated Press.

The league's debut the weekend after the Super Bowl gave some football fans something else to bet on with the NFL wrapped up. Ivan Mitef of Kansas City bet $200 on each of the AAF's first four games, winning three of them by betting the under on the total points scored in each game.

But he said he was less sure than usual about these bets, placed with an offshore internet site.

"I wasn't too comfy on some of the spreads just yet; I wanted to see them play a game," he said. "I figured new league, some of the teams might not have jived yet, so I thought it was a good idea to take all the unders."

Others remained wary of risking cash on a brand-new league.

"It's too early to make a bet on them," said Jerry Brown, a sports bettor from Columbus, Ohio. "It'll probably have to be a few games in to see how teams play for me to feel comfortable."

The league's regular season is scheduled for 10 weeks, plus two weeks of playoffs including a title game on April 27.

Westgate has the Arizona Hotshots and the Orlando Apollos as the co-favorites to win the AAF championship at 2-1; the San Antonio Commanders and the Birmingham Iron at 6-1; the Salt Lake Stallions at 8-1; the San Diego Fleet at 12-1, and the Memphis Express and the Atlanta Legends at 40-1.

MGM also has Arizona and Orlando as its top favorites to win the title.

Rood predicts the league will be popular among football fans and bettors in part because of games being televised on NFL Network or CBS Sports Network.

"People want to bet on what they can watch," he said. "I don't really think it's going to threaten college football or the NFL anytime soon, but for a new spring league, it's got some legs under it."