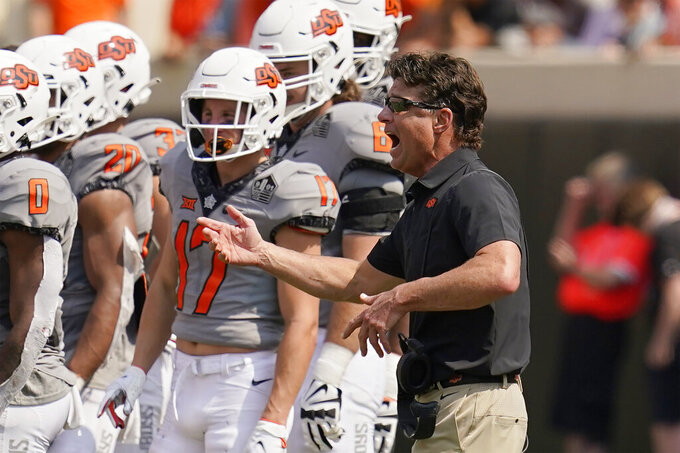 Oklahoma State head coach Mike Gundy gestures during a timeout in the second half of an NCAA college football game against Tulsa, Saturday, Sept. 11, 2021, in Stillwater, Okla. (AP Photo/Sue Ogrocki)

Consider Oklahoma State coach Mike Gundy among those who are enamored of what he’ll see up close for the first time this weekend.

Yes, the blue turf is still a bit of a novelty for those who have never experienced a game at Boise State.

“I felt like Gene Hackman and Hoosiers, felt like taking a tape measure and making sure they know it’s 52.5 wide and 120 long,” Gundy said. “My personal opinion is that they have a unique situation there, which I think is pretty cool what they did. They kind of live in their own world out there, and they have their own way of thinking. They’ve been good at it, and that was a neat addition for them in my opinion.”

Besides admiring the blue turf, the Cowboys will also be attempting to prove their worth as a potential Top 25 team when they face Boise State in an intriguing nonconference matchup Saturday night.

Oklahoma State is 2-0 but it hasn’t been a very impressive start. The Cowboys struggled to shake Missouri State in the opener and trailed Tulsa 14-7 going into the fourth quarter before a 21-point barrage and a 28-23 victory.

The trip to Boise is an opportunity to prove a young team is worthy of recognition before starting conference play next week against Kansas State.

“I expect certain things from these young players at whatever position. If they come up short, I get it, I understand it and I know going in what they’re gonna do,” Gundy said.

Boise State (1-1) thumped UTEP at home last week, an emphatic response to its season-opening loss at UCF, where the Broncos blew a 21-0 lead. While Hank Bachmeier and Khalil Shakir were the offensive stars against UTEP, the bigger story was Boise State finally getting some turnovers.

Last season, the Broncos forced three turnovers in seven games. Against UTEP, the Broncos came away with three interceptions and three fumble recoveries.

“What you emphasize is what you get,” Boise State coach Andy Avalos said. “There’s other things, too, that we’ve got to step it up on with how we’re emphasizing, how we’re teaching, how we’re modeling and how we’re really rewarding.”

Oklahoma State would like to get its rushing attack going after sputtering through two games. Quarterback Spencer Sanders is the Cowboys’ leading rusher with 62 yards, all coming against Tulsa. LD Warren and Jaylen Warren have three rushing touchdowns but just 102 combined yards on 44 carries. Boise State gave up 255 yards rushing to UCF, but held UTEP to 104 last week.

The visit from the Cowboys is a big deal for a program that keeps trying to convince Power Five opponents to visit. Last year was supposed to feature the crown jewel of those Power Five matchups with Florida State scheduled to visit, but the game was canceled due to the pandemic.

There were other Power Five programs scheduled to come to Boise but changes have left visits from Oregon State (2024), Oregon (2025) and matchups against future Big 12 teams UCF (2023), Cincinnati (2028) and BYU (home-and-away yearly minus 2024) as the highlights going forward for the Broncos.

“We got a great challenge in front of us. We know that our fan base, these are the types of games that excite them,” Avalos said. “So to be able to have one here in Boise is unbelievable opportunity.”

Sanders was held out of the season opener against Missouri State due to COVID-19 protocols and saw sophomore Shane Illingworth throw for 315 yards. Sanders managed only 173 yards passing against Tulsa but did throw for two touchdowns and added yards on the ground.

Gundy said Sanders’ performance would have been better if his protection was better.

Oklahoma State will be the first active Big 12 member to visit the Broncos for a regular season game. Iowa State faced Boise State in the 2002 Humanitarian Bowl played on the blue turf, a 34-16 Broncos victory. Boise State also played TCU at home in 2011 during the brief time both were members of the Mountain West. TCU spoiled Boise State’s hopes of a perfect season with a 36-35 win.

This will be Boise State’s fifth game ever against a Big 12 opponent.