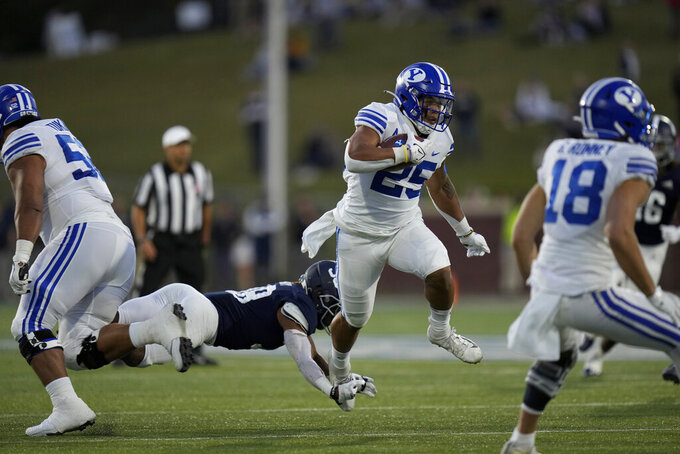 BYU running back Tyler Allgeier (25) carries the ball in the first half of an NCAA college football game against Georgia Southern, Saturday, Nov. 20, 2021, in Statesboro, Ga. (AP Photo/Paul Abell) 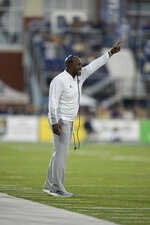 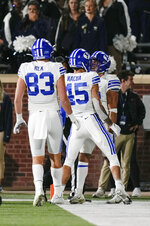 STATESBORO, Ga. (AP) — Jaren Hall had 211 of his 312 yards passing in the first half, Jakob Robinson picked off two passes in the second half and No. 14 BYU beat Georgia Southern 34-17 on Saturday night.

Tyler Allgeier, the nation’s seventh-leading rusher, finished with 136 yards on 25 carries to help the Cougars (9-2) win their fourth straight game.

Before a near capacity crowd at 25,000-seat Paulson Stadium, Georgia Southern (3-8) fell short in its attempt to beat the highest-ranked team to visit Statesboro. The Eagles had played eight previous games against ranked opponents, beating Appalachian State in 2018 and 2019.

In the first meeting between the two schools, BYU coach Kalani Sitake said Georgia Southern fans were throwing food at his team in the first half.

“We were getting hit by burritos on the sideline," Sitake said. “It was pretty hostile, so I’m really proud of how the guys bounced back and made some adjustments. We talked about it at halftime. Playing our style of football, and I thought we did that in the second half."

Robinson picked off Amare Jones' pass with a diving catch late in the third and intercepted Connor Cigelske, taking his first snaps as Georgia Southern’s quarterback, early in the fourth. Robinson’s second pick was a sensational over-the-shoulder catch at the sideline, setting up Puka Nacua’s 29-yard reception in the left corner of the end zone and a 34-17 lead.

“I just saw that he ran a corner route," Robinson said. “We were in cover-2. I just jumped it. It was not (easy), but somehow I caught it."

Hall has passed for at least 300 yards in four of his last five games.

The Cougars went up 27-17 early in the third thanks to several missed tackles by the Eagles and a 1-yard run by Allgeier. That gave Allgeier 18 rushing touchdowns. He began the game tied for the national lead.

Jake Oldroyd kicked a pair of field goals midway through the second and in the closing seconds before halftime to make it 20-17 BYU at intermission.

The Eagles pulled within four early in the second. Logan Wright caught a 19-yard pass and a 10-yarder before running in from three yards out.

After BYU failed on a fourth-down try from the Georgia Southern 43, the Eagles went ahead 17-14 on Wright’s 11-yard run off right guard.

BYU took a 7-3 lead on its opening drive. Hall completed his first pass of the game, covering 14 yards, and the Cougars converted a fourth down before Lopini Katoa ran in from 5 yards out.

Nacua caught a 42-yard pass on a deep post route over the middle and Allgeier broke off a 14-yard run to spark BYU’s second drive, which ended with Nacua’s 5-yard touchdown catch and a 14-3 lead in the first seconds of the second quarter.

“When they came out of the locker room, I didn’t know if it was the Buffalo Bills or BYU," Georgia Southern interim coach Kevin Whitley said. “My god, these guys are big. Very big, very physical. They lived up to everything I thought they’d be. They’re a national program. So I knew a lot about the staff, those guys, before this week.

“Very talented team, very hard-nosed team. They give us a lot of lessons that we’ll take forward, not only at the end of this year but moving into next year.”

The Cougars lost linebacker Max Tooley, their leading tackler at the time with four solo stops, to an ejection for targeting midway through the second. Nacua went down with an injury a few snaps later but he returned in the third. Nacua’s temporary loss was further exacerbated by the injury last week to standout receiver Neal Pau’u, who will miss next week’s game, too.

“I was a little banged up but good enough to go," Nacua said. “I never want to miss any games so I wanted to get back out there for my boys. I just got hit kind of in an awkward area."

BYU: The Cougars are bowl eligible for the 16th time in the last 17 seasons and fifth in six seasons under Sitake. BYU, an independent, played a Sun Belt Conference team for the fourth time. Last season the Cougars beat Troy and Texas State but lost to Coastal Carolina.

Georgia Southern: Starting quarterback Justin Tomlin did not play because of a concussion sustained in last week’s win at Texas State. The second-string QB, Cam Ransom, was out with a shoulder injury. That left Cigelske and Jones taking turns under center early in the game before Cigelske took the bulk of the snaps.

The victory likely won’t mean a rise in the Top 25. BYU was a 19 ½-point favorite and was expected to manhandle the Eagles.

The schools agreed to a home-and-home format in 2017. Georgia Southern is slated to visit to Provo in 2024, but that game could be in limbo with BYU headed to the Big 12 in 2023.

BYU: At Southern California on Saturday as the Cougars try to improve to 5-0 against the Pac-12.