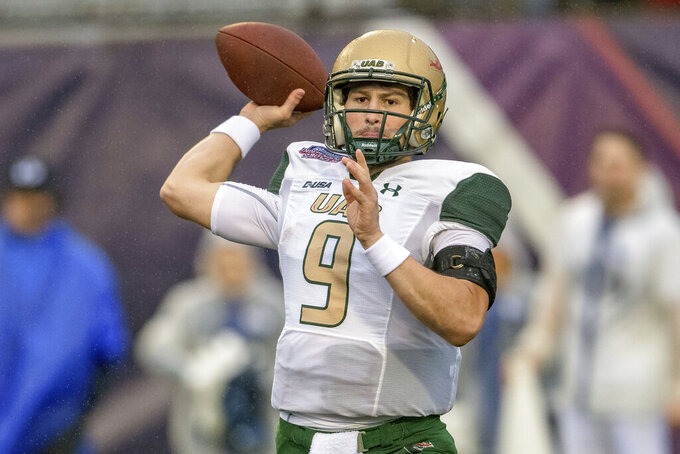 SHREVEPORT, La. (AP) — Dylan Hopkins broke the Independence Bowl record for completion percentage in wind and driving rain, connecting on 19 of 23 passes for 189 yards and three touchdowns in UAB's 31-28 victory over No. 12 BYU on Saturday.

With UAB (9-4) facing fourth-and-7 with six minutes remaining, coach Bill Clark passed on a field-goal attempt, and Hopkins threw a 14-yard, go-ahead touchdown pass to Trea Shropshire, the only player from Louisiana on either roster.

“We knew to win the game we had to go for it,” Hopkins said.

BYU (10-3) appeared to be in good position to at least tie it, but Samson Nacua fumbled after making a catch inside UAB’s 25 with 3:36 remaining. The Blazers ran nine straight running plays to exhaust the remaining time.

“What a way to finish the game," Ckark said. "We protected the ball. To win the game at the end — running the ball when they knew it was coming.”

DeWayne McBride ran for 183 yards and a score on 28 carries for UAB.

“UAB played a fantastic game,” BYU coach Kalani Sitake said. “It was a tough game for us, but we will recover from this. We’ll learn, we will grow and we will be better. It is still a fantastic season, but it’s tough because we have to say goodbye to those seniors.”

BYU and running back Tyler Allgeier fought back from a 14-point deficit, tying it twice and eventually taking the lead in the fourth quarter. Allgeier ran for 192 yards and had three touchdowns.

Quarterback Baylor Romney — starting in place of injured Jaren Hall — put the Cougars back in the game with a strong start to the second quarter. Allgeier had a 1-yard scoring run, and Nacua had a 2-yarder to tie it.

UAB regained the lead with Hopkins' 23-yard pass to Prince before halftime.

Allgeier ripped off a 62-yard touchdown run to tie it again 1:17 into the third quarter. His 1-yard run put the Cougars up 28-24 on the second play of the fourth quarter.

BYU: The Cougars missed an opportunity for their highest postseason ranking in 26 years. The Cougars finished last season at No. 11 and No. 5 in 1996.

UAB: With two scores Saturday, Prince moved to fifth on UAB’s career touchdown receptions list (15) and fourth on the single-season list (10). The Blazers held a 14-0 led when linebacker Tyler Taylor was ejected for targeting late in the first quarter.