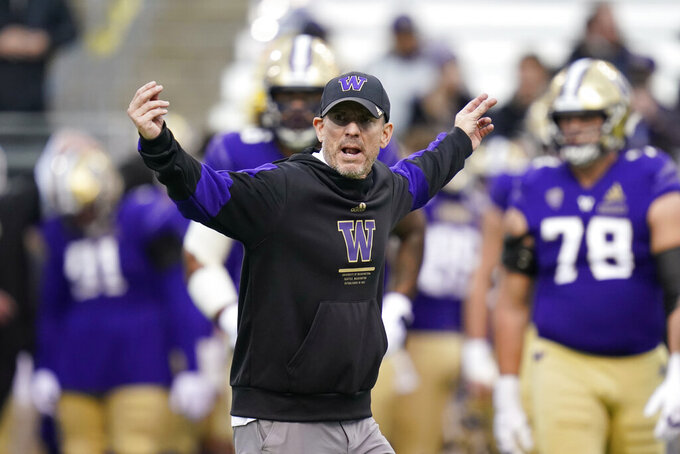 BOULDER, Colo. (AP) — The Washington Huskies have a chance to salvage what's been a turbulent season.

Two wins could be an elixir. Two wins would make them bowl eligible — a mark they've reached each season since 2010 — in a year that started on the wrong foot with a loss to an FCS school and now includes the firing of their head coach.

Step one comes Saturday in Boulder, when the Huskies (4-6, 3-4 Pac-12) face Colorado (3-7, 2-5). This will be the second straight contest without coach Jimmy Lake, who served a one-game suspension for a sideline incident and then was let go Sunday.

“It’s our job to help these kids navigate through a tough time,” interim coach Bob Gregory said. “It’s not easy for these guys. Their world has changed a little bit.”

The prospect of a bowl remains a motivator. The Huskies need to beat the Buffaloes and then rival Washington State in the Apple Cup.

“You’ve got to finish what you started. There’s no quit,” Gregory said. “We’ve just got to keep those guys focused that way. ... We still have a lot of really cool stuff to play for.”

Pride is all the Buffaloes have to play for at this point. After making it to a bowl in Karl Dorrell’s first season, the Buffaloes went through a four-game skid that pretty much derailed their postseason chances.

This will be Gregory’s second game in charge at Washington. He stepped in last weekend in a 35-30 loss to Arizona State as Lake served his suspension for swatting at and then shoving one of his players during a loss to Oregon. The incident only added to the heat on Lake during a swift fall for a team that began the season ranked in the AP Top 25 before losing to Montana of the FCS ranks. Lake went 7-6 in the 13 games he coached.

“I’m sure their players are still fighting, and want to finish the season the right way," Dorrell said. "So it’s going to be a great game.”

The last time Washington failed to qualify for a bowl game was 2009. The Huskies opted not to play in a bowl game last year due to COVID-19 issues.

“We can have a winning season. Apple Cup. Bowl game. All that kind of stuff,” Gregory said. “That’s what we’ve got to do.”

Starting QB Dylan Morris received the majority of the playing time last week against Arizona State, but highly touted freshman Sam Huard saw some action as well. Huard was 3 of 5 passing for 20 yards.

“I think we had to do that, give ourselves a little bit of a spark and give Sam a chance to play,” Gregory said. “I think it helps him. It helps Dylan to have a little competition."

Gregory was noncommittal about how the playing time at QB will be split against Colorado. He even suggested there is a chance Colorado State transfer Patrick O’Brien might see the field this week as well.

There's a possibility All-Pac-12 linebacker Nate Landman (shoulder) could be back in the Buffaloes' lineup. He leads the team in tackles with 71. He's trying to become the first Colorado player to lead the team in that category for four seasons.

“He’s chomping to play,” Dorrell said. “I’m sure he’s going to try to get himself on the field.”

The Huskies have gone 85 games without allowing a team to score more than 35 points. The last team to reach that mark on them was UCLA during a 44-30 win in 2014.

What’s more, Washington has surrendered just three plays longer than 40 yards. There are three FBS teams that have allowed less — Arizona (one), along with Georgia and Colorado (two).

Washington is 31 for 31 in its trips inside the red zone. The Huskies have 21 touchdowns and 10 field goals.