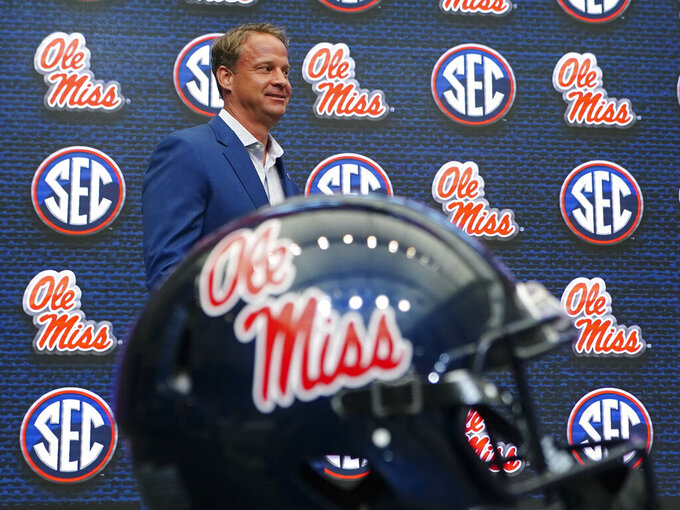 ATLANTA (AP) — Mississippi coach Lane Kiffin provided a strong hint he and other SEC coaches who were former assistants on Alabama coach Nick Saban’s staff, including Georgia coach Kirby Smart, may grow tired of questions about their former boss.

Kiffin smirked when his first question Monday at the Southeastern Conference Media Days asked him to recall Saban’s philosophy on trick plays.

“Well, Kirby Smart used to say sometimes you come up here and just talking about Alabama,” Kiffin said. “So our first question somehow is about Nick Saban, so ... that’s pretty usual.”

Kiffin smiled before adding Saban liked trick plays — but only when they worked.

CRAWFISH AND OYSTERS FOR KELLY

New LSU coach Brian Kelly was bold enough to sample a Louisiana accent when he was hired to a 10-year deal in November.

At his first SEC Media Days appearance, Kelly was asked to use his best Cajun accent when talking about his favorite Louisiana food. This time, he deferred.

“Understand now, I have a Boston, Midwestern, Louisiana accent now,” Kelly said. “It’s three dialects into one. It’s no longer family, I got all kinds of stuff to throw at you. Just be ready.”

“The best? You know, it’s probably the crawfish etouffee,” he said. “I don’t know how you top that. I would say also the grilled oysters. If you haven’t had grilled oysters, try that. That will get your cholesterol level up high pretty quickly. That’s pretty good, too.”

Missouri coach Eliah Drinkwitz said he supports renewing rivalries with Texas and Oklahoma when those schools join the SEC in 2025.

“I'm all for it,” Drinkwitz said. “I think I said up here earlier that I think the beauty of college football is the rivalries that we have. I think it’s the shared traditions and pageantry of the game.

"I think we've got to be careful that we don’t miss that or lose that in search of better TV contracts or better TV exposure. We’re going to lose the basis of who we are.”

Football is still king in the state of Mississippi, but the baseball programs have been hot topics, too.

Ole Miss won the College World Series title in June, a year after rival Mississippi State pulled off the same feat. So college baseball was a topic the Rebels players were happy to talk about.

“I think that was just great for the state of Mississippi that we could also do it,” Ole Miss offensive lineman Nick Broeker said.

And in the title aftermath, Broeker and defensive lineman Cedric Johnson said the celebration was something to see.

“Oxford was crazy. I’ve never seen Oxford like that,” Broeker said. “Every place was just slammed. Every restaurant. Everything. It was just unbelievable how everybody really came together. It was awesome to see.”

Added Johnson: “You could feel the energy. It was just crazy. Everybody on social media, just the whole campus, you could just feel it. Just the energy radiating throughout everybody.”

The first three teams appearing at media days all have ongoing quarterback battles impacted by the transfer portal.

Not exactly an uncommon storyline these days.

At Mississippi, USC transfer Jaxson Dart is vying with Luke Altmyer to replace standout quarterback Matt Corral, a third-round draft pick by the Carolina Panthers in this year's NFL draft.

Arizona State transfer Jayden Daniels has joined the quarterback competition at LSU. Daniels is vying for the job with Myles Brennan and Garrett Nussmeier.

Obviously none of the coaches are tipping their hands as to any current front-runner. Kelly summed up what he’s looking for from whoever emerges.

“Number 1, they’ve got to take care of the football,” Kelly said. “Number 2, they have to get the ball to playmakers. I have playmakers on offense that are already in place. Number 3, they’ve got to make plays.

“The ultimate decision-making on who that quarterback is, he’ll have to hit those three notes. I think all of these guys can do that. We’ll have to put them in that position so we can evaluate that.”