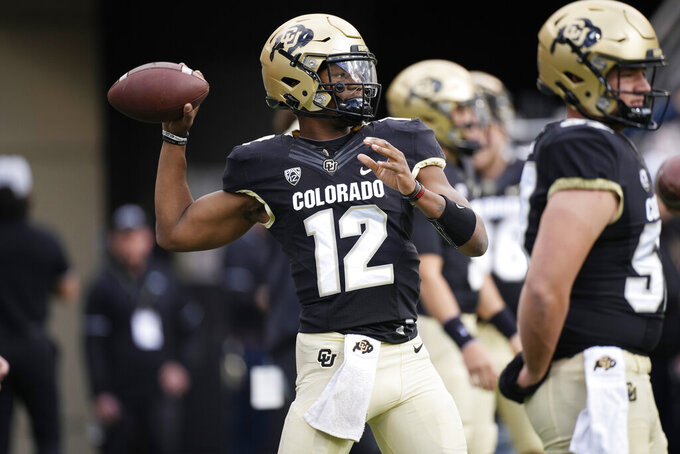 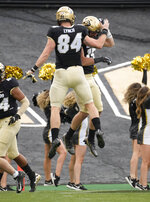 BOULDER, Colo. (AP) — Out with a shoulder injury, Nate Landman still wanted in on the action.

No longer content to merely listen in on the headset in street clothes late in the game, the Colorado senior linebacker ducked into the back, changed into his uniform and took the field for the game-ending kneel-down.

Only fitting that a defensive player came up with yet another memorable moment Saturday.

Jack Lamb returned a fumble 88 yards for a touchdown, one of four turnovers created by Colorado, and the defense sealed the game with a fourth-down stop as the Buffaloes held on for a 20-17 win over Washington.

“Well, we found another way to win at home,” Colorado coach Karl Dorrell cracked. “It's interesting to look at the stat sheet, and you would say, 'How did they win that game?'”

Here's why: Colorado was outgained by a 426-183 margin, converted 2 of 13 third-down opportunities and saw Washington dominate time of possession.

But the Buffaloes (4-7, 3-5 Pac-12) relied on their bend-don't-break defense with the offense struggling most of the afternoon. Colorado intercepted two passes by Dylan Morris and forced two fumbles. Linebacker Carson Wells wrapped it up when he hurried Morris into an incompletion on fourth down. It gave the Buffs the ball back on downs to run out the clock.

Out there went Landman, who's been hurt for the last month but dressed in his uniform as part of Senior Day. He spent most of the afternoon standing on the sideline in street clothes as he helped fire up the defense.

“He told me he was going to do it,” Wells said. “I told him he should have taken a snap.”

The Huskies (4-7, 3-5) are assured of their first losing season since 2009. It's been a tumultuous week for the team with head coach Jimmy Lake being fired last weekend.

“I don’t have any magical answers,” Washington interim coach Bob Gregory said. “We can’t turn the ball over. Got to be able to score some points, and we weren’t able to do that.”

The Buffaloes had the ball at the Washington 7 yard line after recovering a fumble late in the third quarter. They had to settle for Cole Becker's 22-yard field goal that made it 13-10.

Soon after, Nikko Reed picked off a Morris pass in the end zone to thwart a Huskies drive. Brendon Lewis's 2-yard dive into the end zone extended the lead to 20-10.

The Huskies responded with Ja'Lynn Polk catching a pass, breaking a tackle and racing 55 yards for a score with 2:30 remaining.

“Got to score some points and can’t turn the ball over,” Gregory said. “I mean, it’s pretty, pretty simple.”

The big play of the day was turned in by Lamb, who scooped up a fumble after a mishandled snap by Morris in the first quarter and raced 88 yards for the score. It was the third-longest fumble return for a TD in Buffaloes history.

Before the fumble, Washington was 31 for 31 this season in trips inside the red zone. They had 21 TDs and 10 field goals.

“It's a hard-fought win,” Dorrell said. “We've got to continue build this program the way that it used to be. We're going to get it back to that level."

The Buffaloes honored 12 players in a pregame ceremony as part of Senior Day, including the banged-up Landman.

“He wanted to be in this game particularly, the last home game,” Dorrell said. “We didn’t feel it was worth the risk. He's not completely healthy yet.”

Colorado receiver Brenden Rice appeared to hurt his left ankle early in the game. ... Lamb went into the locker room in second half with what looked like a right shoulder ailment.

Washington: Finish the season by hosting Washington State on Friday.

Colorado: The Buffs close out the season at Utah on Friday.