LSU QB Daniels on track to play against No. 8 Tennessee 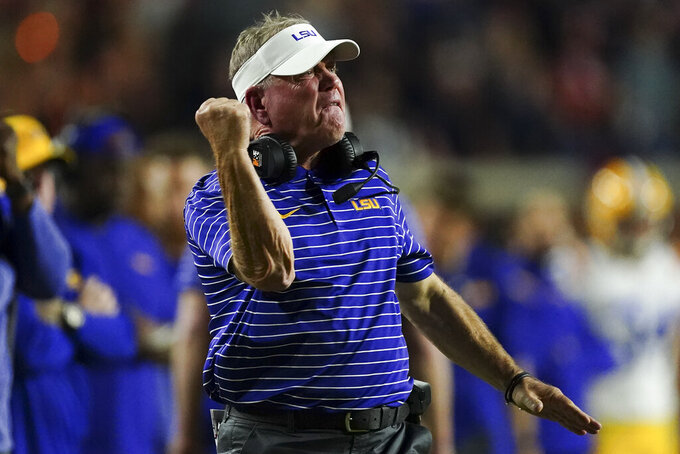 LSU head coach Brian Kelly reacts on the sideline in the second half of an NCAA college football game against Auburn, Saturday, Oct. 1, 2022, in Auburn, Ala. (AP Photo/John Bazemore)

BATON ROUGE, La. (AP) — LSU starting quarterback Jayden Daniels is expected to be back this week against No. 8 Tennessee as he recovers from a knee injury that forced him out of last Saturday's victory at Auburn, Tigers coach Brian Kelly said Monday.

Kelly added that transfer defensive back Sevyn Banks, who'd been immobilized and taken from Saturday's game in an ambulance after a head-first tackle during the opening kickoff, was diagnosed with a bruised spine and could return to action in around five to six weeks.

Meanwhile, the LSU offensive line could get a boost from the return of guard and backup center Garrett Dellinger, who appears ready to return this week from a broken left hand, Kelly said.

“Daniels is fine,” Kelly said, describing the QB's injury as a bursa sac issue. "It's not structural at all. But it's painful.

“So he was in pain,” Kelly continued. “He just felt like he was hurting the team being out there, but he felt good yesterday. The exam was clean.”

Kelly said Daniels underwent an MRI “just to make sure," adding, “he's now in a pretty good position where he feels like he's 100%.”

Daniels played during most of Saturday night's 21-17 victory, in which LSU overcame a 17-0 first-half deficit.

Daniels, an adept scrambler, rushed for 59 yards and a touchdown but struggled in the passing game, completing just eight of 20 attempts for 80 yards. Daniels was relieved by Garrett Nussmeier, who attempted five passes, completing just two for five yards.

Kelly noted that while he was happy with a victory at Auburn that included a defensive TD on a fumble return, he was far from satisfied with the state of the Tigers' passing game.

The offensive staff is now reviewing everything from the plays they're calling to receivers' route running and even the strengths and weaknesses of the various players involved in the passing game.

“We're looking at it in all those areas because this is not going to work,” Kelly said. “We can’t throw for 85 yards with the talent that we have and expect to beat the top 10 teams in the country.”

On Sunday, LSU (4-1, 2-0 SEC) entered The AP Poll for the first time this season at No. 25, just five games into Kelly's first season on the bayou since leaving Notre Dame.

Banks, a transfer from Ohio State, had missed the first three games of the season while recovering from a knee injury before finally returning on Sept. 24 against New Mexico. That remains the only full game he's played.

The good news, Kelly said, was that there were “no structural issues” with Banks' spine.

"So, really fortunate and really appreciate all the help that we got from our own medical team and certainly Auburn’s as well in what was a very scary situation,” Kelly said.

Kelly added that Banks' return-to-play protocol will be similar to that of safety Major Burns, who had a neck injury during a victory over Mississippi State on Sept. 17.

Kelly said Burns is expected to start running with the team this week and return to non-contact drills by next week.