With Martz in charge, pro football returns to San Diego 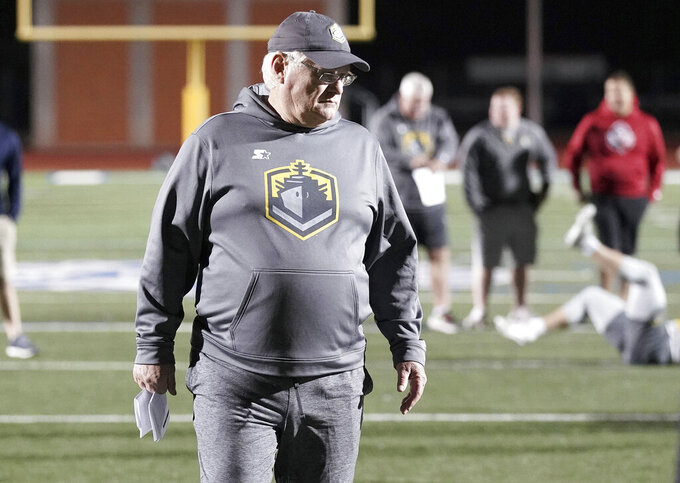 "I can't tell you what section. It was behind the Aztecs' bench on the 50-yard line, about halfway up the stands on the right side of the aisle," Martz recalled about that night in 1968.

The date was a success. Classmates at Madison High, they would marry in 1971.

Martz will be back at the aging Mission Valley stadium on Sunday night, this time on the sideline, coaching the San Diego Fleet of the Alliance of American Football against the Atlanta Legends in the return of pro football to a city that lost the NFL's Chargers to the Los Angeles area two seasons ago.

"I'm thrilled," Martz said. "I think we're all thrilled. This is something I always dreamed of as a kid. I always wanted to coach here in San Diego."

A week after literally taking it on the chin in a 15-6 season-opening loss at San Antonio, the Fleet will begin trying to fill the gaping hole left when the Chargers bolted from their home of 56 seasons after their plan for a new stadium was voted down.

"I told our players: here's a great opportunity to fill a void," Martz said. "I think there are a lot of football people here in town that want football. They want their own football team. What a great opportunity for us to provide something that will be fun for everybody."

The Alliance, co-founded by Hall of Fame executive Bill Polian and TV and film producer Charlie Ebersol, is the latest spring league. While others failed, this one has strong NFL connections and is full of players who hope to get a shot at the big time.

"This league has been needed," Martz said. "It's been needed for a long time, and for these players who want to keep playing."

Martz never realized his dream of playing at SDSU for Coryell, who later revolutionized the NFL's passing game as architect of the Air Coryell offense with the Dan Fouts-led Chargers.

"I wanted to play for him in the worst way," Martz said. "San Diego State's tight end graduated, and I thought, 'This is going to be a natural. Look at me, he's going to come and get me.' "

Coryell passed, so to speak.

"I wasn't good enough. I was small, slow and a lot of other things. Other than that, I was pretty good," Martz quipped.

Martz played at San Diego's Mesa College and at Fresno State. A roundabout coaching career eventually took him to the NFL's Rams, and he was the offensive coordinator of the "Greatest Show on Turf" team that won the Super Bowl behind Kurt Warner following the 1999 season. Dick Vermeil retired after that victory and Martz was elevated to head coach. He took the Rams back to the Super Bowl two seasons later, losing to New England.

He was fired after the 2005 season, during which he missed the final 11 games because of a heart ailment.

He later was offensive coordinator in Detroit, San Francisco and Chicago, and since 2015 had been a head coach in the NFLPA Collegiate Bowl.

That's where he met quarterback Philip Nelson, who will start Sunday night.

Martz doesn't mess around with his offense. Mike Bercovici started the opener and stayed in the game after absorbing a crushing blow to the chin that sent his helmet flying. But he threw two interceptions and was replaced by Nelson, who has been nicknamed "Admiral Nelson" after the British naval hero.

Martz doesn't consider it a quarterback controversy. He said Bercovici just isn't ready to run the offense while Nelson "has pretty good control of the passing game. He understands it really well. I like his even-keel temperament. He just needs to play."

Nelson seems to be the epitome of the AAF.

After Nelson was elevated to starter, fans discovered his Instagram account was full of photos of him looking a lot like Fabio, with long, flowing hair and showing remarkable abs. It turns out that after failing to make the Bengals or Browns, Nelson had been doing some modeling and acting while continuing to train. "Whatever you have to do to continue to keep the dream alive," he said.

"In the NFLPA game, coach Martz told me he really believed in me but he also told me I needed to cut my hair," Nelson said. "I was like, 'Really, coach?' I was spinning my wheels in the NFL and nothing really happened, so maybe it was the hair, so I got rid of it."

Then the 67-year-old coach joked: "Did you see my pictures?"

Together, Martz and Nelson will try to help heal a fan base that had its favorite team ripped away.

"This town's dying for football," Nelson said. "We're really excited to get out there, and as a team I know we want to give them a great show. We want to win and do the best for the fans and our family and friends."