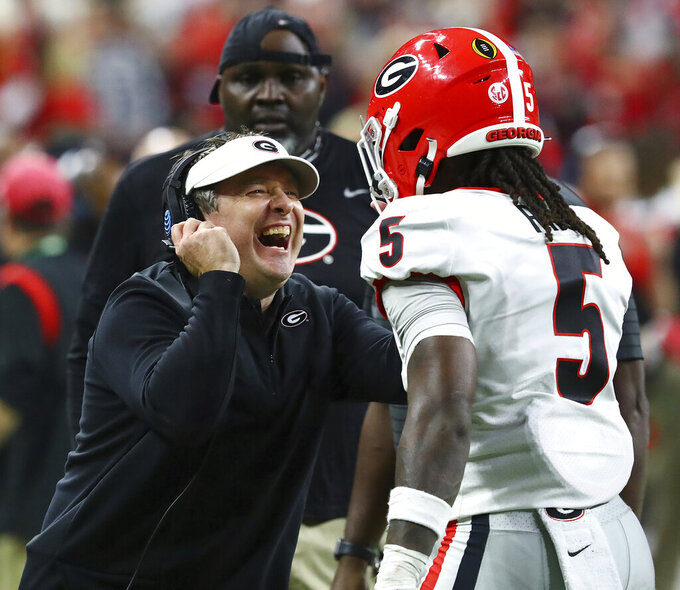 Georgia head coach Kirby Smart reacts with defensive back Kelee Ringo after Ringo intercepted a pass from Alabama quarterback Bryce Young and returned it for a touchdown late in the second half of the College Football Playoff championship football game Monday, Jan. 10, 2022, in Indianapolis. (Curtis Compton/Atlanta Journal-Constitution via AP)

The national champion Bulldogs announced Friday that Bobo, a former quarterback and offensive coordinator at the school, was joining coach Kirby Smart's staff as an offensive analyst.

Bobo and Smart were teammates at Georgia for two seasons in the 1990s.

The 47-year-old Bobo spent last season as Auburn's offensive coordinator, but he wasn't retained after a late-season skid left the Tigers with a 6-7 record.

He served as South Carolina's offensive coordinator and quarterbacks coach in 2020, finishing out his lone season with the Gamecocks as interim head coach after Will Muschamp was fired.

Bobo was head coach at Colorado State for five years, compiling a 28-35 record before he was forced out after the 2019 season.

Later, the school investigated allegations of abuse and racial insensitivity within Bobo's program — charges that were vehemently denied by the former coach.

He played at Georgia under both Ray Goff and Jim Donnan, setting several school passing records. Bobo threw for 2,751 yards and 19 touchdowns as a senior in 1997.

In 2001, he joined newly hired Mark Richt's staff as quarterback coach. Bobo coached 14 seasons at his alma mater, helping the Bulldogs win two Southeastern Conference championships and taking over as offensive coordinator in 2008.

Bobo left Georgia after the 2014 season for his first head coaching job at Colorado State. Richt was fired by Georgia the following year and replaced by Smart, who this past season guided the team to its first national championship since 1980.