Najee Harris finally gets to be Alabama's primary runner 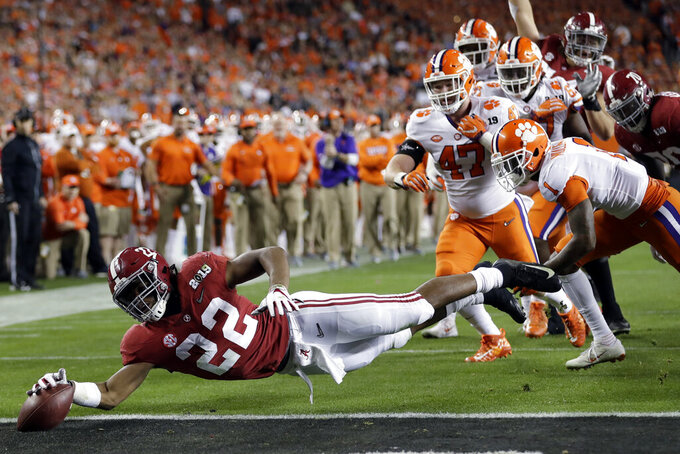 TUSCALOOSA, Ala. (AP) — Najee Harris has been a presence in Alabama's backfield since he arrived as one of the nation's top recruits.

He just hasn't been the leading man.

Harris had to wait his turn behind Damien Harris and eventual first-round NFL draft pick Josh Jacobs the past two seasons before becoming the Crimson Tide's primary tailback. He'll carry that role into this season, when the second-ranked Tide opens against Duke in Atlanta on Aug. 31.

Alabama fans and those who watched the past two national championship games already have an idea what Harris can do — even beyond his occasional hurdling of defenders. He was also rated the nation's No. 2 prospect out of Antioch High School in California in the 247Sports composite rankings.

Harris has run for 1,153 yards and seven touchdowns in two seasons while averaging 6.5 yards per carry. He ran for 59 yards against Clemson in the latest national title game and came up big late in the comeback win over Georgia a year earlier, racking up runs of 35 and 16 yards in the fourth quarter.

But there were only so many carries to go around behind Damien Harris and Jacobs. Jacobs was drafted 24th overall by the Oakland Raiders and Damien Harris went to New England in the third round.

Najee Harris and Brian Robinson Jr. are the veterans among Alabama's tailbacks. Five-star freshman recruit Trey Sanders is out indefinitely with a foot injury, according to coach Nick Saban.

The ball still appears to be in good hands, even if the Tide doesn't have the luxury of bringing a player like the 6-foot-230-pound Harris off the bench.

There's still no guarantee Harris will be getting even close to 20 carries per game. Other than Derrick Henry's Heisman Trophy season in 2015, Alabama has typically relied on the platoon system rather than one workhorse back.

That would leave more opportunities for Robinson, who has been solid in reserve roles the past two seasons. Sanders' absence opened the door for two backs — freshman Keilan Robinson or redshirt freshman Jerome Ford — with little or no experience to get some carries.

"You know ideally we want Najee to be fresh and continue to get better as the season goes on, and later in the year," offensive coordinator Steve Sarkisan said early in preseason camp. "So you manage those number of carries, importantly, as the games go. There may be games in which he is that total bell-cow and we have to go the way we need to go to do what we need to do to win the game. There may be other games in which it's not as many. Maybe we do find ways to get him the ball in the passing game and different things."

However many times Harris gets the ball, he wants to reduce his hurdling habit. It makes for good highlights and fan-pleasing plays but Harris figures "it's not the best way to go out sometimes."

"There is no thought process. It's instinct," he said. "I've got to cut it out."