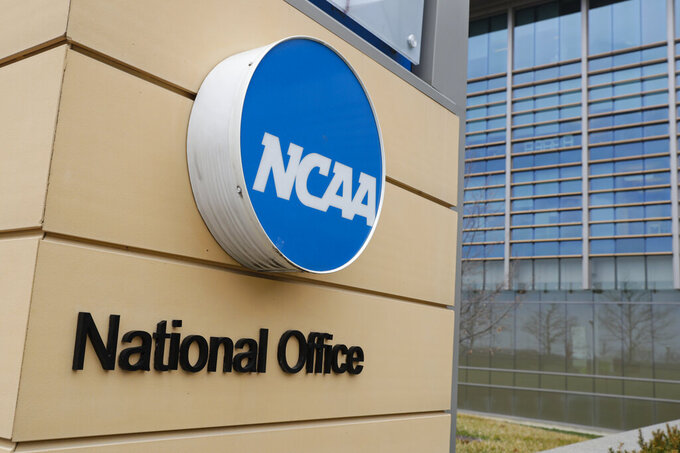 FILE - Signage at the headquarters of the NCAA is viewed in Indianapolis, March 12, 2020. An organization that advocates for reform in college sports has filed a complaint with the U.S Department of Justice against the NCAA, accusing those involved with the governing body of violating antitrust laws by capping compensation to athletes.(AP Photo/Michael Conroy, File)

The NCAA’s Division I Board of Directors approved on Wednesday new guidance to members on name, image and likeness activities, clarifying how schools, coaches and staffers can be involved with athletes’ endorsement and sponsorship deals.

The latest clarifications to the NCAA’s interim NIL policy create no new rules, but are intended to give athletic departments a better idea of what types of support fall outside existing bylaws.

“The NIL landscape is constantly evolving, and the Board of Directors decided it was important to offer further guidance with respect to a number of key questions that have arisen recently,” said Georgia President Jere Morehead, chairman of the D-I board. “As we continue to reinforce current NCAA rules, we expect to offer further guidance in the future on what should and should not be done when engaged in these activities."

The NCAA spelled out numerous activities that were permissible and impermissible.

Broadly, the NCAA said schools can not be involved in sourcing, negotiating or facilitating NIL deals for their athletes. Services related to NIL deals, such as legal review of contracts, can only be provided if those same services are available to the entire student body.

“The only services that schools are really allowed to provide for athletes under this new guidance are educational services: How to build your brand. How to handle finances, taxes and stuff like that,” sports law attorney Mit Winter said. “But (schools) can't be providing any service that’s going out and helping the athletes actually find deals unless that service is available to all students.”

The NCAA's interim NIL policy falls back on existing rules and makes it impermissible for NIL deals to be used as recruiting inducements or pay-for-play or performance-based compensation.

Schools also must adhere to state laws regarding NIL compensation for athletes. Dozens of states have NIL laws, some that already prohibit schools from facilitating deals for athletes.

“But a lot of the state laws allow facilitation of deals and some were even amended to take out prohibitions on facilitation,” Winter said.

The last time the NCAA provided guidance to members it was to clarify rules related to booster-funded collectives, their roles in providing NIL deals to athletes and recruiting.

The latest guidance said school personnel, including coaches, can be part of fundraising for collectives, booster-funded organizations that provide opportunities for athletes to profit from their names, images and likenesses. But coaches and school staff members cannot donate directly to collectives.

“School staff members also cannot be employed by or have an ownership stake in an NIL entity,” the NCAA said.

“Schools also can request donors provide funds to collectives and other NIL entities, provided the schools do not request that those funds be directed to a specific sport or student-athlete.”