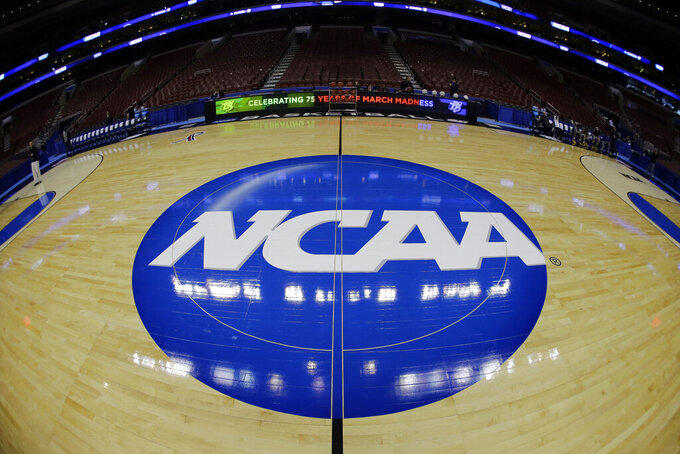 FILE - In this March 21, 2013, file photo, taken with a fisheye lens, the NCAA logo is displayed on the court during the NCAA college basketball tournament in Philadelphia. NCAA officials sent a letter to its membership Thursday, AUg. 18, 2022, noting its enforcement's staff pursuit of “potential violations” of the name, image and likeness compensation policy and emphasizing the need for schools to help investigations. (AP Photo/Matt Slocum, File)

NCAA officials sent a letter to its membership Thursday noting its enforcement's staff pursuit of “potential violations” of the name, image and likeness compensation policy and emphasizing the need for schools to help investigations.

The NCAA in 2020 lifted its ban on athletes earning money for things like endorsement and sponsorship deals, social media posts and personal appearances. An interim NIL policy still in place relies on longstanding NCAA rules against recruiting inducements and pay-for-play deals, but the lack of detailed and uniform rules have made enforcement challenging while also sparking accusations that schools are wielding NIL in the battle for recruits.

In May, the NCAA issued guidance to members aimed at trying to rein in booster-funded collectives.

The NCAA has yet to issue a notice of allegations related to potential NIL violations to a school. The letter stressed the importance of schools “self-regulating.”

“To achieve success and protect fair competition from abuses, member cooperation and communication with the NCAA enforcement staff is imperative when self-regulating requirements fail,” the letter said.

The letter said “our focus is not on targeting student-athletes, but rather the actors who pose a threat to the integrity of college sports."

The letter concluded with a plea to its 1,100 member schools with nearly 500,000 athletes to report improprieties.

“Investigations can be challenging and the enforcement staff needs help from member schools. Specific information about contacts or transactions will expedite investigations and help us secure truthful accounts," the letter said. “We understand why coaches and student-athletes are reluctant to provide documentary evidence and details on the record, but it’s critically important in our effort to protect compliant programs.”