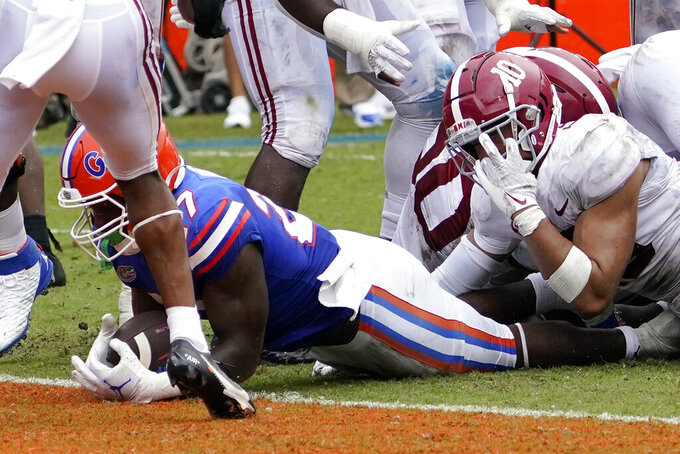 Florida running back Dameon Pierce, center, scores a touchdown past the Alabama defense including linebacker Henry To'oTo'o (10) during the second half of an NCAA college football game, Saturday, Sept. 18, 2021, in Gainesville, Fla. (AP Photo/John Raoux)

GAINESVILLE, Fla. (AP) — Later, Gators. Chameleons might be a better team name for Florida this season.

Coach Dan Mullen has successfully transformed his finesse offense — the one that led the nation in passing in 2020 behind Kyle Trask, Kyle Pitts and Kadarius Toney — into a formidable ground attack that nearly stunned top-ranked and defending national champion Alabama.

The Gators (2-1, 0-1 Southeastern Conference) currently rank second in the country in rushing, averaging 335.7 yards a game on the ground, after an offensive overall that required trust, adaptability and an unbelievable amount of buy-in from coaches and players.

No. 11 Florida, which hosts Tennessee (2-1, 0-0) on Saturday, ran for 244 yards and averaged 5.7 yards a carry in a 31-29 home loss to the Crimson Tide on Saturday and did so without dynamic, dual-threat quarterback Anthony Richardson. It was the highest yards-per-carry average against coach Nick Saban’s team since the Tide lost to Ohio State and star running back Ezekiel Elliott in the 2015 Sugar Bowl, a College Football Playoff semifinal game.

Elliott scampered for an 85-yard score late that essentially sealed the victory. Florida’s total included no runs longer than 30 yards, showing just how steady Mullen’s ground-and-pound approach was in the Swamp.

“He’s definitely probably the smartest coach that I’ve been around,” said sixth-year linebacker Jeremiah Moon, who had a front-row seat to Florida’s offensive evolution. “So there’s no surprise that he’s able to just flip the switch when it comes to whoever comes (into) this program. … He’s a mastermind; he’s a genius.”

Florida was mostly a passing team during Mullen’s first three years in Gainesville, culminating with last season’s record-setting aerial attack. Trask was a Heisman Trophy finalist. Pitts was a matchup nightmare. And Toney had more wiggle than anyone in the program since Percy Harvin.

The Gators averaged 378.9 yards a game through the air, the second-most in school history. The only Florida team with more passing prowess was coached by Steve Spurrier and led by quarterback and Heisman Trophy runner-up Rex Grossman (2001).

With Trask, Pitts and Toney all leaving for the NFL, Mullen turned the page – and tweaked the entire playbook.

“That’s what makes (Mullen) the guy that he is, the great head coach that he is,” starting quarterback Emory Jones said. “He’s able to adapt to whatever team he has and make the best out of it.”

Mullen opted to run, run, run because he had two quarterbacks (Jones and Richardson) who could create with their legs as well as their arms and an experienced offensive line that returned three starters. He also had so much talent and depth at running back that two five-star recruits – Clemson transfer Demarkcus Bowman and Miami transfer Lorenzo Lingard – have struggled to get on the field.

Richardson and Jones, though, are Florida’s leading rushers. With Richardson sidelined because of a hamstring injury against Alabama, Jones carried 19 times for 76 yards and a touchdown. The Gators botched a 2-point conversation late that would have tied the game.

“The worst thing I can ever say as a coach is, ‘I have a great system, but it doesn’t fit the players that we have so I guess it won’t work,’” Mullen said. “Ours is to always make sure it has enough adaptability within the system to make sure it fits whatever our personnel is at a given time.”

Mullen learned that the hard way in 2005, his first season as Florida’s offensive coordinator and his foray into the SEC. He remembers trying to get quarterback Chris Leak to direct a spread-option system that Alex Smith ran to perfection at Utah in 2003 and ’04.

It was a square peg in a round hole for weeks and resulted in ugly losses at Alabama and LSU. At the behest of coach Urban Meyer, Mullen and other offensive assistants spent several late nights during the team’s bye week retooling their much-maligned offense. They scrapped four- and five-receiver sets, did away with a bunch of QB runs and turned to a walk-on fullback to make a difference. Florida responded by beating Georgia in nearby Jacksonville.

“We have this unbelievable offensive system that we’ve created and, ‘Hey, it worked at Utah and we got to Florida and we’re going to have even better players here so we have all the answers,’” Mullen recalled. “And we didn’t.

Mullen has enjoyed offensive success ever since, in a variety of different ways. That gave him the confidence to make sweeping changes in the offseason and end up with a mauling style that gave the Chameleons, err Gators, a chance to knock off Alabama.

“I guess we are fortunate to have a bunch of years of knowledge of doing this, how to make it fit all the different styles of personnel that we’ve had over the last 20 years,” Mullen said.