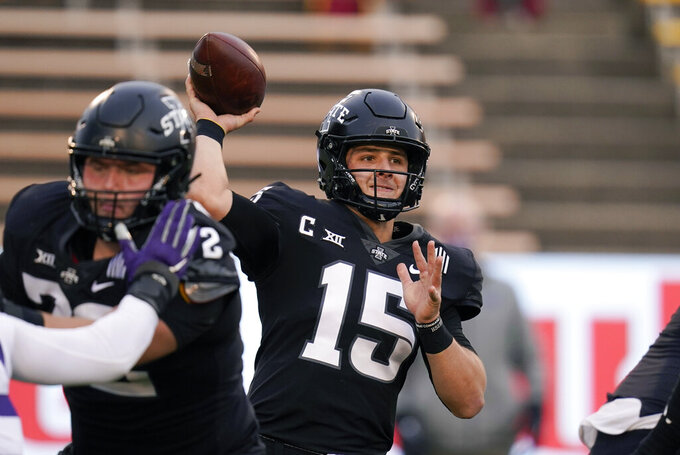 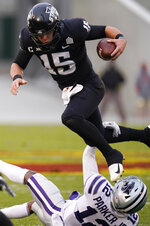 The Cyclones (6-2) cruised to their most-lopsided win over Kansas State in 77 years. They remain in first place in the Big 12 after improving to 6-1 in the conference and matching the school record for league wins.

Iowa State hadn't had such a wide winning margin against the Wildcats since beating them 48-0 in 1943. It was the Cyclones' biggest win over a Big 12 opponent since routing Kansas 45-0 three years ago.

“To me, it's not about offense and defense,” Iowa State coach Matt Campbell said. “When we play great football, we're playing as one team. It's playing together.”

Kansas State (4-4, 4-3), which won 11 of the previous 12 meetings, started to unravel after failing to score on an early first-and-goal from the 3.

“Our offense had a great first drive and couldn't finish and then sputtered after that,” Wildcats coach Chris Klieman said. “Frustrating in all phases. We need to improve.”

Purdy completed 10 of his first 12 passes for 156 yards to six receivers and all three of his touchdowns.

Breece Hall was Iowa State’s leading rusher with 135 yards and two touchdowns on 15 carries. Hall ran for touchdowns of 33 and 21 yards as the Cyclones pushed the lead to 35-0 before half.

“The whole offense, starting with our offensive line and quarterback, I think we had great precision," Iowa State receiver Xavier Hutchinson said after making six catches for 111 yards and a touchdown.

Kansas State struggled with quarterback Will Howard, who completed just three of his first 9 attempts and was replaced after throwing an interception late in the second quarter.

“I thought Will took a pretty good shot early in the second quarter and kind of got rattled a little bit,” Klieman said. “After he threw the interception, I thought ‘Let’s let Nick (Ast) have an opportunity.'''

“I don't know if that was completely by design,” Campbell said of Purdy's success running the ball. “I think it's more a tribute to Brock's continued growth.”

Iowa State, which outgained the Wildcats 539-149, now turns its attention to a key game at No. 22 Texas on Friday.

“The next six days are going to challenge everything we're about,” Campbell said. “This is a hard, tough sport. So getting a short week isn't easy.”

The Wildcats, who came into the week with 12 active cases of COVID 19, were missing starting linebackers Justin Hughes and Elijah Sullivan for undisclosed reasons.

“We got hammered with COVID the last two weeks and we can't worry about that,” Klieman said. “We have to move on from that. That's just the reality.”

No. 17 Iowa State will have a chance to move up after such an impressive win.

Hall became one of four FBS players since 1996 to have 100 yards rushing and one rushing touchdown in each of his first eight games in a season. He joins TCU's LaDainian Tomlinson in 2000, Iowa State's Troy Davis in 1996 and Virginia's Tiki Barber in 1996.

Hall also is now the first ISU player to run for 100 yards against every conference opponent.

Kansas State: At Baylor on Nov. 28