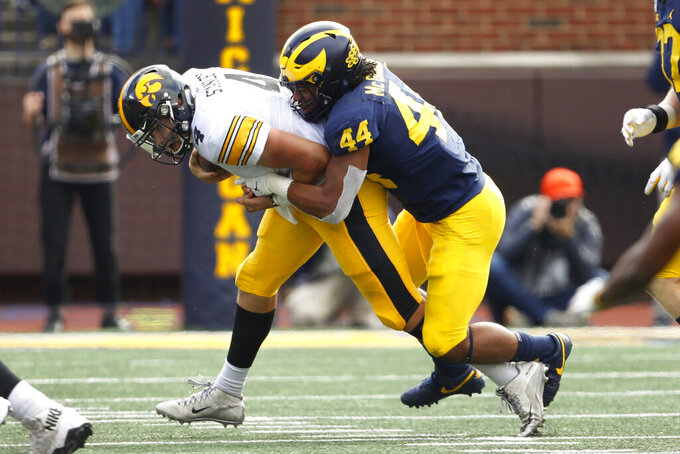 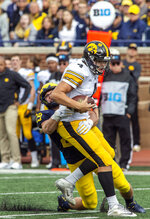 Penn State is next for the No. 17 Hawkeyes on Saturday night, and all the Nittany Lions have done this season is lead the nation in sacks.

The Hawkeyes know the blueprint is there for Penn State and everyone else.

"Yeah, if you put something on tape that you didn't pick up, you have to expect another team to bring that at you," center Tyler Linderbaum said Tuesday.

Quarterback Nate Stanley, on the receiving end of all of those hits from the Wolverines, thinks the challenge from the No. 10 Nittany Lions is just what Iowa needs.

"I think that's honestly the best thing that can happen for us," Stanley said. "We know these guys are a great defense, tops in the nation in a lot of statistical categories. We know that there's no time to feel sorry for us, that we have to get back on the horse and prepare and get ready to play."

"Their defense is very good," Iowa running back Toren Young said. "Their defensive line sticks out. They're big, they're fast, they're physical. They bring different blitzes and pressure. So we'll have to be locked in on those things when it comes to pressure."

Iowa's offense had 261 yards against Michigan. The eight sacks for 65 yards reduced the Hawkeyes' rushing total day to just one yard. Add in the eight penalties, including back-to-back 10-yarders late in the fourth quarter when Iowa had first-and-10 at the Michigan 25, and it was a full day of mistakes for a team that had been fundamentally sound to open the season.

"There's no one magic answer," coach Kirk Ferentz said. "We didn't play consistently enough. There are some good plays in there, certainly and didn't play consistently enough. The negative yardage plays are always going to affect you and part of that was our lack of execution, maybe part of that's Michigan, being a really athletic, aggressive defensive team but that being said, we are looking at the same kind of opponent this week.

"Penn State has got great athletes and they play hard and can be very disruptive, too. We are going to have to hopefully have a little tighter plan maybe and be a little bit tighter with our technique and a little better, more cohesive in our play."

Iowa was held without a touchdown for the first time this season, but the Hawkeyes knew they had their chances.

The consensus on Tuesday was it's about attention to detail.

"We were really close on things," Young said. "A lot of times, we were close. Sometimes you watch the film, and you get a little bit of confidence, because you know. Yeah, we lost, but we were close on some things. It just helps you realize how important the details are, how you need to do the little things. Eliminate penalties, getting your hands in the right place blocking."

The Hawkeyes (4-1, 1-1) didn't seem too interested in further analysis of the Michigan game.

"You just forget about it," wide receiver Ihmir Smith-Marsette said. "You know you took a loss. But ultimately, it's the next week. New game, new team. You can't let it linger."