No. 2 Alabama takes on No. 25 Arkansas in SEC West matchup 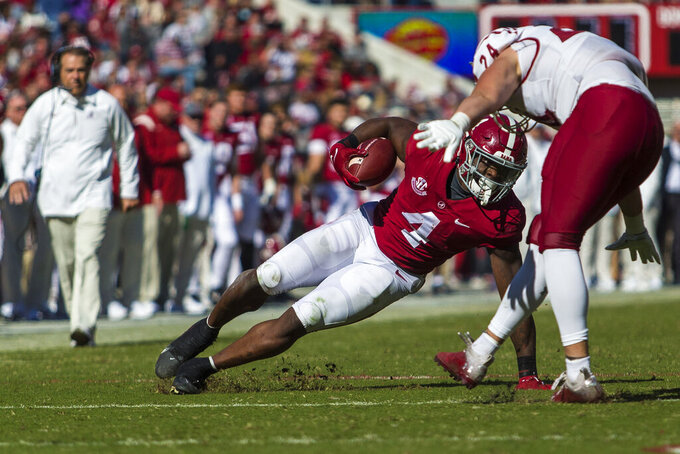 Alabama running back Brian Robinson Jr. (4) makes a hard cut on a run as New Mexico State linebacker Nick Giacolone (24) pursues during the first half of an NCAA college football game, Saturday, Nov. 13, 2021, in Tuscaloosa, Ala. (AP Photo/Vasha Hunt)

A look at Week 12 in the Southeastern Conference:

The host Crimson Tide are in the driver’s seat for another Western Division championship with a one-game lead over No. 10 Mississippi and holding the tiebreaker after beating the Rebels last month. They routed New Mexico State 59-3 in non-league play last week and can move a step closer toward clinching with a victory over the resurgent Razorbacks. Arkansas topped LSU 16-13 in overtime last week for their third consecutive victory that also earned the “Golden Boot” trophy. Alabama looks to finish 7-0 at home and averages 44.6 points and nearly 485 yards per game. The Tide have beaten the Hogs 14 consecutive times, including 52-3 last December. But they'll play without No. 2 rusher Roydell Williams, who injured his right knee last week and will need surgery.

Arkansas’ No. 6 rushing game faces Alabama’s third-ranked rushing defense. The Hogs managed “just” 141 yards last week against the Tigers but average 233.5 yards per game on the ground to rank second in the SEC. That’s impressive considering they don’t have a rusher among the top 10 in the conference. What they have is sophomore Dominique Johnson, who has gone from fifth string to lead the team with 456 yards and six touchdowns on 71 carries. Finding yardage will be tough against Alabama, which held non-league New Mexico State to just nine yards rushing last week. The Crimson Tide rank second in SEC rushing defense (81.5 yards per game) behind stingy Georgia and have allowed only Florida (246 yards) and LSU (109) past the century mark this season.

As if this season hasn’t been tough enough for Vanderbilt (2-8, 0-6), the Commodores and their SEC-worst defense faces the league’s best offense at Ole Miss. The ‘Dores are allowing 458.1 yards per game and rank 119th among 130 FBS teams. Meanwhile, the Rebels’ high-powered offense led by QB Matt Corral averages 522.2 yards (No. 3 FBS) and 36.9 points per game. Another offensive juggernaut awaits Vandy next week against rival Tennessee, but for now it must hope for the best as a 36.5-point underdog, according to FanDuel.com.

Mississippi State quarterback Will Rogers threw a school-record six touchdowns in last week’s 43-34 win over Auburn that also marked the program’s biggest comeback. The Bulldogs have a school-record 412 completions this season, shattering last year’s mark of 373. ... Florida allowed a season-high 530 yards against FCS Samford but won a surprising 70-52 shootout with 717 yards. ... Alabama QB Bryce Young completed his first 13 passes to finish 21 of 23 for a career-high 270 yards and five TDs against New Mexico State. He has 33 touchdowns and just three interceptions. ... Razorbacks quarterback KJ Jefferson threw for 142 yards against LSU, including a 43-yard TD. He has 1,990 yards passing and 17 scores with just three interceptions. ... Kentucky (5-3) clinched second place in the East for the first time since the SEC split into divisions in 1992.

Alabama junior receiver Jameson Williams has registered 441 yards and four TDs on 22 receptions the past three games with his two best efforts over the past two weeks in particular. Against LSU, he caught 10 passes for the second time this season for 160 yards and a score before following up with six receptions for 158 and three TDs against New Mexico State. Williams leads SEC receivers with 1,028 yards and 10 TDs and is averaging 20.2 yards per catch.