No. 2 Buckeyes vs No. 5 Irish: Big Ten's featured matchup 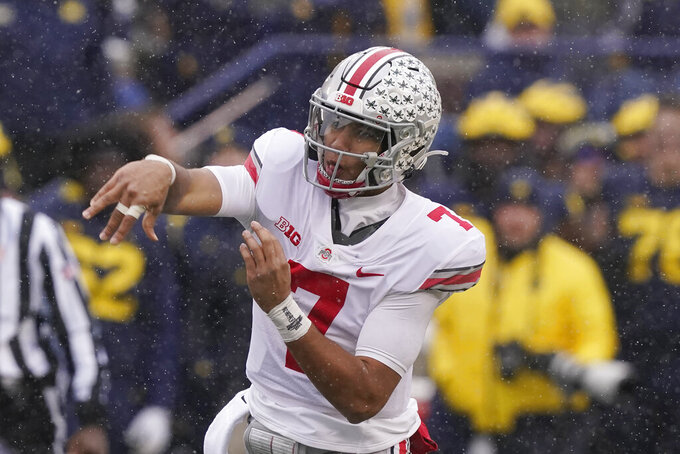 FILE - Ohio State quarterback C.J. Stroud throws during the first half of an NCAA college football game against Michigan, Saturday, Nov. 27, 2021, in Ann Arbor, Mich. The Fighting Irish open the season at No. 2 Ohio State, facing an offense that led the FBS in total yards and scoring last season and is only expected to improve in C.J. Stroud's second season as the starting quarterback. (AP Photo/Carlos Osorio, File)

Things to watch during Week 1 of play in the Big Ten Conference:

The Buckeyes lost to Michigan for the first time since 2011 and had their four-year run as Big Ten champion end. Coach Ryan Day said his team was “edgy” during the offseason, and the Saturday night game against the Irish should be a good gauge for what's possible for the Buckeyes.

Offense should be no problem with C.J. Stroud, surrounded by many of the playmakers who helped the Buckeyes score better than 45 points per game. Day's most important move was hiring Jim Knowles away from Oklahoma State to shore up an underperforming defense.

Adding intrigue to the matchup is that Marcus Freeman, a linebacker for the Buckeyes from 2004-08, begins his first full season as Notre Dame coach.

Oddsmakers obviously believe in the Buckeyes. They're favored by 17.5 points, according to FanDuel Sportsbook.

Purdue offense vs. Penn State defense. The Thursday night opener is a great measuring stick for Purdue. The Boilermakers are preseason darlings following a nine-win season that included two wins over top-five opponents and ended with an overtime bowl victory over Tennessee. Aidan O’Connell is out to build on one of the best passing seasons in program history.

Penn State is in bounce-back mode. The Nittany Lions were ranked No. 4 following a 5-0 start and lost six of their last eight. QB Sean Clifford returns, but there are lots of questions about the Nittany Lions as they attempt to rise from middle of the pack in the Big Ten East.

Indiana will go for its fourth straight win in the series with Illinois, which visits Bloomington on Friday night. Illini will be trying to win its Big Ten opener in consecutive seasons for the first time since 1990-91. ... Defending conference champion Michigan enters its game against Colorado State 10-0 all-time against current Mountain West teams. The Wolverines are 16-0 under Jim Harbaugh in nonconference home games. ... Northwestern's 31-28 win over Nebraska in Ireland last week marked the first time since 2016 that the Wildcats had at least 300 yards passing and 200 yards rushing in a game.

South Dakota State will be the underdog going into its opener at Iowa. Fanduel Sportsbook has not put out a point spread on the game, but the Hawkeyes should expect a challenge from the Jackrabbits of the Championship Subdivision.

SDSU beat Colorado State convincingly last year and is in the top three of the preseason FCS polls. The Jackrabbits also have advanced to the semifinals or finals of the playoffs four of he last five years.

Minnesota RB Mohamed Ibrahim is back after sustaining a season-ending leg injury in last year's opener. Ibrahim has 14 career 100-yard rushing games, including the last nine in a row. He's the eighth Minnesota player to reach 3,000 career yards and should have no problem adding to his total against a New Mexico State team that was 112th against the run last year.